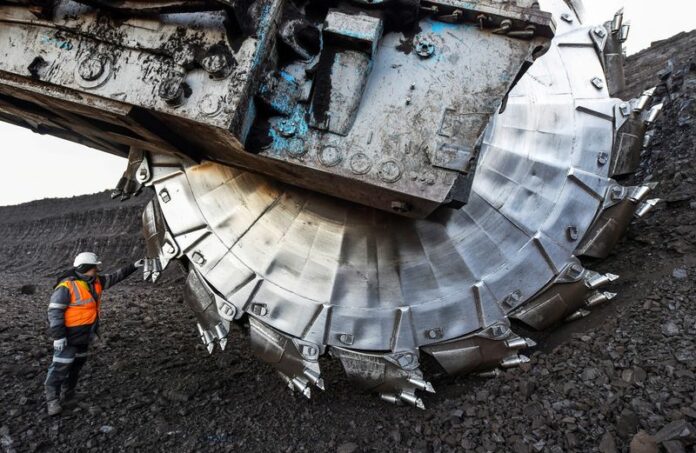 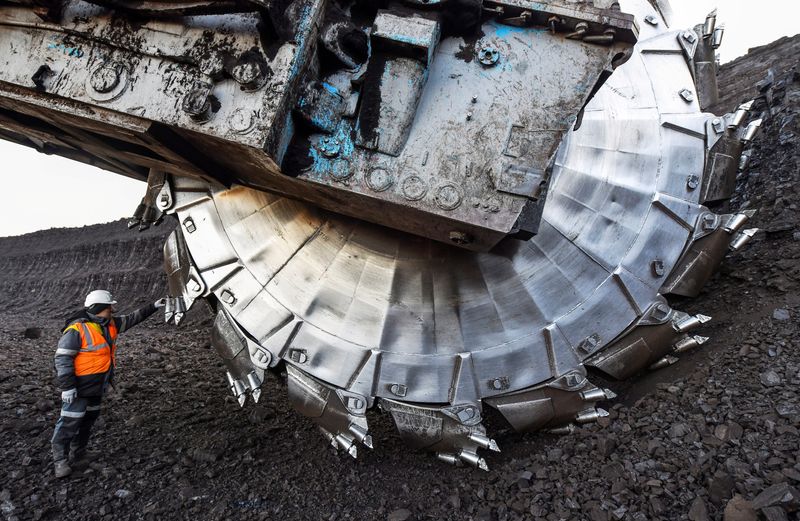 © Reuters. FILE PHOTO: A worker stands next to a cutting wheel of an excavator at Borodinsky opencast colliery, owned by the Siberian Coal Energy Company (SUEK), near the Siberian town of Borodino east of Krasnoyarsk, Russia April 19, 2022. REUTERS/Alexander Manzyuk

By Muyu Xu and Maxim Nazarov

SINGAPORE/MOSCOW (Reuters) – Russian coal exports to energy-hungry China have jumped by about a third this year but the supply boom is being constrained by transport infrastructure limitations, industry sources and officials said.

China is seeking coal supplies from overseas, in particular after recent COVID-19 outbreaks in the major coal mining regions of Inner Mongolia and Shaanxi forced many mines to close, while coal demand at power generation and heating sectors will soon pick up with the coming of winter.

The Kremlin plans to increase its energy supplies to Asia, China in particular, to offset a slump in exports to the West, which has imposed sanctions on Russia over the conflict in Ukraine.

Russia is the world’s sixth-largest coal producer and one of top coal exporters, along with Indonesia and Australia. Its share of global coal exports reached 17% last year with supply of 223 million tonnes.

But now with more exports heading east towards Asia as opposed to west towards Europe, bottlenecks are appearing.

“Many of us were informed by the sellers that there will be delays on loading and arrivals, which causes trouble to our business,” a Chinese coal trader said.

Another source said that some traders were simply told by sellers or miners that a coal shipment was cancelled due to the lack of rail capacity and could be delayed for weeks.

Russian First Deputy Prime Minister Andrei Belousov has acknowledged the problem with infrastructure constraints, saying this month that the situation with coal exports and congestion on the rail system had not stabilised, though it was improving.

China’s coal imports from Russia fell to 6.95 million tonnes last month, down from a peak of 8.54 million tonnes in August, according to China’s customs data.

According to Russian transport industry sources, Russia has increased coal supplies to China by railways by about a third this year, to 27.6 million tonnes in the January-August period.

But the increase in cargo traffic has led to slower deliveries.

According to a Reuters analysis, it took about 12.6 days to deliver a coal cargo from fields in Siberia, such as Kuzbass, to Russia’s Pacific ports in July-September, compared with 11.3 days on average in the same period last year.

On average, delivery time across Russia has increased by a fifth, or 1.4 days, according to Reuters analysis of railway data, and timings may increase in the winter due to the railway congestion and port capacity limitations.

“We would expect China’s coal imports from Russia to decrease due to the cool weather, which will limit port loading, and the rail logistics cap will also help to put a lid on,” the Chinese coal trader said.

But Russia now expects its coal exports to decline in coming years due to the Western sanctions over the Ukraine conflict, and U.S., European Union and British embargos on Russian coal imports.

According to Russian government expectations, coal exports may fall by 22% this year and by a further 31% in 2023.

But at the same time, the rush of east-bound exports is getting bogged down.

“A lot of railcars accumulate, congestion is formed at port stations … Turnaround times for railcars are increasing significantly. Shippers are looking for empty railcars,” a Russian transport industry source said.