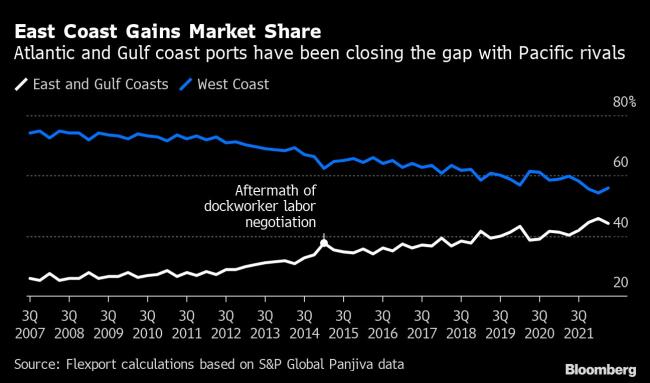 (Bloomberg) — A labor deal between 22,000 dockworkers at US West Coast ports and their employers may take several months to reach, but service disruptions while negotiations continue are unlikely, according to the chief of the Port of Los Angeles.

“It’s not going to get solved in the next few weeks — it will probably take some several months and there is no hard deadline on this,” Executive Director Gene Seroka, whose port is the nation’s busiest, said in an interview at Bloomberg’s New York headquarters Monday. He added that his view doesn’t represent those of employers or the union negotiating on behalf of the workers.

The International Longshore and Warehouse Union and the more than 70 employers represented by the Pacific Maritime Association began negotiating a new contract for 22,000 West Coast dockworkers in May, and have continued to do so after their previous deal expired July 1.

The parties have said they’re committed to avoiding a repeat of the nine months of disruptions and shipping delays that ensued when they last negotiated a full contract in 2014 and 2015. Those snarls only ended after the Obama administration intervened.

Seroka said he isn’t worried about the chance the parties will fail to reach a deal. “I think the probability of work disruption is extremely low,” he said.

The talks take place as the world’s 11 biggest container lines are on course to post $256 billion in profit in 2022, which would exceed last year’s record by 73%, according to industry veteran John McCown, the founder of Blue Alpha Capital. Logistics and labor strains that are squeezing capacity amid sustained US demand for imports have buoyed the windfall.

“These dockworkers have real issues on the table and worked through the pandemic like many others did,” Seroka said. “The industry has made a tremendous amount of money over the last three years — that money should be shared.”

He said worker protections need to be put in place based on lessons from the pandemic, and that automation and robotics on the ports — which will keep being rolled out — are polarizing industrial-relations issues.

“We’re going to continue to move faster with technology development — we just cannot leave the worker behind,” Seroka said. “If we keep those postulates together, we’ll get through this in good order.”

Los Angeles is the biggest gateway for containerized trade with Asia, and handles about 40% of all US imports together with the neighboring Port of Long Beach.

While both operations handled record volumes throughout the pandemic as homebound consumers shifted spending to goods from services, the numbers have eased both as Americans allocate more resources to services and as importers divert cargo to East and Gulf Coast ports to avoid a repeat of Covid-era supply-chain logjams while the labor talks unfold.

Southern California ports haven’t seen any service degradation while the talks have been ongoing, but East and Gulf Coast maritime hubs are seeing more cargo “based on the perception of this contract negotiation,” Seroka said.

“We’ve got to give people confidence that their cargo is not going to get snarled up, and they will have some consistency in their supply chain,” the LA port chief said. “I’d love to see this contract done,” he said, adding, “I get no satisfaction whatsoever by seeing ships and anchor in Houston and Charleston, in New York, because that’s making our country less competitive economically.”