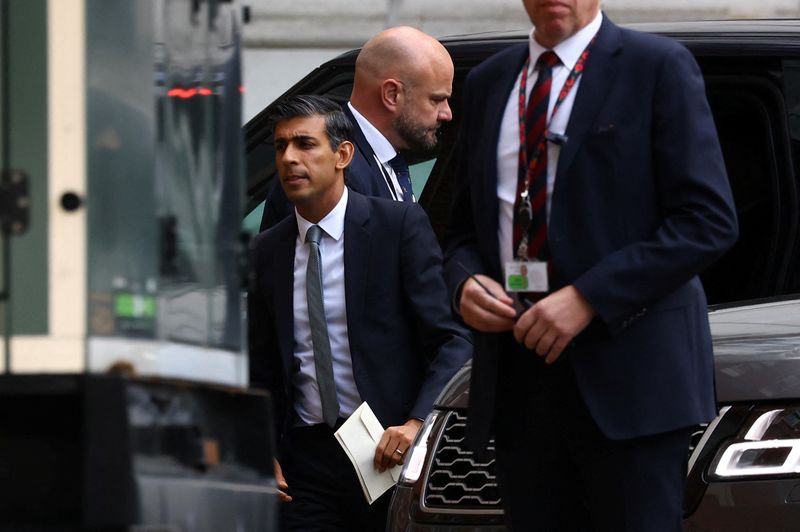 LONDON (Reuters) -After seven weeks in which Britain’s reputation for financial credibility has been rocked by political missteps, senior finance executives have given new prime minister Rishi Sunak a cautious welcome.

Sunak is a known quantity to Britain’s banks, asset managers and insurers, having previously run the country’s finance ministry for two years as the COVID-19 pandemic took its toll on the economy.

Finance bosses are hopeful his new administration will have a steadying influence on markets, after the deep tax-cutting plans of his predecessor Liz Truss spooked investors and sparked a chaotic sell-off of government bonds that forced the Bank of England to intervene.

“Policy stability is absolutely critical,” Miles Celic, chief executive of finance lobby group TheCityUK told Reuters. “An ongoing radical swing of the pendulum on policy is something that in any country is unhelpful.”

“There are some areas where I think there is potential for improvement to drive greater competition,” HSBC CEO Noel Quinn told Reuters, adding he welcomed recent moves to embed competitiveness into regulators’ objectives.

One concern among bankers are mooted plans under reappointed finance minister Jeremy Hunt to collect more tax from banks – with a decision set to be made by the time fiscal plans are laid out on Oct. 31.

Business groups have long argued for tax cuts, saying that the country has an uncompetitive tax system for banks, with both a levy on balance sheets and a tax surcharge.

Sunak’s elevation to the top job has relieved some of the nervousness around the outlook for the UK economy, boosting domestic markets and easing borrowing costs, according to analysts.

“There’s a huge amount of concern in the City that the UK’s reputation for sound policymaking has been damaged, but there is scope now for a reset,” said William Wright, CEO of think tank New Financial.

Sunak confirmed on Tuesday that he was keeping Hunt as his finance minister, after he was appointed late in Truss’ brief premiership to shore up confidence in Britain’s finances – and tear up much of her planned tax-cutting agenda.

One London-based senior banker at a global bank said they were hopeful they would not have to spend as much time explaining Britain’s political turmoil to international colleagues.

The Conservative party’s actions – along with the Bank of England’s earlier intervention to calm bond markets – showed Britain had “built-in mechanisms to correct itself” that would provide some reassurance internationally, the person added.

Sunak said shortly after becoming prime minister in a speech outside 10 Downing Street that he wanted to build an economy that “embraces the opportunities of Brexit”, hinting that more deregulation could be on the cards.

Exports of financial services from Britain to the EU fell 19% in cash terms between 2018 and 2021, according to parliamentary research published last month, compared to a 4% growth in exports to non-EU countries over that period.

Sunak – a former Goldman Sachs (NYSE:GS) analyst and hedge fund partner – has previously outlined his thinking on the finance sector in some detail, with a new bill that is now going through parliament.

It introduces regulation on stablecoins and easing capital rules for insurers, along with giving regulators a new competitiveness objective. The industry is pressing for speedy implementation.

“Delivering on the secondary objective for the financial regulators to promote growth and international competitiveness in the Financial Services and Markets Bill will support this agenda,” said Chris Hayward, policy chairman at the City of London Corporation, which runs the ‘Square Mile’ financial district.

Liz Truss’ finance minister Kwasi Kwarteng promised to go further to “unshackle” to City of EU rules by easing insurance capital rules further than planned, and a finance ministry source said last week an additional package of measures was still on the cards.

There is little sign so far that a blowup in the pensions sector following Kwarteng’s package of unfunded tax cuts will put on hold more radical changes to insurance rules.

Plans for the finance ministry to have powers to veto rules written by the Bank of England and Financial Conduct Authority have, however, met opposition from the BoE.

Kwarteng’s initial push for more radical measures, such as scrapping an EU-derived cap on banker bonuses – have survived the political tumult for now.

Yet lower corporate taxes and scrapping a levy on their balance sheets, along with making it far easier to hire talent from abroad, doesn’t appear to be on the cards. On the contrary, Hunt is weighing a potential tax raid on banks.

“There could be a political statement of intent by Sunak and Hunt to say to banks ‘You’re important to the economy, but we have bills to pay’,” said New Financial’s Wright.

The current surcharge on bank profits is being reviewed and the level is set to be confirmed by Hunt at the end of the month. Any moves to extract more tax from banks are likely to be met with industry opposition.

“We have no god-given right to success. And we need to be careful about protecting the things that underpin the UK’s success as an international financial centre,” said TheCityUK’s Celic.

“We’re keen to work with government to ensure we’re heading forward in the right way, in a positive and constructive way.”