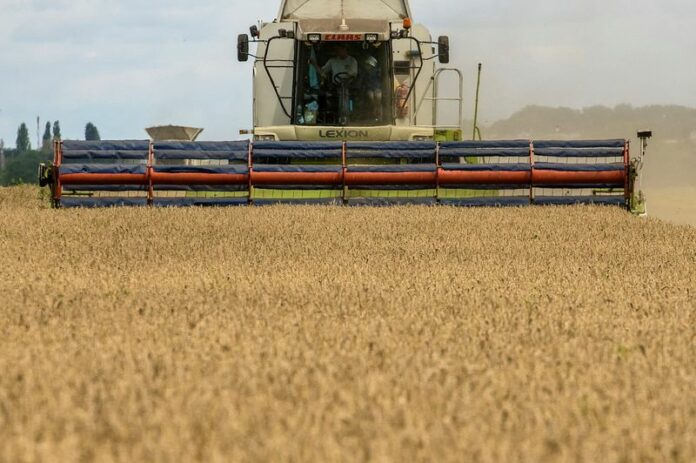 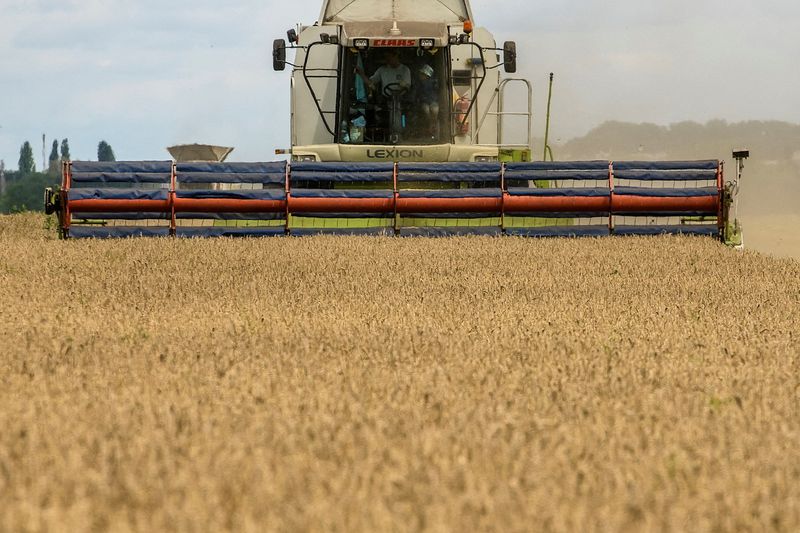 © Reuters. FILE PHOTO: A combine harvests wheat in a field near the village of Zghurivka in Kyiv region, Ukraine August 9, 2022. REUTERS/Viacheslav Musiienko/File Photo

(Reuters) -Russia has suspended participation in a U.N.-brokered deal to export agricultural produce from Ukrainian ports after attacks on ships in Crimea, Russia’s defence ministry said on Saturday, dealing a blow to a three-month agreement aimed at easing a global squeeze on grain supplies.

Russia said that Ukrainian forces, with the help of drones, attacked ships from the Black Sea Fleet in Sevastopol, the biggest city in Russian-annexed Crimea, in the early hours of Saturday.

“Taking into account… the terrorist act by the Kyiv regime with the participation of British experts against the ships of the Black Sea Fleet and civilian vessels involved in ensuring the security of the ‘grain corridor’, the Russian side suspends participation in the implementation of agreements on the export of agricultural products from Ukrainian ports,” the ministry said in a statement.

The ministry said earlier that the drone attacks on Saturday were largely repelled, with minor damage to a Russian minesweeper.

The Ukrainian president’s chief of staff, Andriy Yermak, accused Russia of “blackmail” and “invented terror attacks” on its own territory on Saturday following explosions in the Crimea peninsula on Saturday.

His comments were an apparent response to Russian accusations that Ukraine was behind the blasts.

Separately, Russian Agriculture Minister Dmitry Patrushev said earlier on Saturday that Russia was ready to supply up to 500,000 tonnes of grain to poor countries in the next four months for free, with assistance from Turkey, and supplant supplies of Ukrainian grains.

“Taking into account this year’s harvest, the Russian Federation is fully prepared to replace Ukrainian grain and deliver supplies at affordable prices to all interested countries,” he said.

Since Russia and Ukraine signed the U.N.-backed Black Sea Grain Initiative in Turkey on July 22, several million tonnes of corn, wheat, sunflower products, barley, rapeseed and soya have been exported from Ukraine.

United Nations aid chief Martin Griffiths had said only on Wednesday that he was “relatively optimistic” that the deal would be extended beyond mid-November.

Under the agreement, Ukraine was able to restart its Black Sea grain and fertilizer exports, which had stalled when Russia invaded its neighbor on Feb. 24. The Ukraine export deal was initially agreed for 120 days.

In a separate statement, the Russian foreign ministry said that following the attacks on Russian ships “the Russian side cannot guarantee the safety of civilian dry cargo ships participating in the “Black Sea Initiative”, and suspends its implementation from today for an indefinite period.

“Relevant instructions were given to Russian representatives at the Joint Coordination Center in Istanbul, which controls the transportation of Ukrainian food,” it added, referring to Turkey’s role in implementing the deal.

Late on Friday a spokesman for U.N. Secretary-General Antonio Guterres had appealed to the parties to renew the pact.

“We underline the urgency of doing so to contribute to food security across the world, and to cushion the suffering that this global cost-of-living crisis is inflicting on billions of people,” U.N. spokesperson Stephane Dujarric said.

Dujarric said that “governments, shipping companies, grain and fertilizer traders and farmers all over the world” were looking for clarity on the future of the deal.