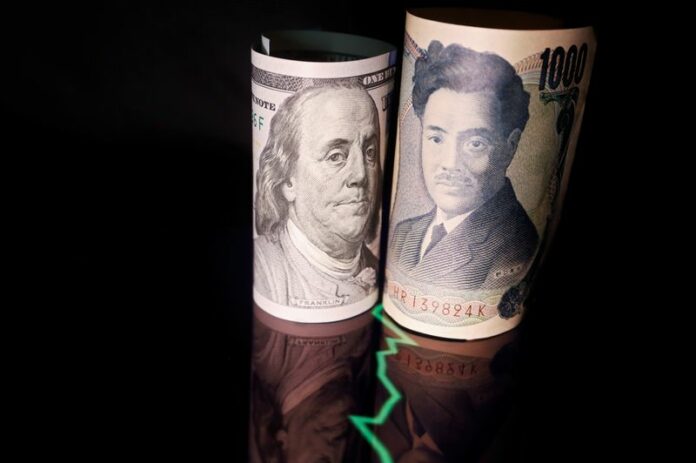 NEW YORK (Reuters) -The yen fell more than 1% against the dollar on Friday after the Bank of Japan bucked the trend among other major central banks and stuck with ultra-low interest rates, while the greenback firmed after U.S. data showed inflation was still running hot.

The greenback was under pressure this week ahead of the Federal Reserve’s Nov. 1-2 policy setting meeting. The central bank is expected to raise rates by 75 basis points for the fourth-straight time before “pivoting” to a slower pace of rate hikes, which the market has begun pricing in.

“The bottom line is that if the Fed does not pivot toward a more forward-looking stance, the result will be a more restrictive monetary policy than otherwise required,” said Admir Kolaj, an economist at TD Securities.

The dollar index was on track for a weekly decline of around 1%.

Speculation over the timing of a Fed pivot has weakened the dollar, yet the greenback still gained on the yen after BOJ Governor Haruhiko Kuroda said Japan was nowhere near raising rates, with inflation in the country likely to fall short of its 2% target for years to come.

Kuroda dismissed the view the BOJ’s yield cap was to blame for recent sharp declines in the yen, reinforcing views that the central bank will not use rate hikes to prop up the currency.

“The BoJ still carries the baton as the most accommodative G7 central bank,” said Stephen Innes, managing partner at SPI Asset Management. “That leaves USDJPY very much at the mercy of broad dollar trends that, in turn, reflect moves in U.S. fixed income.”

Sterling rose against the dollar, adding to gains earlier in the week following the appointment of Rishi Sunak as Britain’s third prime minister in two months. The pound was up 0.39% at $1.1609, on track for a weekly rise of around 2.65%.

The euro dipped 0.1% to $0.9955, adding to Thursday’s more than 1% drop after the European Central Bank raised rates by 75 basis points, as expected, but took a more dovish tone on its rate outlook. For the week, euro was up around 0.93%.

The common currency was somewhat supported by German data, which showed that Europe’s biggest economy unexpectedly avoided a recession in the third quarter, while inflation, driven by a painful energy standoff with Russia, surprised to the upside.

U.S. data on Thursday showed that consumer spending rose more than expected in September while underlying inflation pressures continued to bubble, keeping the Fed on track to hike interest rates by 75 basis points next week.

“The data that came in this week gave Fed Chairman Jerome Powell a lot of credit because he has been adamant about the economy being strong enough to withstand the hikes,” said Juan Perez, director of trading at Monex USA.

“A strong economy leads to faith in the economy but inflation must be battled with high rates, which only make the dollar stronger,” he said.

The more dovish ECB and the Bank of Canada’s smaller-than-expected interest rate hike this week helped drive expectations of a Fed pivot.

The dollar was also firmer against the Swiss franc and the Australian dollar.