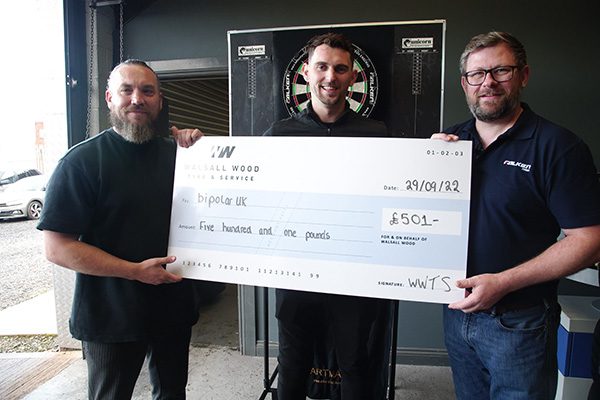 Falken Looking to Wade in with Charity Support

World darts star James Wade will have an additional incentive when he heads to the European Championships in Dortmund next week, after sponsor Falken tyres agreed to pledge a ‘ton’ of charity cash for every time ‘The Machine’ check-outs more than 100.

Wade, currently ranked five in the World, has just embarked on a rally from Scotland to London, in a car purchased for £501, in order to raise money and awareness for Bipolar UK – a charity close to his heart as he is a sufferer and also a patron of the organisation.

The initiative saw the former mechanic raise around £4,500 in total, and Falken is now hoping to help him tip the £5,001 target by putting £100 into the pot for all of the check-out ace’s big finishes during the TV event.

Known for his big finishes, James is relishing the challenge and believes it will give him extra motivation.

He said: “Every time I get to the board with a finish in the low hundreds, I fancy myself to do it, now I will also be thinking about banking an extra hundred pounds for Bipolar UK.

“It is a great fun way of Falken engaging with my games and supporting me, and we have formed a great partnership around the charity rally.

“I enjoyed travelling to the garages and meeting their teams and this is a great gesture to help me get to the £5,001 mark – hopefully I can make a good start to the tournament and do it instyle!”

Graham Mitchell, director of MTS Wholesale which manages the Falken brand in the UK, said: “We have had a fantastic, fun start with our partnership with James and our customers are loving the opportunity to get so close to him.

“We wanted to further support his Bipolar UK event and at the same time give garages and Falken customers a reason to tune in and cheer him on next week – hopefully this incentive will do just that.”