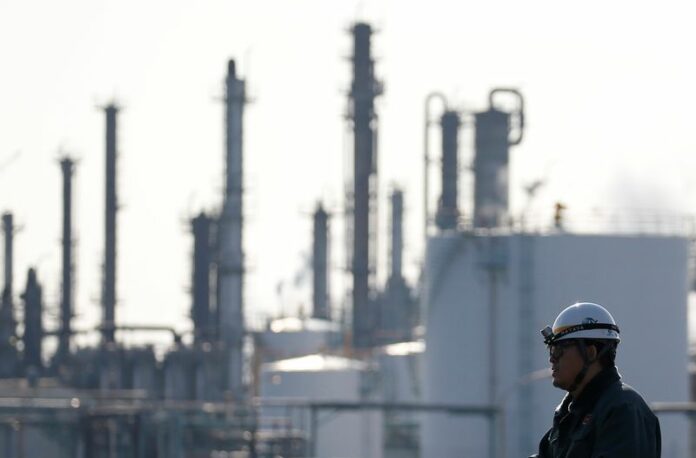 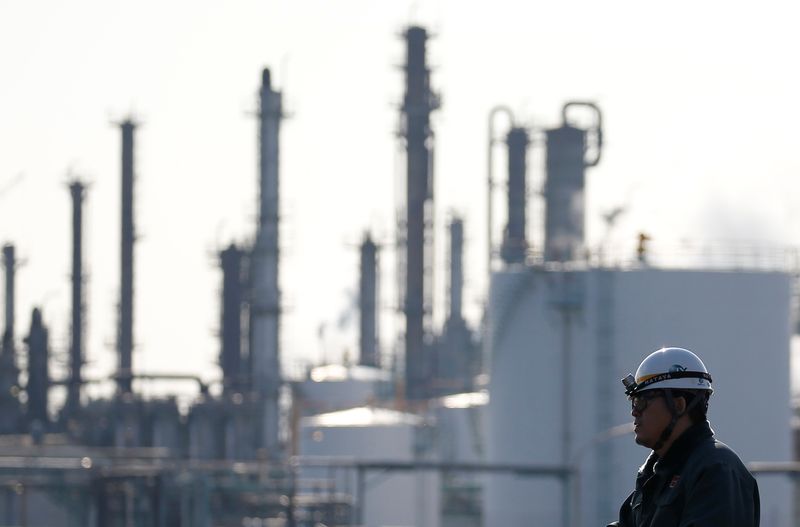 © Reuters. FILE PHOTO: A worker walks near a factory at the Keihin industrial zone in Kawasaki, Japan February 28, 2017. REUTERS/Issei Kato

By Kantaro Komiya and Sakura Murakami

TOKYO (Reuters) -Japan’s factory output fell in September for the first time in four months as manufacturers grappled with rising raw materials costs and global economic slowdown, and is likely to fall again next month before picking up in November, the government said.

In a brighter sign for the world’s third-largest economy, retail sales grew for a seventh consecutive month, raising hope for a sustainable boost in consumption after the easing of COVID-19-related inbound border controls earlier in October.

Factory output fell a seasonally adjusted 1.6% in September from a month earlier, government data showed on Monday, deeper than economists’ median forecast of a 1.0% decline. That marked the first month-on-month fall in four months and followed a 2.7% rise in August.

A 12.4% decline in auto-related production – the sector’s steepest fall in eight months – drove down the overall index.

Automakers and suppliers have struggled with a shortage of semiconductors, exacerbated by COVID-19 lockdown measures in China where many Japanese firms have factories or suppliers. Reuters reported last week that Toyota Motor (NYSE:TM) Corp has told suppliers to lower production targets for 2022.

Manufacturers surveyed by the Ministry of Economy, Trade and Industry (METI) expected output to fall another 0.4% in October and rise 0.8% in November.

COVID-19-induced supply bottlenecks are easing, but demand-side risk from global economic slowdown could drag on output, a METI official said at a media briefing, adding manufacturers’ confidence in the business environment remains weak.

While the annual consumer inflation rate was at 3.0% in September, the prices firms charged each other rose 9.7% in the same month.

Inflationary pressure in import-reliant Japan has been amplified by a prolonged slide in the yen, which hit a 32-year-low against the U.S. dollar this month.

“We haven’t heard much from manufacturers that the weak yen is positive per se for their production,” the METI official said based on its factory output survey. “Rather, with rising procurement costs on the weak yen, coupled with (higher) energy prices, some firms have voiced concerns for their business conditions.”

On Friday, the government announced a 39 trillion yen ($264 billion) stimulus package as an inflation countermeasure funded by an extra budget of 29.6 trillion yen, while the Bank of Japan decided to keep its ultra-loose monetary easing policy unchanged to support the economy, even with the risk of aggravating yen weakness.

On a seasonally adjusted month-on-month basis, retail sales grew 1.1% in September, rising for a third month.

A further bounce is widely expected in coming months after Japan eased border controls on Oct. 11 for foreign tourists.

“But we may not see a full return to pre-pandemic levels” soon, since Chinese tourists still face strict border controls back home, said Dai-ichi’s Koike.