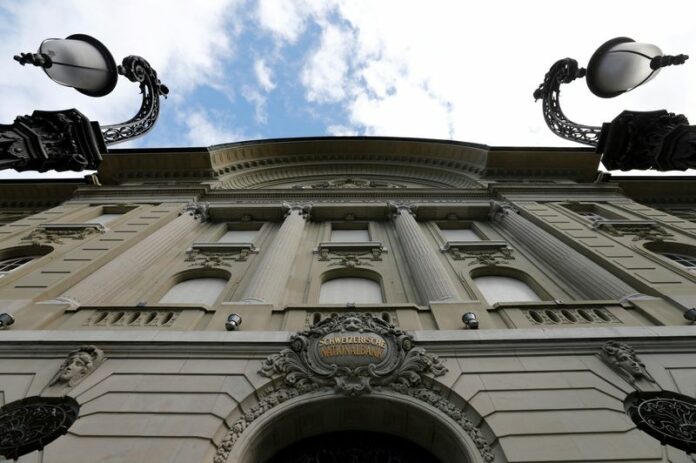 ZURICH (Reuters) -The Swiss National Bank lost 142.2 billion Swiss francs ($142.60 billion) in the first nine months of 2022, it said on Monday, as rising interest rates and the stronger Swiss franc slashed the value of the central bank’s foreign investments.

The loss – the largest in the SNB’s 115-year history – was slightly more than the annual economic output of Morocco ($132 billion), but the central bank does not face bankruptcy thanks to its ability to create money.

The SNB made a loss of 141 billion francs from its foreign-currency positions as the bonds and stocks bought during its campaign to stem the appreciation of the safe-haven franc slid in value.

The figure included exchange rate-related losses of 24.4 billion as the stronger franc further reduced the value of its holdings, which include stakes in coffee retailer Starbucks (NASDAQ:SBUX) and Google owner Alphabet (NASDAQ:GOOGL).

“These losses may sound like a lot, but the SNB is not a normal company,” said UBS economist Alessandro Bee.

“The problem is the stagflationary environment where equities lose, bonds lose, gold loses and the Swiss franc becomes stronger. Normally bonds and gold gain when equities lose. But that’s not happened in 2022.”

“Normal bankruptcy rules” do not apply, he added, noting that the SNB, which made a 41.4 billion franc profit a year earlier, would always be liquid as long as there is demand for Swiss francs.

The loss could, however, mean that the central bank halts payouts to the Swiss federal and cantonal governments next year.

Canton Zurich received 716 million francs as its share of the 6 billion francs distributed by the SNB this year, but said it knew there was no guarantee of the central bank cash.

Nearby canton Zug said omitting an SNB payout would be no problem.

“The SNB is not a normal bank, it’s a central bank which has other tasks such as price stability and protecting the Swiss economy,” Heinz Taennler, Zug’s finance director, told Reuters.

“We are not dependent on the payment from the SNB, but I can’t say if that’s the case for other cantons.

Continued massive losses could wipe out the SNB’s equity, which stood at 204 billion francs at the end of 2021.

The SNB, which has recently started hiking interest rates to combat inflation, declined to comment on the loss or what it would mean for a payout or its more restrictive monetary policy.

Still, Vice Chairman Martin Schlegel indicated a slide into negative equity would not alter the central bank’s approach. He also expected a positive long-term return on the bank’s investments.

“We can pursue our tasks and fulfill our mandate even with negative equity capital,” he said in an interview published on Friday.

“Nevertheless, it is important that we have enough equity. It helps the credibility of a central bank if it is well capitalized.”