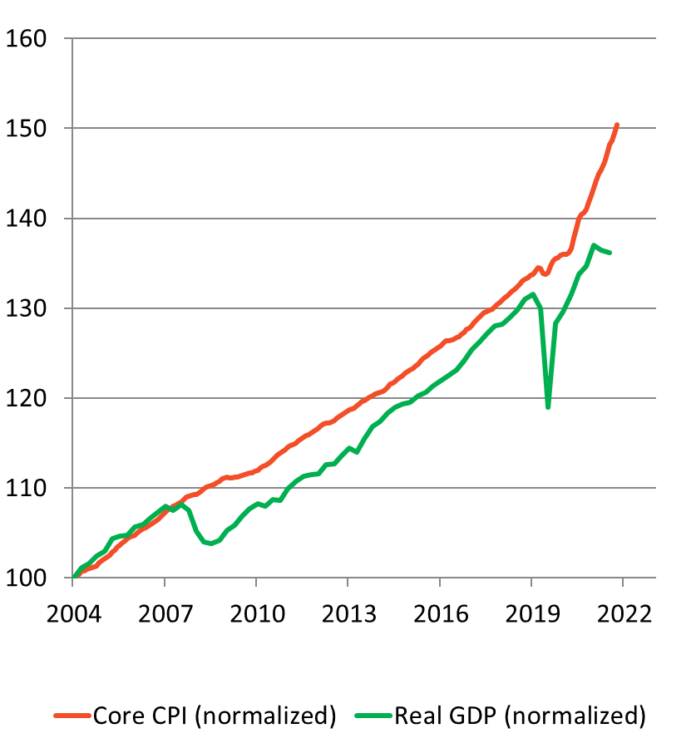 The market has been pricing in a relatively rapid pivot by the Fed after this week’s expected 75bps hike
However, given the persistency in inflation and the Fed’s firm stance, I believe a pause is more likely
Monetary conditions remain more likely to damage the economy than inflation per se

We are only a couple of days removed from the next FOMC meeting when the U.S. Central Bank will almost certainly raise the overnight rate by 75bps to a full 4%.

Last week, there was tremendous market optimism that the Fed will clearly signal that they will begin to taper the size of their rate hikes going forward, probably peaking at 5%. That has been my view for a little while, but it is now fully reflected in market prices, so that’s not worth any more. Indeed, it seems to me that the market is pricing a relatively rapid pivot to cutting rates.

Admittedly, a year ago, I, too, thought the Fed would rapidly lose its nerve once something broke. So far, though, nothing has broken, and the Fed has surprised many of us with its resolute hawkishness. I don’t think the Fed is eagerly waiting to cut interest rates once they achieve their ultimate target, and in fact, I think the pause is likely to be a year or more.

Partly, that’s because inflation will be declining, but only slowly—so the Fed will be frozen between tightening because inflation is still too high and lowering rates because of weak growth and inflation that is at least heading in the right direction. This, of course, remains to be seen, but my point is that the market is pricing in a very optimistic path for rates and inflation, and most of the ways that can be wrong are bad for markets.

The Fed’s progress on breaking the economy has proceeded nicely. In my article last week, I noted that the Fed’s tool for decelerating economic output is not the same as its tool for restraining inflation. They were once joined because the level of required reserves (which influences the money supply) also influenced interest rates. These are now sundered since banks are not reserve-constrained. So the real question is, why does the Fed want to slow economic output?

The strongly-held belief is that recessions cause disinflation, but they don’t. I’ve probably run this chart before, but it’s worth looking at repeatedly. In the two largest contractions of the last 100 years, core inflation never went negative and, in fact, barely slowed at all and not for long. Of course, this is so—if it were not, stagflation would never happen. No, it is money growth that causes inflation. And it isn’t “kinda”—the relationship between high money growth and high inflation is very strong. I’m using the following chart in my conference speech next week.

It couldn’t be simpler: it’s a plot of the peak growth in M2 for each of these countries/regions against the peak CPI growth so far. The U.S. has actually been very lucky to date. Do note that this is core inflation, so the spike in energy from “Putin’s price hike” is not a factor. Once the inflation episode is over, this chart will look much better if we take the aggregate M2 growth and the aggregate increase in core prices over the whole episode, but it’s a pretty striking chart, I think, just on these terms. Now, there’s good news here, although it’s tentative so far: M2 growth has flattened out recently. If M2 growth truly goes to zero, the inflation problem will eventually disappear. It wouldn’t happen as fast as you think, though, since the price level has far to go to catch up with the prior increase in the money supply—but it would happen.

I am pretty surprised by the U-turn in money growth, but it’s still a short-lived phenomenon. I’ll be much more optimistic if M2 growth can stay flat for another six months. Stay tuned.

Taking A Step Back

The flip side to the decline in money supply growth is that we’ve also had an acceleration in monetary velocity. In the latest quarter, the velocity of M2 rose 1.8%, and its 5.0% rise over the last four quarters is the fastest since 1995. Velocity has been in a general downtrend, along with interest rates, since about that time, so jumps have been relatively rare by any measure.

Normally, velocity responds to expected returns of alternatives to cash—bonds, stocks—and to uncertainty which causes consumers to hold more precautionary cash than they otherwise would. But in the COVID crisis, there was an additional effect, and that’s that the money was flushed into consumers’ pockets so quickly that prices and output (especially given the shutdown) couldn’t adjust quickly enough – so, mathematically, V=PQ/M had to decline. But in such a case, velocity is acting as more than an economic variable: it’s acting as a capacitor, holding energy temporarily and then releasing it as the other variables in this equation move toward equilibrium.

So the deceleration in M2 is the flip side of the reacceleration of money velocity, to some extent. As I’ve said for a long time, unless money velocity is permanently impaired, the rise in money during the year or two after COVID ensures that the price level will converge to a much higher level.

It is increasingly clear that velocity is not permanently impaired.

Disclosure: My company and/or funds and accounts we manage have positions in inflation-indexed bonds and various commodity and financial futures products and ETFs, that may be mentioned from time to time in this column.