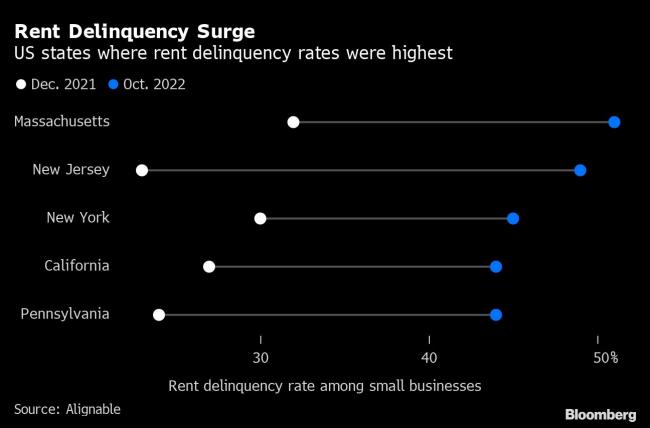 About 37% of small businesses, which between them employ almost half of all Americans working in the private sector, were unable to pay their rent in full in October. That’s according to a survey from Boston-based Alignable, a network of 7 million small business members. It’s up seven percentage points from last month and is now at the highest pace this year, the survey showed.

Chuck Casto, head of research, at Alignable, said that small business owners are resilient but incomes are “basically being eaten away by inflationary pressures.”

The survey of 4,789 small business owners was conducted between Oct. 15 and Oct. 27. The findings partly reflect how inflation is affecting small businesses. More than half say their rent is at least 10% higher than it was six months ago, and in seven say rents have increased at least 20%.

About 49% of restaurants were unable to pay their rent this month, up from 36% in September, while 37% of real estate agents couldn’t pay their rent, up from 27% last month, reflecting the fallout from a slowdown in home sales as higher mortgage rates chill the housing market.

Alignable found that one-third of firms are at risk of closing if revenue does not “ramp up” in the coming months.

Mexican president says economy should grow at least 3.5% through 2024