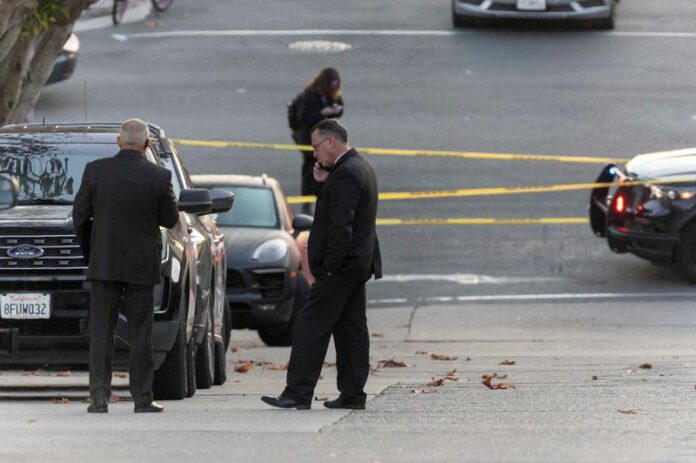 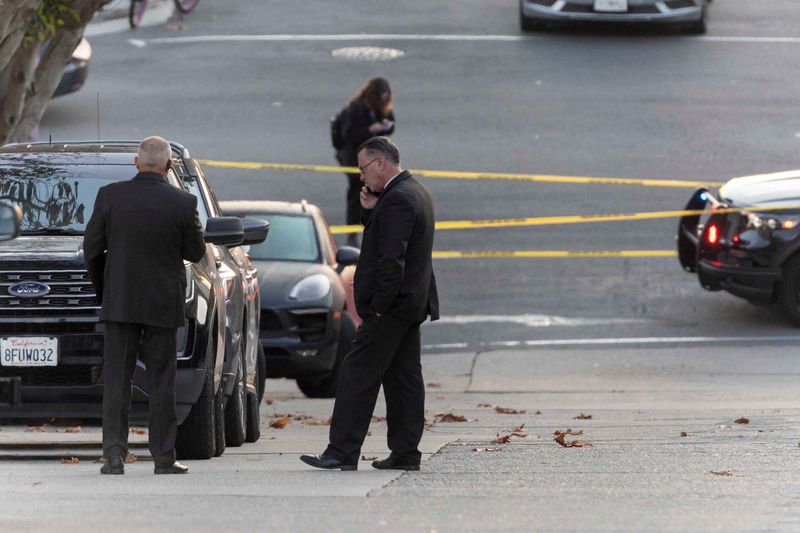 © Reuters. People stand near police tape outside the home of U.S. House Speaker Nancy Pelosi where her husband Paul Pelosi was violently assaulted after a break-in at their house, according to a statement from her office, in San Francisco, California, U.S., October

By Paresh Dave and Steve Gorman

SAN FRANCISCO (Reuters) -The man accused of bludgeoning U.S. House Speaker Nancy Pelosi’s husband with a hammer after breaking into the couple’s home threatened to take her hostage and break her kneecaps if she lied under his questioning, according to a federal criminal complaint filed on Monday.

The 82-year-old speaker of the U.S. House of Representatives, a Democrat who is second in the line of succession to the U.S. presidency, was in Washington at the time of the assault. Her husband, Paul Pelosi, 82, a real estate and venture capital executive, has undergone surgery for skull fractures and injuries to his hands and right arm, and he remained hospitalized on Monday.

“Paul is making steady progress on what will be a long recovery process,” the speaker said in a statement on Monday.

The attack, which Jenkins called “politically motivated,” has stoked fears about partisan extremist violence just over a week ahead of the midterm elections, on Nov. 8, that will decide control of Congress during one of the most vitriolic and polarized U.S. campaigns in decades. Democrats’ continued control of both the House and the Senate is at stake.

As one of the highest-ranking Democrats in Washington and a longtime representative of one of America’s most liberal cities, Nancy Pelosi has been a frequent lightning rod for expressions of conservative criticism and contempt.

Her office was ransacked during the Jan. 6, 2021, attack on the U.S. Capitol by a mob of supporters of Republican President Donald Trump, some of whom hunted for her during the melee, following a fiery speech by Trump featuring false claims that his defeat in the 2020 presidential election was the result of fraud.

DePape was arrested by police officers dispatched to the Pelosis’ home after Paul Pelosi placed an emergency-911 call reporting an intruder, according to an FBI affidavit filed as part of the federal criminal complaint.

The San Francisco Police Department recovered zip ties in the bedroom and in the hallway near the front door. Police also found a roll of tape, rope, a second hammer, a pair of gloves and a journal in DePape’s backpack, the affidavit said. The intruder had broken in through a glass door to the residence.

Paul Pelosi, who was initially left unconscious from the attack, later told police that he was asleep when a stranger, armed with a hammer, crept into his second-floor bedroom and awakened him, demanding to speak with his spouse, the complaint states.

According to Paul Pelosi’s account in the affidavit, he told the intruder that his wife would be away for several days and the intruder responded that he would stay and wait for her. Pelosi’s husband recounted that he managed to slip away to the bathroom to place the 911 call, the affidavit said.

The suspect told police in an interview following his arrest that he planned to hold Nancy Pelosi hostage for questioning, and that if she told the “truth” he would let her go but if she “lied” he would break her kneecaps, according to the FBI affidavit.

He told police he did not flee the Pelosi home after Paul Pelosi’s 911 call because, according to the affidavit, “much like the American founding fathers with the British, he was fighting against tyranny without the option to surrender.”

Authorities said police officers arriving at the Pelosi home saw DePape and Pelosi struggling over a hammer. As the officers shouted at both men to drop the tool, DePape yanked the hammer away and struck Pelosi in the head before officers subdued DePape and took him into custody.

The federal charges carry a combined maximum sentence of 50 years in prison, the Justice Department said in a statement announcing the charges. The state charges are punishable by a prison sentence of 13 years to life, Jenkins said.

Older online messages promoted quartz crystals and hemp bracelets. Reuters could not confirm the posts were created by the suspect charged on Monday.

Experts on extremist ideology have said Friday’s attack appeared to be an example of a growing trend they call “stochastic terrorism,” in which sometimes-unstable individuals are inspired to violence by hate speech and scenarios they see online and hear echoed by public figures.