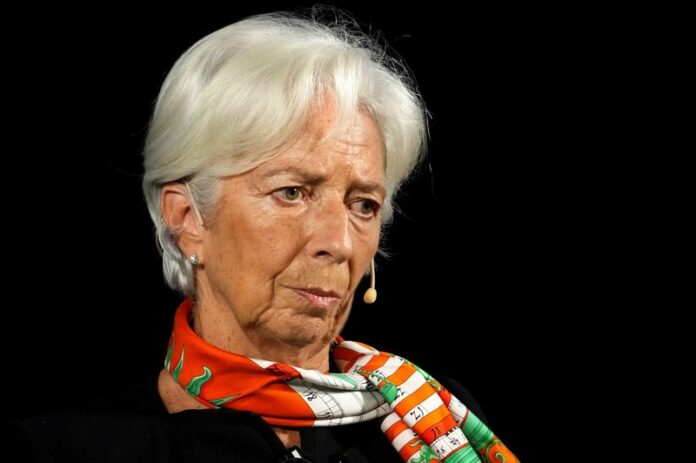 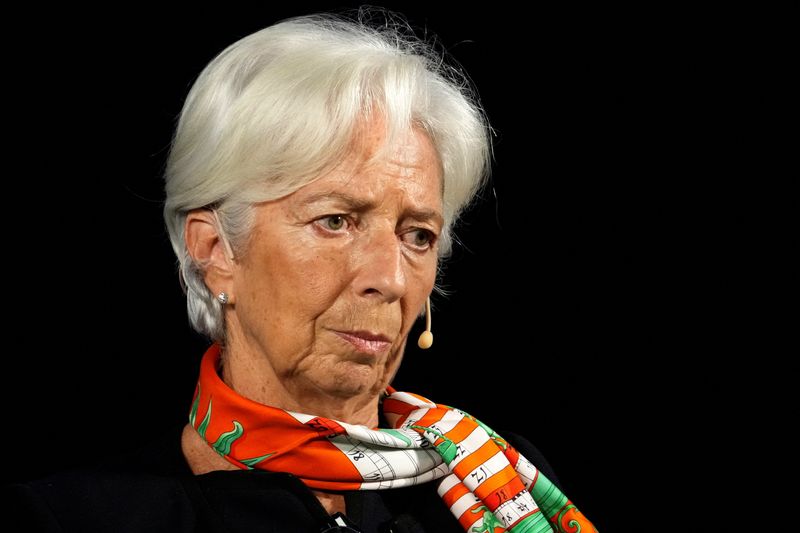 FRANKFURT (Reuters) -The European Central Bank must pay attention to the U.S. Federal Reserve, which influences global markets, but it cannot just mirror its policy moves, ECB President Christine Lagarde said on Thursday after the Fed guided for even higher interest rates.

The Fed raised its main interest rate by another 75 basis points on Wednesday and chair Jerome Powell said the battle against inflation would require borrowing costs to rise “higher than previously expected”, leading investors to price in more ECB hikes too.

But Lagarde said the ECB, which itself raised rates by 75 basis points last week, could not simply mimic the Fed because economic conditions were different in the 19-country euro zone – a point also underscored by ECB board member Fabio Panetta and Bank of Italy governor Ignazio Visco.

“We have to be attentive to potential spillovers,” Lagarde told a conference in Riga. “We are not alike and we cannot progress either at the same pace (or) under the same diagnosis of our economies.”

Lagarde conceded the ECB was “influenced by the consequences” of Fed action through financial markets and especially the euro’s exchange rate, which was falling against the U.S. dollar on Thursday.

“Clearly the exchange rate matters and has to be taken into account in our inflation projections,” Lagarde said, repeating her commitment to bring inflation down to the ECB’s 2% target.

In his own speech, Panetta said the euro zone was more vulnerable than the United States to a global economic slowdown and higher energy prices, and that the Fed’s tightening was already taking its toll, meaning the ECB needed to be cautious.

Specifically, he argued that the ECB should avoid raising interest rates too fast because that could excessively hurt economic growth, home prices and the financial markets.

“If these bigger-than-expected increases are interpreted as signalling a higher terminal rate, rather than simply frontloading the normalisation, we could have a stronger impact on financing conditions – and ultimately on economic activity – than intended,” Panetta told an ECB event.

Bank of Italy governor Visco also said on Thursday the ECB should not be expected to react in the same way as the Fed and backed market expectations for lower rates in the euro zone than in the United States.

His Portuguese peer Mario Centeno went even further by saying the ECB had already completed a large part of the rate hikes it sees as needed after 200 basis points worth of increases since July, which have left the deposit rate at 1.5%.

But several other members of the ECB’s policy-making Governing Council continue to take a more aggressive view.

Speaking alongside Lagarde, Latvian central bank governor Martins Kazaks said rates needed to rise “much higher” and there was no need to pause the hikes at the turn of the year.

Borrowing costs for euro zone companies and consumers have started to rise from record-low levels.

The interest rate that banks demand from companies rose by 55 basis points in September, the biggest monthly increase since the euro was created, to stand at 2.41%, ECB data showed on Thursday. This was the highest since 2015.