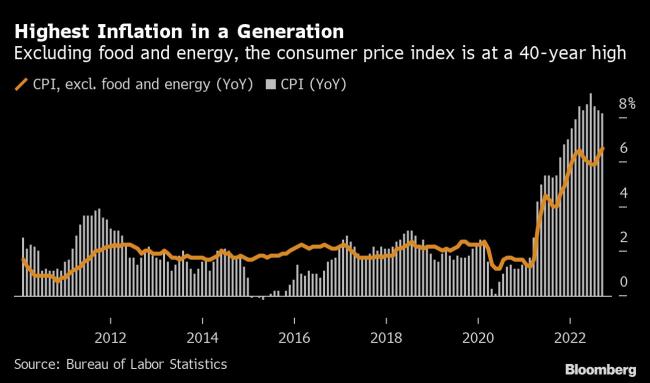 These Five Factors Will Decide If Democrats Lose Control of Congress

(Bloomberg) — Just one week before midterm elections that will determine control of both the House and Senate, Republicans look poised to come away with big wins as voters focus on stubborn inflation and recession fears. President Joe Biden’s chronically low approval rating means he is not able to make a compelling case for Democrats. Here are the key things to watch for in the run-up to the vote:

The highest inflation in a generation and talk of a looming recession are stoking voters’ economic fears just as they head out to the voting booth. Democrats have been laser focused on abortion rights after the Supreme Court rolled them back in the summer, but the issue’s salience has faded in light of still-high gasoline and food prices. A plan to cancel thousands of dollars in college debt, a sop to young voters, has proven divisive and given Republicans an opportunity to attack it as potentially inflationary. Republicans have relentlessly hammered home the message on the grim economic outlook and as a result it’s looking like Democrats will lose control of both the House and Senate.

In the race for Senate from this battleground state, voters are choosing between the current Lieutenant Governor John Fetterman, who was impaired by a stroke in May, and TV doctor Mehmet Oz, who recently moved to Pennsylvania from neighboring New Jersey.  The two are locked in a close race, with polls showing what is essentially a tie. Fetterman spent the summer pounding Oz on social media and looked likely to win, but a poor showing in their only debate weakened his standing. Oz clawed back with ads on crime in Democrat-led cities that resonate with suburban voters.

Will local elections officials be the disrupters?

The chaos after the 2020 election highlighted the fact that instead of one big election, the US holds thousands of elections around the country, run by local officials.  That is by design, but in 2022 that degree of control  could lead to more disputed outcomes. Some of those local officials believe, without evidence, that the 2020 was fraudulent. Now it remains to be seen how they will react if the new election doesn’t go their way.

Control of the Senate may not be known on election night or even in November. If neither candidate in the Georgia Senate race gets 50% of the vote there will be a runoff a month later and right now, the two candidates are essentially tied and both under that necessary floor.  Incumbent Senator Raphael Warnock is not being helped by the Democrats’ tone-deaf messaging on the economy. In the once-reliably Republican state. former football star Herschel Walker managed to shake off scandal and questions about his fitness with a strong debate performance. Democrats dismissed the Donald Trump-endorsed challenger as weak but he’s proven more resilient than they imagined.

Will extremism and threats move voters?

The shadow of  the former president, who personally hand-picked a number of candidates in key swing states, looms large. He’s teased a second presidential run in 2024 and has an iron grip on the party. Many polls show “defending democracy” as a key issues for voters, but largely among those who already identify as Democrats. The Jan. 6, 2021, hearings on whether he instigated a mob attack on the Capitol have left voters largely indifferent. And instead of inspiring unity, the recent violent attack on Speaker Nancy Pelosi’s husband has pushed the two sides back into their corners. Another factor is Elon Musk’s takeover of Twitter and promise to “Free Speech” will lead to a spike in hateful rhetoric.