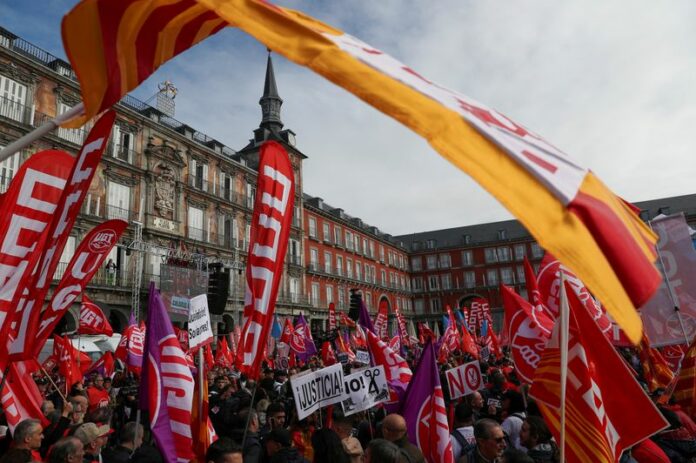 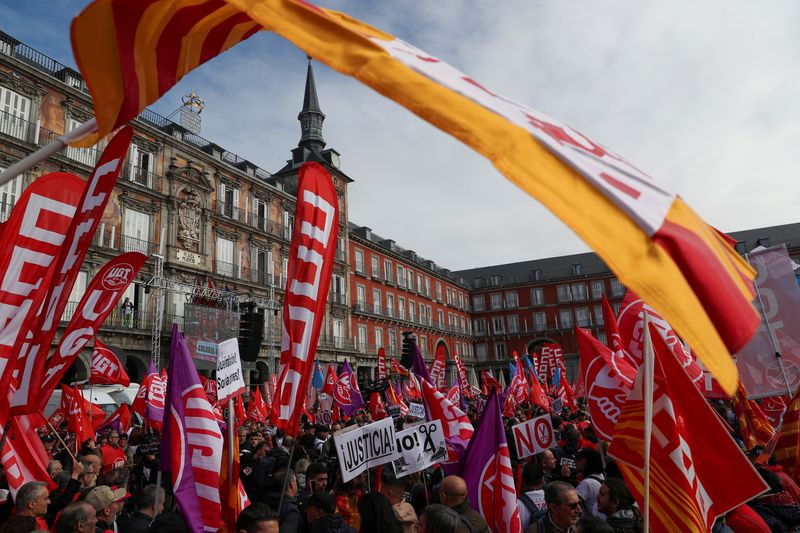 MADRID (Reuters) – Thousands of Spaniards packed Madrid’s landmark Plaza Mayor square on Thursday to demand higher pay in the first mass protest since the start of the cost of living crisis.

“There is no dignity without wage hikes,” protesters chanted. Some waved placards that read: “Salary hikes or social strife!”

Inflation in Spain slowed to 7.3% in the year to October from readings of over 10% in the summer months but remains well above normal levels. Euro zone consumer prices climbed at a record pace of 10.7% last month.

The surging inflation, combined with an economic slowdown, is mainly the result of Russia’s invasion of Ukraine and the subsequent disruption of gas deliveries to Europe.

“When consumer prices jump 10% and salaries rise by 1% it means workers are losing purchasing power fast. We are getting poorer every day, and the worst part is that there is a minority getting richer at our expense,” said Tomas Perez, 52, a nurse and member of the UGT union.

Unai Sordo, secretary general of Spain’s largest union CCOO, told broadcaster SER that the demands to employers were only reasonable. Unions want an increase of 4%-4.5% this year and 2.5%-3% in the following two years, he said.

“We know that wages will probably not be able to grow exactly in line with inflation,” he said.

“We are not saying that wages cannot go up. What we can’t do is agree to wages going up in line with inflation just like that. We can talk about productivity and profits. There are formulas,” he told RNE radio.

Chart of the Day: Discretionary Stocks to Be Clobbered Along with U.S. Economy