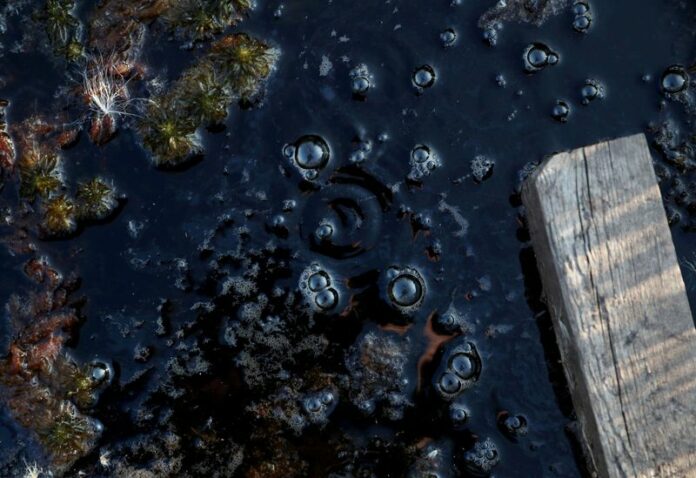 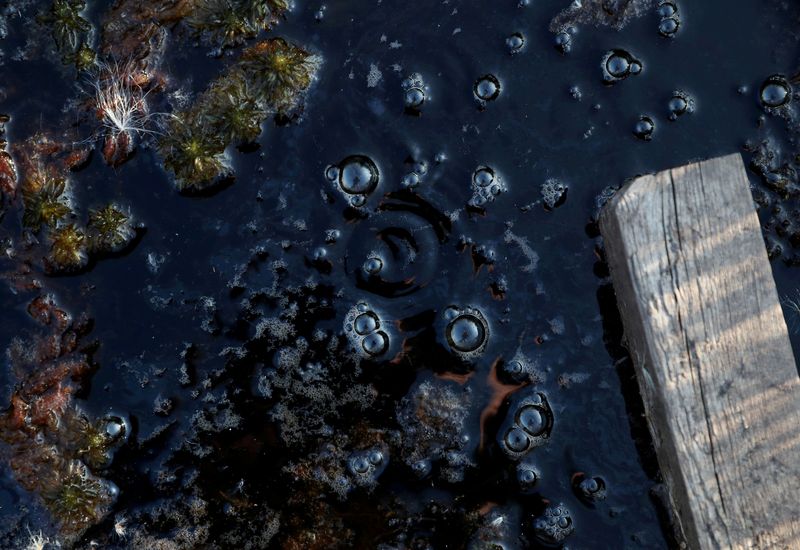 © Reuters. FILE PHOTO: Methane bubbles are seen in an area of marshland at a research post at Stordalen Mire near Abisko, Sweden, August 1, 2019.REUTERS/Hannah McKay/

WASHINGTON (Reuters) – Some forty of the 119 countries that pledged last year to slash emissions of the powerful greenhouse gas methane will unveil their plans to do so at the UN climate summit next week, according to a senior U.S. official.

The outlook reflects modest progress on the U.S. and EU-led Global Methane Pledge, an international side deal to the UN climate talks in which countries promised to reduce methane emissions 30% by 2030 from 2020 levels in a bid to tackle on of the top contributors to near-term planetary warming.

The United States, Canada and Vietnam are among the countries that will put forward details, according to the official in U.S. President Joe Biden’s administration, who asked not to be named.

Aside from the United States, it was unclear if any of the world’s other top 10 methane emitters would present plans at the summit, which takes place in Egypt from Nov. 6-18.

The world’s top two largest methane emitters, China and India, are not signatories to the pledge, and other big emitters like Brazil are not expected to have plans in time for the talks.

The plans will outline the countries’ regulations, standards and investments in methane reduction and how those strategies fit into their broader climate targets under the 2015 Paris climate agreement to limit global warming to 1.5 degrees Celsius above pre-industrial levels, the U.S. official said.

The United States, for example, is expected to tout its 2021 regulatory proposal to require oil and gas drillers to find and fix methane leaks, and release new details on how it aims to tackle emissions from small oil wells and from flaring.

To date, only 15 countries have published specific targets or detailed national strategies for slashing their methane emissions since signing on to the Global Methane Pledge at the 2021 UN climate summit in Glasgow. Those countries will be among the 40 expected to lay out details at the conference, the official said.

Scientists say sharp cuts in methane emissions from oil and gas extraction to farming and waste management will be a vital lever in tackling climate change, since methane is over 80 times more potent than carbon dioxide in the short-term.

The World Meteorological Organization said last month that last year’s jump in methane concentrations was the highest since records began in 1983 and came on the heels of another record-breaking year in 2020.

Meanwhile, the world saw at least two massive releases of methane from oil and gas infrastructure since last December, including from ruptures on the Nord Stream natural gas pipeline system under the Baltic Sea and a major leak from offshore oil and gas fields in Mexican waters of the Gulf of Mexico.

All eyes will be on the world’s biggest methane emitter, China, which had agreed in ajoint declaration with the United States last year to develop a comprehensive national plan to control and reduce emissions, even though it was not party to the Global Methane Pledge.

Official documents and local government climate action plans now include the set phrase “strengthen the statistical monitoring and emissions control of methane and other non-CO2 greenhouse gases” and China’s big energy firms are involved in pilot programs to improve monitoring.

“The national methane plan is indeed key to watch. But the Chinese authorities are quite cryptic in terms of whether and when it will be released in the run up to [the COP],” said Li Shuo, a China expert at Greenpeace.

Climate experts are also concerned that rising tensions between Washington and Beijing over Taiwan and Russia’s invasion of Ukraine could undermine joint cooperation on climate change.

Meanwhile, three new countries – Australia, Mongolia and Bangladesh – announced last month that they have joined the Global Methane Pledge, each of which may offer more detail about their plans in Egypt.

Mexico may also outline more details about its methane strategy. State oil firm Pemex recently presented a plan to reduce methane from the oil and gas sector to the government.

Jonathan Banks, global director of methane at the Clean Air Task Force, which is closely tracking country pledges, said the details emerging from countries are a crucial step to dealing with global warming.

“We need to move out of the promises and more towards the action pieces, whether it’s sectoral actions or larger actions,” he said.

Countries are also expected to call for more international funding at the conference to help them tackle methane emissions, the U.S. official and Banks said. Less than 2% of today’s climate mitigation investment tackles methane, even though it is a huge driver of climate change, the official said.