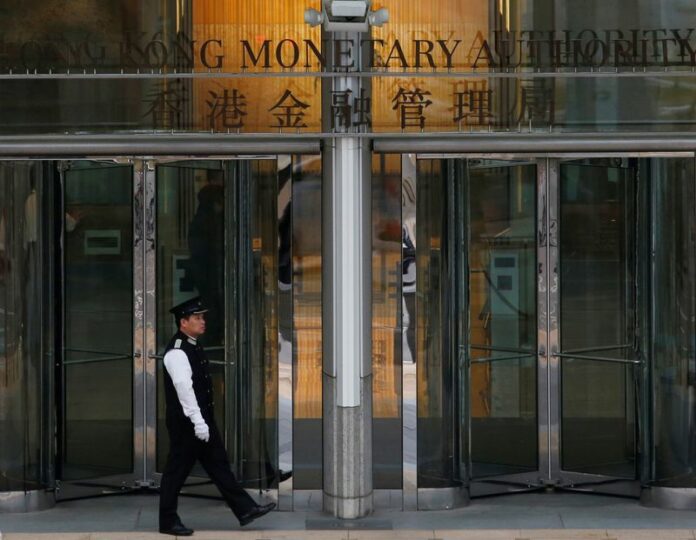 By Donny Kwok and Clare Jim

HONG KONG (Reuters) -The Hong Kong Monetary Authority (HKMA) on Thursday raised its base rate charged via the overnight discount window by 75 basis points to 4.25%, and said households should brace for a period of higher commercial rates and carefully manage financial risks.

The HKMA’s move prompted the city’s largest commercial bank HSBC, to also increase its best lending rate by 25 bps to 5.375% effective Nov. 4. It follows the bank’s 12.5-bps hike in September, the first increase in four years.

Analysts expect other banks will follow suit after HKMA’s decision came hours after the U.S. Federal Reserve delivered a rate hike of the same margin. Hong Kong’s monetary policy moves in lock-step with the United States’ as the city’s currency is pegged to the greenback in a tight range of 7.75-7.85 per dollar.

HKMA said U.S. rate hikes will not affect the financial and monetary stability of Hong Kong, and the city’s financial and money markets will continue to operate in a smooth and orderly manner, while the Linked Exchange Rate System continues to work well.

“The public should be prepared for the commercial interest rates to rise further, and carefully assess and manage the relevant risks when making property purchase, mortgage or other borrowing decisions,” Eddie Yue, chief executive of HKMA, said on Thursday.

The Federal Reserve raised interest rates by three-quarters of a percentage point again on Wednesday and said its battle against inflation will require borrowing costs to rise further.

It signalled, however, it may be nearing an inflection point in what has become the swiftest tightening of U.S. monetary policy in 40 years.

Hong Kong’s financial secretary Paul Chan said there is still a high chance for the Fed to continue to raise interest rates, which along with depressed external demand have affected the city’s exports.

However, there was no need to overly worry about the impact on the city’s property and financial markets, he said.

“The economic situation has been challenging but if we’re able to put COVID-19 under control, if we’re able to continue to have travellings between Hong Kong and the rest of the world, that would provide added impetus to our economic growth,” Chan told reporters at the sideline of a summit.