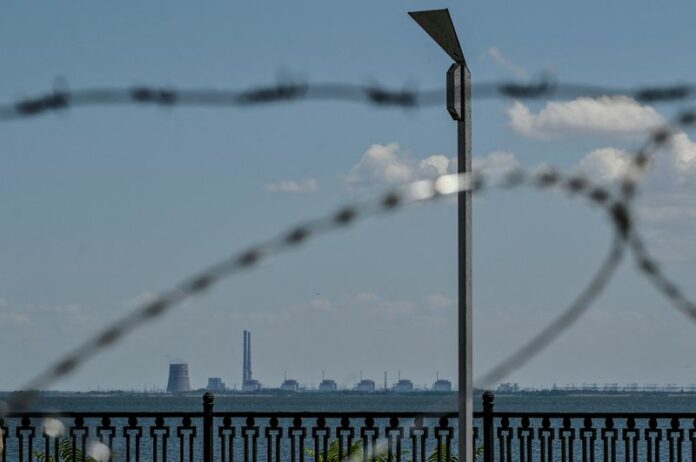 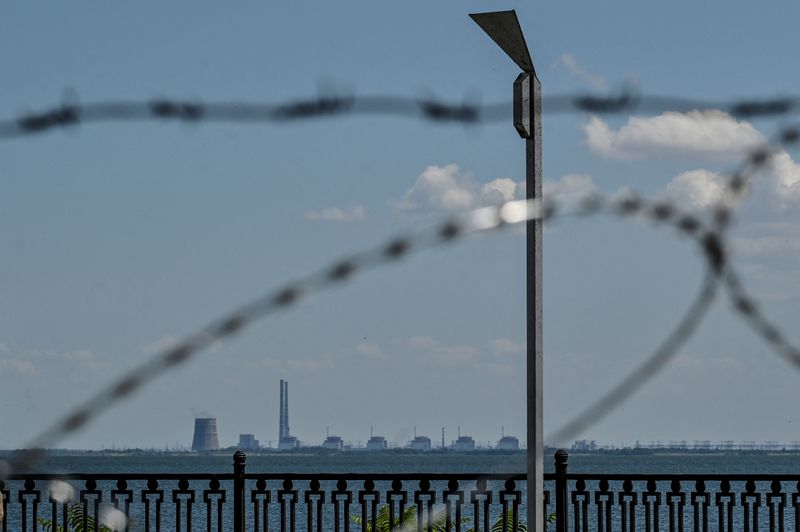 © Reuters. Zaporizhzhia Nuclear Power Plant is seen from an embankment of the Dnipro river in the town of Nikopol, as Russia’s attack on Ukraine continues, in Dnipropetrovsk region, Ukraine July 20, 2022. REUTERS/Dmytro Smolienko

By Pavel Polityuk and Tom Balmforth

KYIV (Reuters) -A Russian-installed official in southern Ukraine said Moscow will likely pull its troops from the west bank of the Dnipro River in Kherson and urged civilians to leave, possibly signalling a retreat that would be a setback to Russia’s war.

There was silence from senior officials in Moscow. The Kyiv government and Western military analysts remained cautious, suggesting Russia could be setting a trap for advancing Ukrainian troops.

“Most likely our units, our soldiers, will leave for the left (eastern) bank,” Kirill Stremousov, the Russian-installed deputy civilian administrator of the Kherson region, said in an interview on Thursday with Solovyov Live, a pro-Kremlin online media outlet.

The area includes Kherson city, capital of the region of the same name, and the only major city Russia has captured intact since its invasion in February. It also includes one side of a dam across the Dnipro which controls the water supply to irrigate Crimea, the peninsula Russia has occupied since 2014.

Previously, Russia had denied its forces were planning to withdraw from the area.

In lengthy comments on Thursday night on a programme organised by RT television, Stremousov was somewhat more equivocal, saying “we have to take some very difficult decisions now. Whatever our strategy might be. And some people might be afraid to recognise things.

“But for me it is very important to try to say at the moment – People, please go over to the east bank. You will be in a far safer position,” Stremousov said.

At another point, Stremousov said he hoped “that we will not leave Kherson” and if that were to happen, “it will be a big blow not only in terms of the image of us all, but a big blow for people who could stay here.”

Speculation swirled over whether Russia was indeed pulling out, after photos circulated on the internet showing the main administrative building in Kherson city with Russia’s flag no longer flying atop it. Ukraine said those images could be Russian disinformation.

Natalia Humeniuk, spokesperson for Ukraine’s southern military command, said it could be a Russian trap.

“This could be a manifestation of a particular provocation, in order to create the impression that the settlements are abandoned, that it is safe to enter them, while they are preparing for street battles,” she said in televised comments.

Over the past 24 hours, Russian forces have launched three missile and 16 air strikes on Ukrainian targets as well as more than 40 shelling episodes, the Ukrainian military said in a statement on Thursday night.

On the southern front, Russian fire hit more than 35 towns and there were more than 30 reconnaissance missions by drones, the statement said.

Reuters was not able to verify battlefield reports.

A Ukrainian foreign ministry statement accused the Russian authorities of carrying out “mass forced movement of residents” in Kherson and Zaporzhzhia provinces in the south and Luhansk and Donetsk regions in the east “to the territory of temporarily occupied Crimea or to the Russian Federation.”

Its attacks in the past few weeks on Ukrainian energy and water supplies have hit civilians hard as winter approaches, the Kyiv government says. As of Thursday night, 4.5 million Ukrainians in the capital Kyiv and 10 other regions were temporarily without power, the latest outages caused by Russian attacks, President Volodymyr Zelenskiy said in a video address.

Temperatures can fall far below freezing in winter, now just weeks away.

U.S. Defence Secretary Lloyd Austin said he believed Ukrainian forces could retake Kherson, in perhaps his most optimistic comments on the counter-offensive to date.

A Western official, speaking on condition of anonymity, said some Russian military commanders had rebased across the river to the east.

“We would assess that in Kherson, it’s likely that most echelons of command have withdrawn now across the river to the east, leaving pretty demoralized and often in some cases leaderless troops to face off Ukrainians on the other side,” the official said.

Russia has fought for months to hang on to the pocket of land it holds on the west bank at the mouth of the Dnipro River that bisects Ukraine.

Ukraine has attacked the main river crossings for months, making it difficult for Russia to supply its force on the west bank. Ukrainian troops have been advancing along the river since the start of October, although their advance had slowed in recent days.

Ukrainian troops on the front line last week, visited by Reuters, said they saw no evidence Russian forces were withdrawing and believed they were in fact reinforcing.

Michael Kofman, a U.S. expert on the Russian military who has just returned from the Ukrainian side of the Kherson front, said Moscow’s intentions were unclear.

“The situation in Kherson is clear as mud,” tweeted Kofman, director of Russia studies at the Center for Naval Analyses.