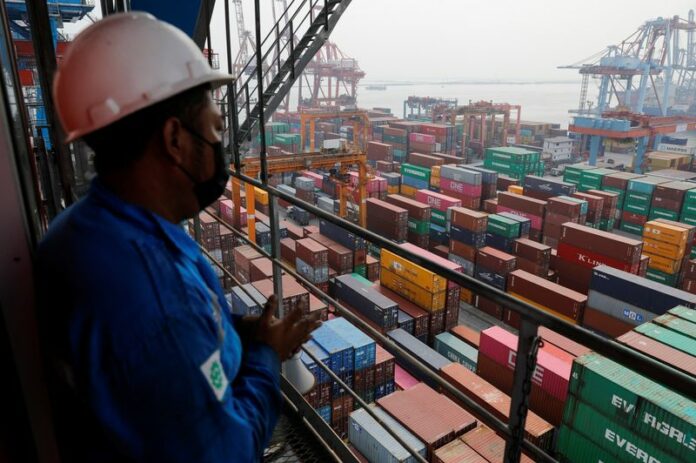 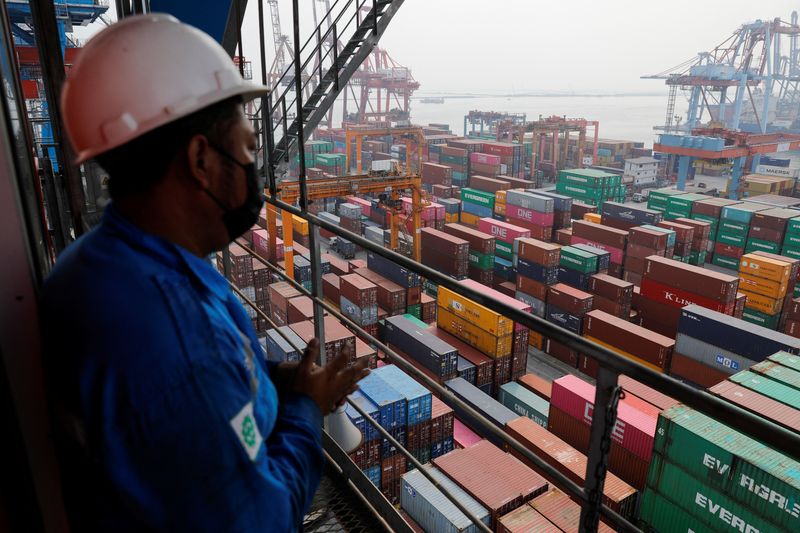 © Reuters. A technician stands on a crane at the Tanjung Priok port in Jakarta, Indonesia, August 3, 2022. REUTERS/Willy Kurniawan

BENGALURU (Reuters) – Indonesia’s economy grew at its fastest pace in over a year last quarter, buoyed by strong exports and consumption, but a slowdown in China and a widely expected global recession pose significant risks, a Reuters poll found.

Southeast Asia’s largest economy has been enjoying an export boom for more than a year due to rising commodity prices. The resource-rich country has reported a $39.9 billion surplus for the first nine months of this year, just ahead of its full-year record surplus of $39.7 billion in 2006.

That has helped the country weather the U.S. Federal Reserve interest rate tightening cycle better than most of its peers.

The country reported annual economic growth of 5.44% in the second quarter, the strongest reading in a year, and is expected to have grown 5.89% last quarter compared with the same period a year ago, the median forecast of 18 economists in the poll showed. Estimates ranged from 5.23% to 7.50%.

The data is due to be released on Nov. 7.

“We expect growth to pick up owing to a low statistical base from Q3 2021 and the continued release of pent-up domestic demand driven by the economic reopening,” noted Shivaan Tandon, emerging Asia economist at Capital Economics.

“Exports are also likely to have supported growth in Q3 although we think external demand will turn into a headwind over the coming quarters.”

However, on a quarter-on-quarter basis, growth was expected to have slowed to 1.62% from 3.72% in the second quarter. That was based on a smaller sample of forecasts.

A separate Reuters poll found GDP was likely to grow 5.2% this year, in line with Bank Indonesia’s forecast, and then moderate slightly to 5.0% in 2023.

While rising commodity prices have served as a backstop, a significant slowdown in China – Indonesia’s biggest trade partner – would pose a significant threat to the export-led economy.

That along with Bank Indonesia’s rate-hiking campaign, which has picked up pace in the last few months to tame inflation and prop up the rupiah, was likely to crimp domestic demand.

Bank Indonesia has hiked rates by a total of 125 basis points since August.