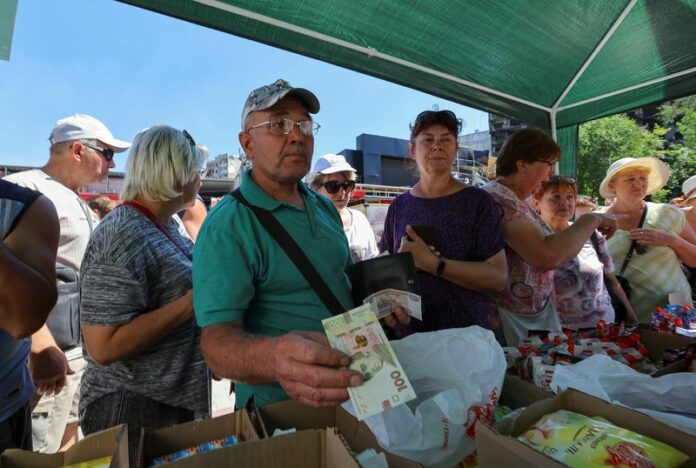 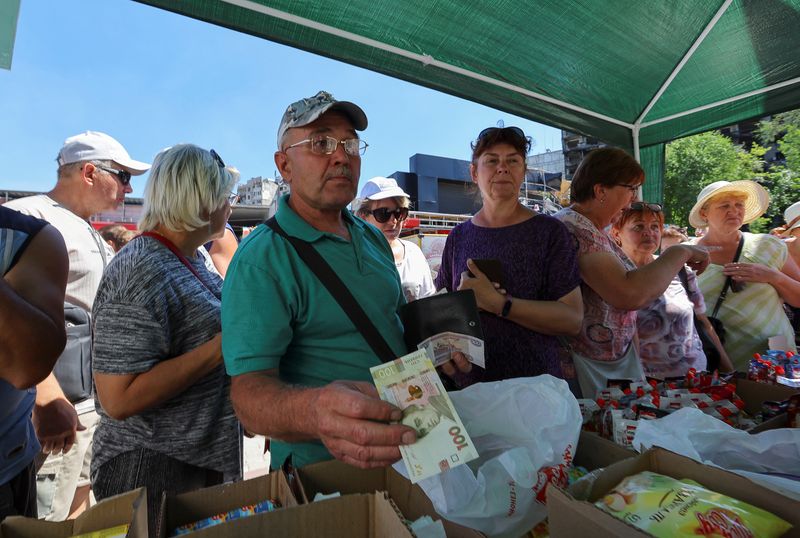 © Reuters. FILE PHOTO: A customer holds banknotes of the Ukrainian hryvnia and the Russian rouble at a street market during Ukraine-Russia conflict in the southern port city of Mariupol, Ukraine July 15, 2022. REUTERS/Alexander Ermochenko

MOSCOW (Reuters) -Russia’s economy and banking sector have withstood the challenge of “powerful” Western sanctions but the central bank has no plans yet to ease capital controls that have helped support the rouble, Governor Elvira Nabiullina said on Tuesday.

In one of the strongest comments to date about the sanctions by a Russian official, Nabiullina told lawmakers: “Sanctions are very powerful and their influence on the Russian and global economy should not be downplayed.

“Isolating from their influence is not possible,” she added.

Western countries imposed sanctions intended to cut Russia off economically after Moscow sent troops into Ukraine in February in what it calls a “special military operation”.

Russian authorities managed to stabilise the situation relatively quickly, and Nabiullina said that the economy and the banking sector – a particular target of the sanctions – had generally stood up well to the challenge.

Corporate and retail lending expanded by 9.9% and 6.7% respectively in January-October, she said.

“We expect the positive dynamics in lending to continue and, at the same time, banks will be able to fulfil the new loan holiday programme both for the mobilised and members of their families,” added Nabiullina, who was reappointed as central bank chief in March and has herself been sanctioned.

Those called up to serve in the army as part of President Vladimir Putin’s “partial mobilisation” are entitled to grace periods on mortgages, consumer and credit card loans for the duration of their service and for 30 days afterwards.

The mobilisation is already putting pressure on Russia’s finances, consumer demand and businesses.

Nabiullina said the central bank sees no need for now to ease capital controls – including curbs on foreign currency withdrawals – that have helped make the rouble the world’s best-performing currency this year.

The restrictions have eaten into Russia’s export income by denting the value of dollar and euro proceeds from sales of commodities and other goods abroad.

Russian officials have pushed banks to drastically reduce their exposure to the U.S. dollar and euro after the banking sector posted heavy losses in the first six months of the year.

Analysts have warned that state revenues could be much smaller than officially forecast as western nations reduce imports of Russian gas and oil, and have pointed to the risk of a wider-than-expected budget deficit.

Shunned by the West, Russia is seeking to develop other trading routes, although potential partners are wary of secondary sanctions, Nabiullina said.

“Digital currencies, which we and many of our major partners are developing themselves, can become one of the factors in dealing with this bottleneck,” she told lawmakers.