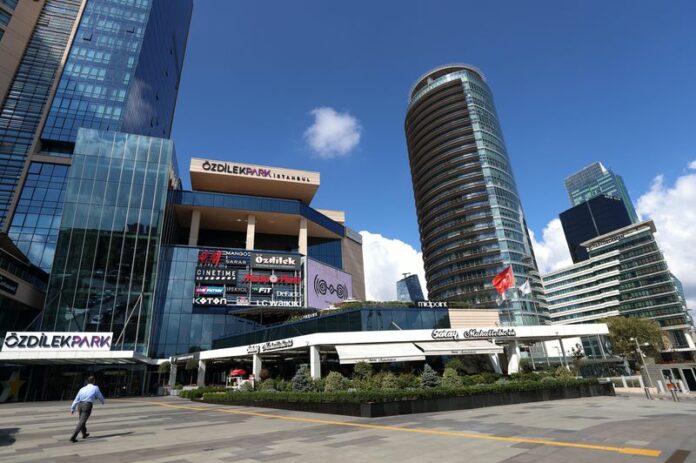 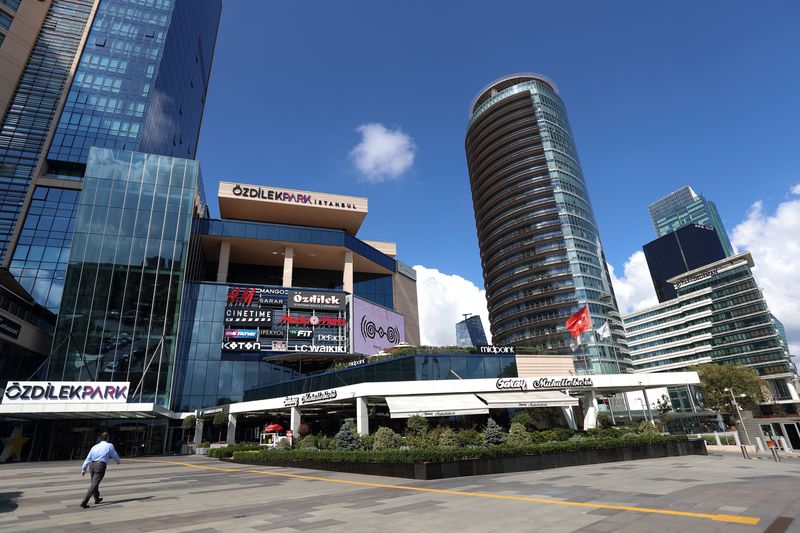 © Reuters. FILE PHOTO: A man walks towards the entrance of OzdilekPark Shopping Center in the business and financial district of Levent, which comprises of leading Turkish banks’ and companies’ headquarters, as the outbreak of the coronavirus disease (COVID-19) cont

Bank executives have become so concerned at government policy that some have launched a rare revolt in recent weeks.

Yet despite soaring inflation, bankers say President Tayyip Erdogan’s government is likely to continue its unorthodox policies of monetary and fiscal stimulus at least through mid-2023 elections, which polls show he risks losing.

Bankers forecast a very tough 2023 and beyond for earnings and lending, several of them told Reuters.

To keep the central bank’s aggressive interest rate cuts on track over the last year, the lenders have had to absorb a series of new rules meant to discourage hard currency deposits and to redirect credit to government-preferred sectors.

Hakan Aran, CEO of the largest private lender Isbank, urged authorities to ease or lift measures, including a mandate to hold government bonds, on grounds they prevented banks from using resources effectively.

While it is difficult to predict how much earnings are set to drop, bankers say the new requirements to hold more treasury debt with yields fixed well below both lending rates and inflation will have an impact.

Such public criticism from Aran and other CEOs is rare from a sector adept at flexibly and stoically dealing with abrupt rule changes, and at avoiding politics.

One senior banker who requested anonymity said executives finally spoke out because the raft of new rules “raised the heat in the banking sector so much that it started to burn the system”.

Despite the bankers’ calls, Ankara is unlikely to reverse course, including on a scheme that has ballooned in value in which the state protects lira deposits from depreciation.

“No one wants to create a foreign exchange demand of $70 billion before the elections,” the banker said.

Authorities say they will stay the course.

On Oct. 31, the day Isbank’s chief spoke out, the central bank sent a letter telling lenders to make maximum effort abiding by regulations and warned against forex transactions during off hours.

The central bank and bank regulator BDDK declined to comment on fallout for bank profits and lending next year.

Erdogan adopted the economic programme last year in which rate cuts and targeted lending to exporters and smaller businesses are intended to boost economic growth, investment and to reverse chronic current account deficits.

He says cutting rates lowers inflation, despite his programme having largely sent inflation to 85%. It also set off a historic currency crisis late last year that prompted many of the regulations now pressing banks to boost lira holdings.

These purchases were made at a premium, sometimes replaced inflation-indexed bonds, and drove treasury yields down well below inflation to 10%, leaving lenders exposed to losses.

The treasury-purchase rule “completely changed the industry’s view. Banks became unable to price their risks… hamstringing their most fundamental right and capability,” said Arda Tunca, an economist and columnist at PolitikYol.

Net profits for Turkish banks jumped by more than 400% to 286.2 billion lira ($15.38 billion) in the first nine months of 2022, thanks largely to their CPI-linked bond holdings.

But the regulations are set to bite in next year’s results, especially for private lenders. Their share of outstanding loans has fallen to 29%, compared to 46% for state lenders that have increased their dominance in recent years.

Adding to costs, some banks are offering deposit rates of nearly 30% to corporate clients, even as they lend at near 17%.

Other bankers said the regulations and rising costs have interfered with basic credit extension and could lead banks to cut operational costs. They could even strain relationships with foreign companies, raising funding costs of syndications or letters of credit, two of the insiders told Reuters.

Authorities “tied the fate of the banking sector to state lenders with the recent regulations. This creates a balance sheet risk,” said another banker who requested anonymity.

Still, other sources close to the state lenders said these concerns are exaggerated given exporters, the focus of Erdogan’s programme, are easily getting credit.

“It will take time to get used to this change,” one of them said.

Yet the banks, now flush with fixed-rate bonds, are also vulnerable to a policy reversal that would test their resiliency. Erdogan’s opponents in the spring 2023 elections say they will hike interest rates to contain inflation.