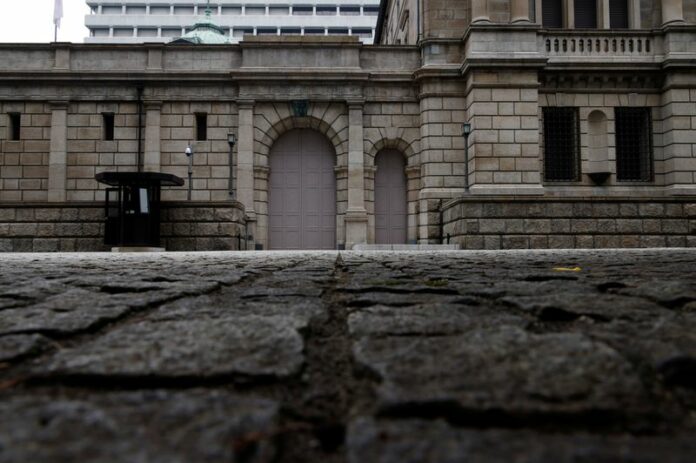 TOKYO (Reuters) -Bank of Japan policymakers last month debated the need to examine the side-effects of prolonged monetary easing and the impact of a future exit from ultra-low interest rates, a summary of opinions showed on Tuesday.

The summary suggests some policymakers are slowly becoming more open to the possibility of an eventual withdrawal of the radical monetary stimulus deployed by Governor Haruhiko Kuroda nearly a decade ago.

Many in the nine-member board stressed the importance of sustaining ultra-loose policy for now to ensure wages rise enough to compensate households for the rising cost of living, according to the summary of the October policy meeting.

But some saw signs the recent cost-driven inflationary pressure was broadening, with one warning that a “big overshoot of inflation cannot be ruled out,” according to the summary.

“It’s important to continue to examine how future exit strategies (from ultra-loose policy) will affect markets, and whether market participants will be well prepared for them,” one member was quoted as saying.

While there is no need to immediately tweak monetary policy, the BOJ must pay attention to the side-effects of prolonged easing, according to another opinion quoted in the summary.

The remarks highlight the emerging divergence between Kuroda’s calls to keep monetary policy ultra-loose, and the opinions of some other board members, who are more open to the idea of debating a future exit from ultra-low interest rates.

Japan’s core consumer inflation rate accelerated to a fresh eight-year high of 3.0% in September, challenging the central bank’s resolve to retain its ultra-easy policy stance as the yen’s slump to 32-year lows pushes up import costs.

Kuroda has ruled out the chance of tweaking the BOJ’s policy targets, set at minus 0.1% for short-term rates and around zero for the 10-year bond yield, on the view inflation will slow back below the BOJ’s 2% target next fiscal year.

Critics, however, point to the rising cost of prolonged easing. The BOJ’s relentless defense of its 10-year yield cap has caused distortions in the shape of the yield curve, which has come under upward pressure from rising global interest rates. It has also inflated the cost of raw material imports by weakening the yen.

Some market players bet the BOJ will tweak its yield curve control policy when Kuroda’s term ends in April next year.

At the Oct. 27-28 meeting, the BOJ kept ultra-low rates and maintained its dovish guidance, cementing its status as an outlier among global central banks tightening monetary policy.

But it raised its price forecasts, and now projects core consumer inflation to hit 1.6% for both fiscal 2023 and 2024 after rising 2.9% in the current year ending in March 2023.