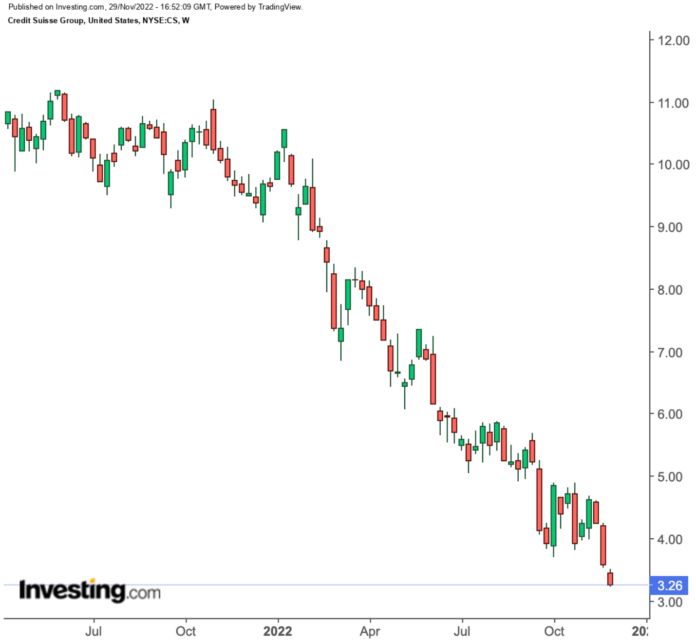 Credit Suisse stock trades at a record low level after plunging 30% during the past 11 days
Investors are dumping CS shares after seeing massive outflows from its flagship wealth management division
If the pace of withdrawals doesn’t slow, it may push the bank’s liquidity below the regulatory requirements

It seems that Switzerland’s second-largest lender, Credit Suisse (NYSE:CS), is in a state of perpetual decline.

The stock slipped as much as 3.4% on Tuesday (as of this writing), hitting a fresh record low and putting it on track for its longest losing streak since 2011. The shares have fallen for 11 straight days, losing as much as 30%. When a lender of Credit Suisse’s size goes through such a downward spiral, it reminds investors of the 2008 Financial Crisis when several banks collapsed, triggering state-backed bailouts to save the global financial system.

Is Credit Suisse heading towards a similar fate? On the face of it, it doesn’t look like the case. Switzerland’s No. 2 bank had about $1.47 trillion in assets under its management. It also had a tier-one capital ratio of 13.5% on Jun 30, far above the international regulatory minimum of 8% and the Swiss requirement of about 10%. Its liquidity coverage ratio is one of the highest among European and U.S. banking peers.

With its sufficient liquidity, Credit Suisse’s rock-bottom share price looks like the deal of the year. But numbers don’t always tell the complete story.

Credit Suisse’s main problem is its sinking reputation, fueled by a vicious circle of mistrust among investors and wealthy clients. The bank has a history of scandals and management upheavals that have damaged its position as one of the largest wealth managers for the world’s rich.

Last week, the bank warned it would lose around $1.6 billion in the fourth quarter after customers began to pull their investments and deposits. Between Sept 30 and Nov 11, outflows were about 6% of its total $1.47 trillion assets, or around $88.3 billion.

Customers in its wealth-management arm—its bread and butter—removed $66.7 billion from the bank. According to its filings, the bank typically attracts at least $30 billion in net new assets in a year and hasn’t posted an annual net outflow since 2008.

Due to this worsening crisis of confidence, InvestingPro’s valuation models are in the red, indicating that investors should avoid investing in CS stock. The future of Credit Suisse, the bank that helped position Switzerland as a linchpin of international finance, mainly relies on the restructuring that its new management team is putting together. The bank last month announced a massive overhaul that included breaking up the investment bank, separating the advisory and capital markets unit, and thousands of job cuts.

To pay for the restructuring, the bank is raising 4 billion Swiss francs ($4.2 billion) through a rights issue and selling shares to investors, including the Saudi National Bank.

With CS in a deep hole, one might argue that its stock is reflecting these risks. CS trades at about 20% of its tangible book value or net worth. In other words, one can buy a share of Credit Suisse for 20 cents on the dollar, and if the bank succeeds in its restructuring plan, there is a potential upside.

But as I pointed out earlier, CS’s reputational risk is too big, and that could accelerate withdrawals if there is more bad news in the pipeline. Analysts at JPMorgan, in a recent note, said that CS “is not out of the woods yet in terms of stabilizing the franchise.”

“The massive net outflows in wealth management, CS’s core business alongside the Swiss bank, are deeply concerning — even more so as they have not yet reversed.”

Credit Suisse is on a long and painful journey to reverse its downside and restore investors’ confidence. At these extremely depressed levels, the stock may have some upside potential. Still, I don’t see that trade worth taking the risk when there are many attractive opportunities available elsewhere in this bear market.

Disclaimer: As of this writing, the author doesn’t own Credit Suisse shares. The views expressed in this article are solely the author’s opinion and should not be taken as investment advice.