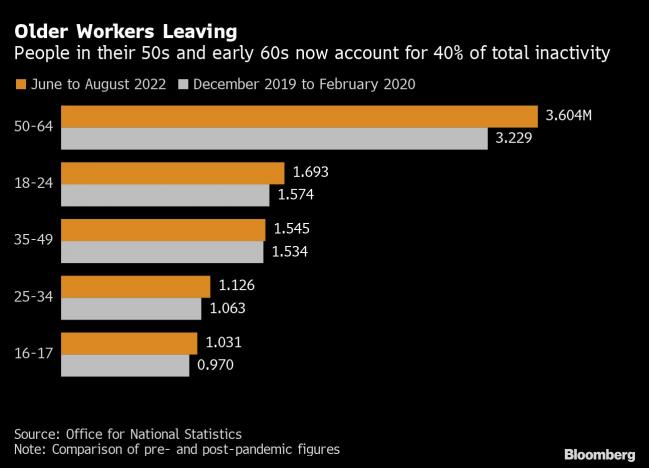 The central bank has estimated that leaving the European Union will cost the UK 3% in permanently lost national output within 15 years and has seen no reason to change the assumption, he added.

Speaking at a conference on Wednesday, Pill stressed that the bank’s focus remained on returning inflation — which hit 11.1% in October — to its 2% target, adding that he expects to see headline inflation tailing-off “quite rapidly” in the second half of next year.

However the BOE’s job has been complicated by Britain’s exit from the European Union, he argued. Leaving the EU is putting upward pressure on prices through three channels: changes to migration, reduced competition and lower trade intensity.

His comments add to questions about the UK’s new trade deal with the EU following newspaper reports that senior figures in government would like closer ties to reduce border frictions and ease skills shortages. It was some of the most detailed and wide-ranging remarks the BOE has made about Brexit.

Ending free movement with the EU has made it more difficult for companies to hire people from overseas, requiring them to support visas. Pill said that while overall migration has not been affected, the nationality of migrant workers has shifted toward more people from outside the EU.

“Whether those those people are as immediately productive and fungible in the labor market, I think is at least open to question,” Pill said.

Brexit has also altered competition between firms, “which probably means there is greater pricing power in value chains, and that has probably proved to be somewhat inflationary,” he said. “The trade channel is having an impact on innovation and productivity.”

“Brexit plays a part, but I don’t think it’s the whole story and probably only part of the story. But to my mind it has had some effect.”

Pill was addressing a panel organized by the Institute of Chartered Accountants in England and Wales, where he also called on the government to help clear blockages in the labor market to ease wage price inflation.

“The ball is in someone else’s court” to fix the UK’s shrinking workforce and the problems with the health service, Pill said, heavily implying these are issues for government to solve.

He said the BOE would be in a stronger position to fight inflation if the productivity and staff workforce dropout problem in the labor force was solved.

“Our job would be easier, and the health of UK economy in terms of growth and dynamism would be better, if those supply side factors were dealt with in an appropriate way,” he said.

The UK is the only developed economy not to have recovered to pre-Covid levels of GDP growth, struggling with tight labor market conditions with 600,000 fewer workers than before the pandemic, concentrated among 50-64 year olds.

Throwing heavy hints that the problem is one for government to address rather than the BOE, Pill suggested that creating incentives for people to be more productive in the labor market could be beneficial in helping to solve supply side constraints, as well as ensuring the NHS delivers care more effectively to keep people in the workforce.