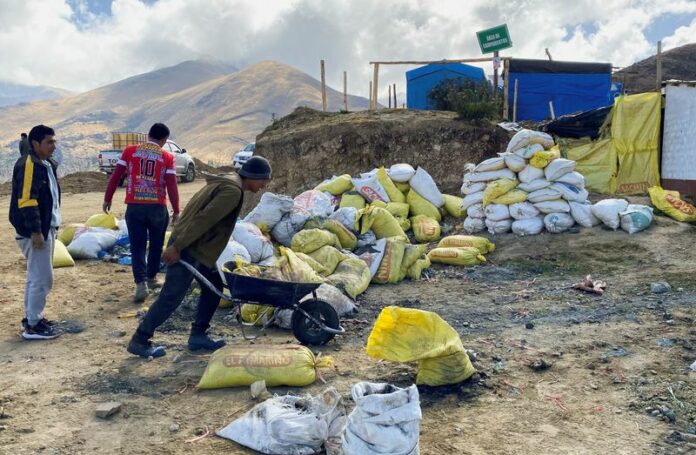 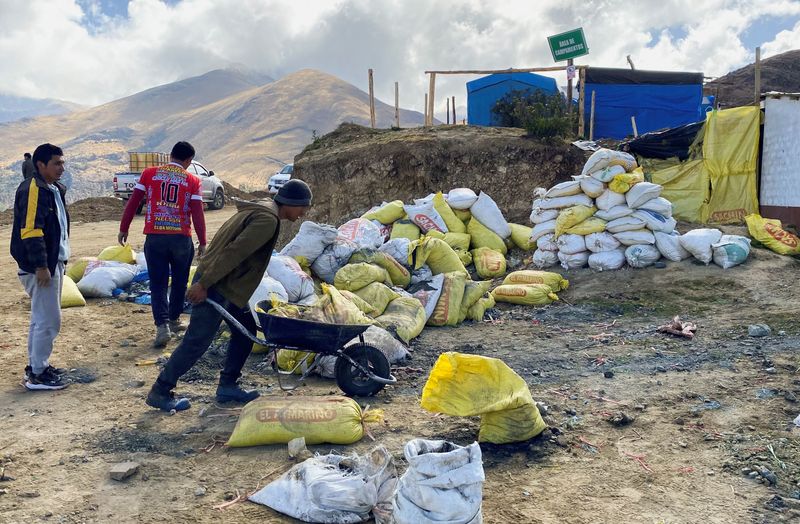 © Reuters. Artisan miners work in an area where other hundreds of artisan miners have found a rich seam of copper in the hills of Tapairihua in Peru’s Andes, October 18, 2022. REUTERS/Marco Aquino

By Marco Aquino and Marcelo Rochabrun

TAPAIRIHUA, Peru (Reuters) – In the hills of Tapairihua in Peru’s Andes, Samuel Retamozo and other artisanal miners have found a rich seam of copper on their indigenous community’s land. Armed with temporary government permits, they started exploiting it earlier this year.

There’s just one problem – the seam is within the site of Southern Copper (NYSE:SCCO) Corp’s planned $2.6 billion Los Chancas mine. One of the world’s biggest copper miners, it also has a permit to dig in the same area.

Grupo Mexico’s Southern Copper aims to start producing here in 2027 after decades of studies. The planned mine is crucial to the company’s goal of producing 1.8 million tonnes of copper annually by 2030.

But the rise of artisanal copper mining – driven by high global metal prices and sustained by a messy government permitting system – is threatening billions in new investments by Southern Copper and others in Peru, according to Reuters reviews of internal company reports, interviews with executives and a visit to Tapairihua to meet the miners.

Small-scale copper miners are now challenging Big Copper for territorial control of rich deposits of the red metal. Artisanal copper mining is creating much-needed income for impoverished Andean Peruvians even as it brings them into conflict with major miners, a rare and previously unreported trend in the world’s No. 2 copper producer.

In Peru, artisanal mining permits have doubled to 80,000 since 2020, government records show. And copper is the new focus.

Southern Copper is not the only mining company in a stand-off with the miners. Chinese-owned MMG Ltd’s nearby Las Bambas copper mine is struggling to develop two new open pits because of artisanal miners who have settled on the same land. The company says its current pit is running out.

While companies often call small-scale miners “informal” or “illegal,” what complicates the matter are two dueling authorizations – one for artisanal mining and another to hold the mining rights to a given area. Mining companies own the latter, known as concessions.

But since 2012 Peru has been granting artisanal mining permits on lands that overlap with concessions, giving the small-scale miners some legal protection, Reuters found after checking the geolocations of the permits and reviewing an internal document in which Peru’s mining ministry did the same.

Southern Copper has asked the government to revoke all artisanal mining permits on its concession. About half have now been canceled, causing resentment in Tapairihua.

“We are going to defend ourselves. At the end of the day we are at home, and from home there is nowhere to go,” Retamozo, a mining engineer and president of the Tapairihua Mining Association, told Reuters.

While artisanal permits have existed since 2012, lower copper prices that decade meant they were not in demand. But copper has risen more than 60% since 2020 due to demand for electric vehicles.

The surge in artisanal copper mining is forcing the government to review its artisanal permitting system, a mechanism that was meant to be a temporary bridge toward formalization and intended mostly for gold miners.

“Our country is a mining country but we haven’t had until now a mining framework that gives a long-term view about small-scale mining,” Alberto Rojas, Peru’s top mining formalization official, told Reuters

Rojas, however, suggested artisanal miners would lose in a dispute against concession holders.

“Where we have concessions we can’t have (artisanal mining permits),” Rojas said. “We can’t disavow the concessions that have already been granted.”

On a recent day in Tapairihua, Reuters visited the artisanal mining operations, where dozens of wood and blue tarpaulin homes were erected, and tunnels supported with wooden beams burrowed into the steep rocky hillside.

In Peru’s Andes many feel the copper under the ground is a right, with mining dating back to the Incas and other cultures that existed before Spain’s colonization. Tapairihua looks down onto the river Antabamba, meaning “copper plain” in the Andean Quechua language.

Many of the miners are also local subsistence farmers who took up mining in search of income. Many declined to be named because they have been sued by Southern Copper over their mining activities.

To extract copper, they use dynamite to explode rock that they bring out in wheelbarrows and bags. Miners earn 80 soles ($20.61) a day, extracting enough rock to fill a handful of trucks a week, usually containing around 5% copper, though this level can rise as high as 18%.

Gherson Quintanilla arrived in Tapairihua earlier this year with a background in artisanal gold mining. He came because he heard copper was abundant and expertise was low.

“My goal is to extract up to two truckloads a day,” he told Reuters.

But artisanal copper mining is not always as small scale.

An internal Las Bambas presentation seen by Reuters estimated informal miners were blasting some 1,950 tonnes of rock per day, almost double their output a year ago.

The report said artisanal miners were using heavy machinery and diggers as well as pneumatic tools.

Overall, it estimated the government has issued 700 permits that overlap with Las Bambas’s concession,

But removing those miners is not straightforward. While Las Bambas and Southern Copper hold mining rights – which grants them access to the mineral underground – in most cases they have yet to buy the property rights to the surface terrain.

That limits their options because they cannot file an eviction claim on land they do not own.

The source close to Las Bambas said MMG recognized this difficulty and anticipated it would have to buy out the miners if it wants them to leave the site of its third pit, set to open in 2027 – if there are no delays.

At the site of its second pit, which was supposed to open this year, Las Bambas has filed eviction claims against the miners there because it already owns that particular parcel of land. The company estimates almost a dozen mining sites in the area. Reuters was unable to determine the number of miners working in them.

‘FUEL TO THE FIRE’

In May, Southern Copper sued Retamozo and other Tapairihua miners, saying their mining permits were non-compliant.

Weeks later a fire destroyed Southern Copper’s local headquarters, which is made up of tents, just minutes downhill from where the small-scale miners are operating. Burned-out cars remain there today.

Nobody was hurt in the fire and no arrests have been made. Peruvian authorities say the matter remains under investigation.

The miners have distanced themselves from the arson, though Retamozo acknowledged the lawsuits have angered them and that some individual members may have acted out of “resentment.”

The number of valid artisanal mining permits in Tapairihua has fallen from 100 to 32 since May, according to government records. An internal mining ministry document seen by Reuters shows that the process is under way to revoke the remaining permits.

Retamozo cautioned about what would happen if those were canceled.

“Canceling them would add fuel to the fire,” he said.