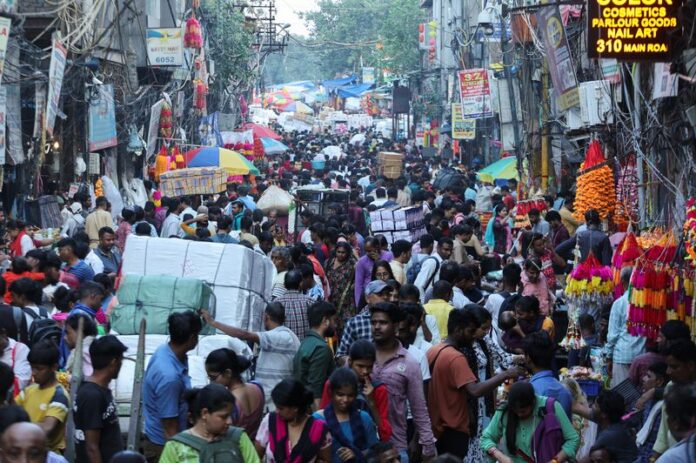 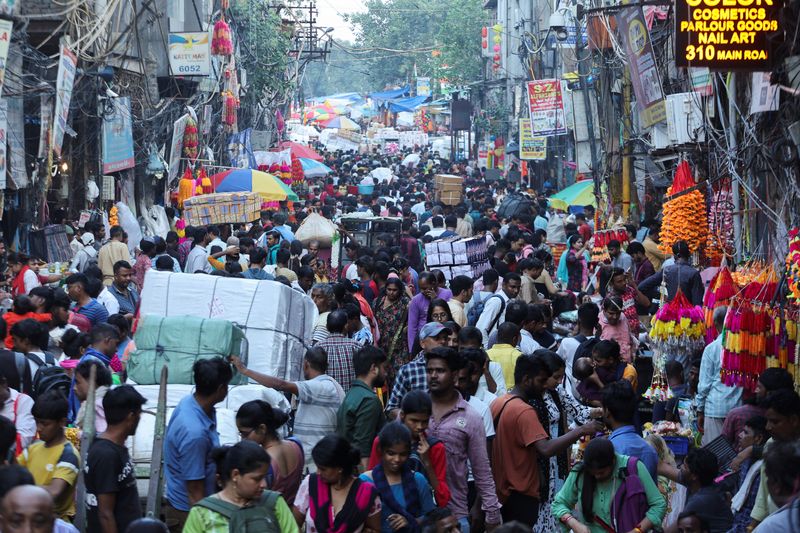 © Reuters. People shop at a crowded market ahead of Diwali, the Hindu festival of lights, in the old quarters of Delhi, India, October 11, 2022. REUTERS/Anushree Fadnavis

NEW DELHI (Reuters) – Annual growth in the Indian economy likely slowed in the July-September quarter as COVID distortions faded, economists said ahead of GDP data due on Wednesday that will provide clues about its resilience in the face of global economic turmoil.

Asia’s third-largest economy is expected to post annual growth of 6.2% in the three months to Sept. 31, according to a Reuters poll, down from explosive growth of 13.5% in the previous quarter, which was inflated by comparison with weak activity during COVID-19 lockdowns.

The gross domestic product data will cast light on the health of the economy as pandemic related disruptions ease and the government steps up spending in the hope that private spending and investments will follow, economists said.

“Several indicators suggest that the Indian economy is making resilient progress in Q2 FY23 in spite of the drag from global spill overs,” State bank of India’s economist Soumya Kanti Ghosh said, using the designation used by the government for the July-September quarter.

Ghosh, however, said annual GDP growth in the period could be slightly slower than the consensus expectation of over 6% as companies have seen a decline in margins and industrial production increased at an annual pace of only 1.5% on average last quarter, its weakest in two years.

India’s Ministry of Statistics and Programme Implementation will release the GDP data at 1200 GMT on Wednesday.

During the September quarter, the Indian government stepped up capital expenditure, spending 1.67 trillion rupees ($20.45 billion) over the three months, more than 40% higher than a year ago.

Consumption has also improved, which suggests that momentum on a non-seasonally adjusted basis is likely to be stronger in the July-September quarter than in the previous three months, economists said.