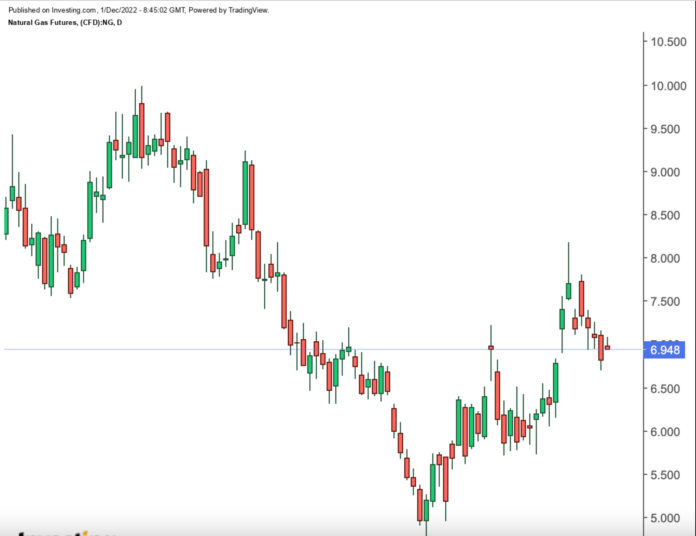 Question: How do you defend natural gas prices that are 90% higher than a year ago when the storage deficit for the fuel has barely changed over the past 12 months while production sits at record highs? Welcome to the dilemma of the “neutral gas trader” (Witty? No, I really mean it).

For argument’s sake, the front-month gas contract on the New York Mercantile Exchange hovered at just under $7 for each million metric British thermal unit as trading opened for December on Thursday. A year ago, the Henry Hub’s comparison benchmark was at $3.73.

But U.S. gas storage stands at just around 3.6 trillion cubic feet (tcf), not much different from end-2021 levels.

The supply-demand dichotomy makes it “hard-pressed for gas market bulls to garner much more upside action in prices,” Alan Lammey, analyst at Houston-based gas markets consultancy Gelber & Associates, said in an email to the firm’s clients on Wednesday.

Be that as it may, the market’s current premium rides on the basis that the weather will turn super cold from this month onwards, unleashing inordinate heating demand that will be matched by corresponding gas burns.

Here’s where it gets tricky.

Will it Get Unbearably Cold, or Not?

The Global Forecast System (GFS) and the ECMWF—representing the U.S. and European weather models, respectively—are presently forecasting an increase in accumulated Gas-Weighted Degree Days (GWDDs) for the period of Nov. 30 through Dec. 13. The problem is the near-term temperature outlook isn’t intensely cold enough to spark any concerns about a widening of the storage deficit, which barring the formation of a Polar vortex, is likely to remain under 100 bcf through about mid-December.

This means that the further the calendar presses into the withdrawal season with adequate gas storage inventories, the less time Polar air will have to produce a notable deficit that could stir up worries about a looming storage crunch.

“If the weather models see a pullback in colder than average temperatures, it would set the stage for a decline in NYMEX January gas futures down to the $6.50s,” he said.

Technical charts seemed to concur with that. “The market faced resistance at $8.12 and that’s pushed prices down toward the Daily Middle Bollinger Band of $6.70, which seems to be acting as temporary support,” said Sunil Kumar Dixit, chief technical strategist at SKCharting.com. Weekly chart action, meanwhile, indicates a double bottom at $5.50, which could translate into a bullish picture long term.

The widening gulf between projections and market realities has led to huge swings in gas prices since the end of summer.

As the newly minted NYMEX January contract took the front-month position on Tuesday, prices oscillated in and out of positive and negative territory before tumbling more than 1.6% to add to Monday’s 2% drop that came despite the ECMWF weather model depicting a colder-than-average outlook during the second week of December.

In Wednesday’s session, gas futures continued to drift lower, plunging 5% at one point amid continued ambiguity in the weather forecast models for a potential Arctic instruction to dive into the nation around mid-December. At settlement, the January contract lost another 2%.

President Biden this week called on Congress to act swiftly in passing legislation that could avert a national rail strike, Rubin noted. “Both Democratic and Republican Congressional leaders have indicated a bill is likely to pass,” he said.

Indeed, the House on Wednesday passed legislation that would require a tentative rail labor agreement and avert a walkout. The bill next goes to the Senate, where Majority Leader Chuck Schumer (Democrat-New York) assured passage.

“Production remains on the upswing with a record pace still on the table in providing an upside price limiter,” energy consulting firm Ritterbusch & Associates said in a note carried by Reuters.

Production on Wednesday bounced back close to 101 bcf/d, according to Bloomberg’s estimate, after dipping below the century mark earlier in the week on maintenance events in Texas and Louisiana.

In a blog carried out by naturalgasintel.com, analysts at Tudor, Pickering, Holt & Co. said despite the decline early this week, gas output in recent weeks had held around the 101-102 bcf per day levels.

“Volumes continue to run slightly ahead of our model, which similar to last year, is ramping into year-end,” the analysts said in a note cited by the blog that referred to strong output activity in the Haynesville Shale and Permian Basin.

The analysts said heating demand was expected to jump on Thursday and Friday, and intensify deeper in December.

But the pace of natural gas consumption increases has proven difficult to gauge, given choppy weather conditions.

“Weather trends have been flip-flopping daily between warmer and colder and that likely aided [the] wild swings” in trading this week, forecaster NatGasWeather also said in comments carried by the naturalgasintel.com blog. The forecaster said that, after weather models trended colder midday Tuesday for Dec. 8-15, data Wednesday reversed warmer for the same period and “lost a decent amount of demand.”

Lammey, however, cautions something: “Should the flood gates open up on demand with a massive amount of Arctic air pouring into the central and eastern regions of the U.S. in mid-December (and particularly down into southern Texas and the Gulf coast states), it could trigger a massive short-covering rally. The buying spree [could] send prices back to above $8,” he says.