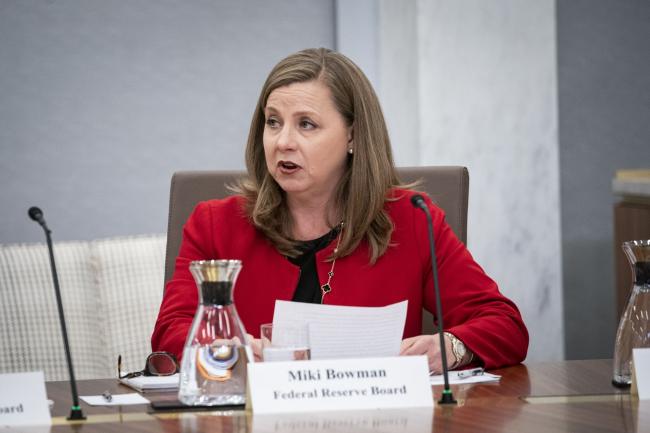 &copy Bloomberg. Michelle Bowman, governor of the US Federal Reserve, speaks during a Fed Listens event in Washington, D.C., US, on Friday, Sept. 23, 2022. Federal Reserve officials this week gave their clearest signal yet that they’re willing to tolerate a recession as the necessary trade-off for regaining control of inflation.

(Bloomberg) — Federal Reserve Governor Michelle Bowman said that while policymakers may soon moderate the pace of interest-rate hikes, persistent inflation may call for a higher peak rate than she had expected a few months ago.

“As we approach a sufficiently restrictive level of the federal funds rate, it will become appropriate for us to slow the pace of rate increases as we determine how high we need to raise the target range,” Bowman said at an event hosted by the KBW CEO strategy forum.

“Until I see our actions actually having some impact that would lower the rate of inflation, I think that my expectation would be that we would have a slightly higher rate than I had anticipated in September,” Bowman said.

The Fed governor said she expected the central bank would need to hold rates at the peak for “some time” to ensure inflation returns to its 2% target.

Inflation has showed some signs of slowing in recent months, but still remains extremely elevated. The personal consumption expenditures price index excluding food and energy, which Powell stressed this week is a more accurate measure of where inflation is heading, rose a below-forecast 0.2% in October from a month earlier, Commerce Department data showed Thursday.

Read more: Powell’s ‘Most Important’ Inflation Indicator Is Cooling Down