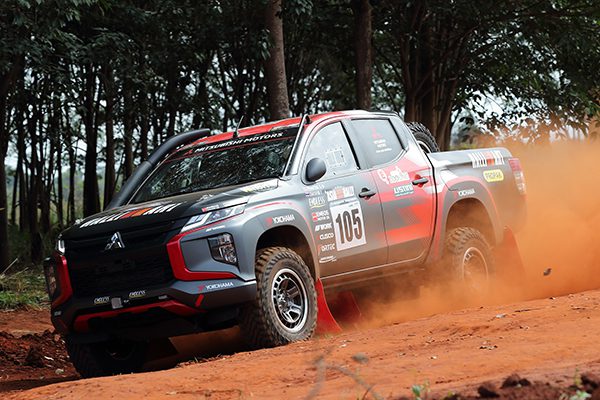 The Yokohama Rubber Co., Ltd., is pleased to announce that a vehicle equipped with its GEOLANDAR M/T G003 mud-terrain tyres for SUVs and pickup trucks won the overall championship in the Asia Cross Country Rally 2022 (hereafter, AXCR), Asia’s largest cross-country rally, which was held this year from November 21 to November 26. Vehicles running on GEOLANDAR M/T G003 tyres dominated the six-day event, capturing four of the top five spots, with 3rd, 4th, and 5th place finishes in addition to the championship. The results once again demonstrate the superior performance and durability of the GEOLANDAR M/T G003 tyre in gruelling off-road races.

The overall championship was won by Team Mitsubishi Ralliart’s team #105 (driver ChayaponYotha, co-driver Peerapong Sombutwong) racing in a Mitsubishi Triton, a modified version of Mitsubishi Motors Corporation’s one-ton pickup truck, one of the company’s global strategic vehicles. After recording the top time in Leg 1 on Day 2 of the event, team #105 increased its lead over the second-place team to 7 minutes and 46 seconds in Leg 2 on Day 3 and held on to its lead for the rest of the race. Another Team Mitsubishi Ralliart team, #118 (driver Rifat Helmy Sungkar, co-driver Chupong Chaiwan) drove its Triton equipped with GEOLANDAR M/T G003 tyres to a 5th place overall finish.

GEOLANDAR M/T G003 tyres deliver superior performance on the full range of off-road surfaces over an exceptionally long lifespan. In addition, the tyre features a sturdy and aggressive design that enhances the off-road driving sensation. YOKOHAMA’s GEOLANDAR tyres have demonstrated their superior off-road performance in many races over the years, including a one-two finish in the 4800 class at the 2021 King Shocks Area BFE Beatdown and a first-place finish in the Trick Truck class of the 2021 King Shocks Laughlin Desert Classic—both races held in the United States.

The AXCR is an FIA (Federation Internationale de l’Automobile) officially sanctioned rally event, similar to the Dakar Rally. Past AXCR races have taken competitors across diverse terrain, ranging from mountains, jungles, beaches, plantation lands, and race car circuits in many Asian countries. This year’s AXCR was the first in three years after the Covid-19 pandemic cancelled the event in 2020 and 2021. The rally started on November 21 in Thailand and covered about 1,500km to the finish line in Cambodia five days later on November 26.

Under Yokohama Rubber’s three-year (2021–2023) medium-term management plan, Yokohama Transformation 2023 (YX2023), the consumer tyre business aims to maximize the sales ratios of high-value-added YOKOHAMA tyres, namely the global flagship ADVAN brand, the GEOLANDAR brand of tyres for SUVs and pickup trucks, and various winter tyres. YX2023 also positions participation in motorsports activities as crucial to the company’s effort to develop new tyre technologies that will further strengthen the ADVAN and GEOLANDAR brands. Yokohama Rubber therefore is again participating in a wide variety of motorsports events in Japan and around the globe, from top-category to grassroots events.

An accident on Day 1 reduced us from a three-car team to a two-car team, but both remaining cars crossed the finish line in top positions. The modified Mitsubishi Triton cars driven by both teams are rugged pickups with a handling performance similar to passenger cars. And the GEOLANDAR M/T G003 tyres’ reliability and strong grip on all road surfaces allowed me to watch the race with peace of mind. As team director, nothing could make me happier than seeing our team use their many years of experience in motorsports to complete the race safely and without trouble.

I am very happy that we were able to put together a talented team that achieved such a good result. And I thank Yokohama Rubber, our tyre supplier, for helping us create an excellent Team GEOLANDAR. We plan to continue putting into practice our motto of “roads build people, and people build cars,” and look forward to passing on this valuable experience to our juniors.