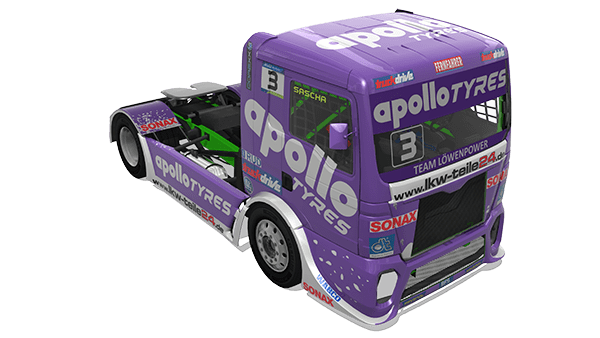 The new team, which will be named SL Apollo Tyres Trucksport, will compete in the 2023 season with a brand-new MAN TGS 2022truck, wrapped in Apollo Tyres branding and instantly recognisable purple colouring.

“We’re very proud to welcome Apollo Tyres to the SL Trucksport family and we’re already looking forward to another successful season,” says Lenz. “With the new commitment from Apollo Tyres in place, our aims for 2023 are simple: to finish first in both the driver and constructors’ championships.”

Benoit Rivallant, President and CEO of Apollo Tyres Europe, adds: “We’re incredibly excited to build on a successful presence for Apollo Tyres in the FIA ETRC championship. This new sponsorship agreement will help us further boost brand awareness across Europe, our fast-growing region for truck and bus tyre sales.”

In addition to a fixed two-year sponsorship agreement, Apollo Tyres will have the option of year-by-year contract extensions based on mutual agreement and overall team performance.

Apollo Tyres Tor Truck Racing signs off
In October, Apollo Tyres announced the end of its three-year partnership with Tor Truck Racing, coinciding with the retirement of the team’s lead driver, Shane Brereton, from the FIA ETRC. After seven years involved in truck racing, Brereton has stepped down to spend more time with his family and concentrate on his business.

Brereton and Apollo Tyres formed a partnership in 2019 and, following the COVID-19 pandemic, secured the Goodyear Cup for ‘Chrome Rated’ drivers in the 2021 season. In 2022, Apollo Tyres Tor Truck Racing finished third in the Promotor’s Championship and secured a class victory at Le Mans in France, which also saw the team claim a Maiden Championship race victory.

“All of us at Apollo Tyres would like to wish Shane a happy retirement and thank him and Tor Trucks for promoting our brand so effectively on the European stage,” says John Nikhil Joy, European Cluster TBR Product Director of Apollo Tyres.

Looking ahead with the FIA European Truck Racing Championship
The FIA European Truck Racing Championship is one of the most spectacular and challenging motor racing series in the world. The drivers are placed into two categories, Chrome and Titan, reflecting their past racing experience and record of race wins. There is a speed limit of 160 km/h (99mph) and the vehicles must meet a minimum weight of 5,300kg and deliver a maximum of 1,200 hp and 5,000 Nm of torque.

The FIA European Truck Racing Championship is taking steps towards enhanced sustainability – for example, all trucks that compete are powered by 100% renewable HVO-diesel.

Truck racing continues to grow in popularity, and the premier FIA truck racing series has a global online and television audience of 60 million and welcomes around 420,000 spectators.