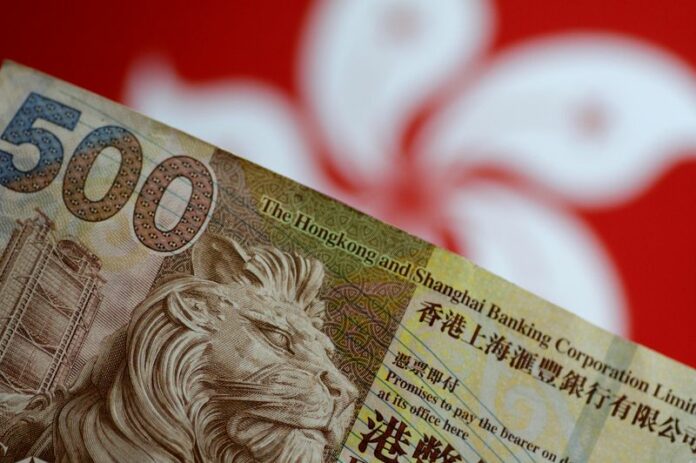 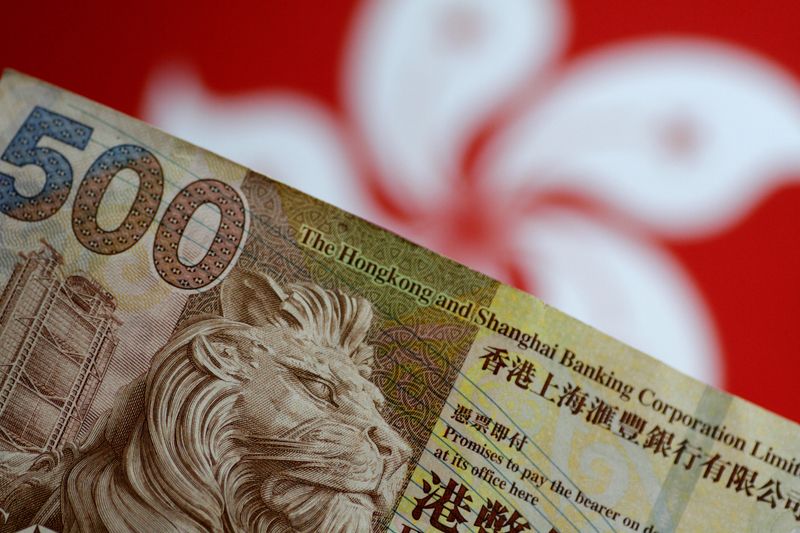 By Tom Westbrook and Georgina Lee

SINGAPORE/HONG KONG (Reuters) -It’s what is known in the markets as a “tail risk”: a highly unlikely scenario in which Hong Kong’s currency peg suddenly snaps. Yet market pricing suggests bets on such a shock are building in the hedge fund world, and some traders say it makes a lot of sense.

Billionaire money manager Bill Ackman went public last month with his wager that the days of the Hong Kong dollar’s 39-year-old peg to the U.S. dollar are numbered.

Ripples in the derivatives market imply he is not alone, as “macro” trading – or betting on big global shifts – swings back into vogue and the prospect of reaping a huge reward for relatively little risk revives a perennially unsuccessful trade.

Most fundamental analysts say such bets are foolish, pointing to the city’s still massive reserves and China’s backing.

But they can be relatively cheap and even profitable regardless of the peg staying intact, and it buys insurance against unlikely but not impossible chains of events, such as a sudden blow-up in China, devaluation or a geopolitical chill.

“For me, the Hong Kong dollar peg is like a delayed, or lagging bet against China,” said Diego Parrilla, who runs Quadriga Igneo, a $240 million fund designed to profit from market turmoil.

“You are taking advantage of the extreme complacency of the market,” he said. “The downside is limited to the premium spent…I’m risking very little and can make a lot.”

Saba Capital founder Boaz Weinstein is also positioned for a break of the peg, and said on Twitter the payoff could be “upwards of 200-to-1”.

The cost and size of these positions is unclear, but Ackman and Parrilla have said their bets are placed using options.

Options are contracts that, for an up-front fee, allow investors to bet on the movement of asset prices without the risk of losses beyond the initial fee, and there are signs that such bets are picking up.

A measure of the spread, or skew, between puts and calls in the options market has hit its widest in about three years in favour of U.S. dollar calls, suggesting bets against the Hong Kong dollar are becoming a little more crowded.

The Hong Kong dollar has been pegged in a tight band between 7.75 and 7.85 per greenback for nearly four decades. Its stability and fungibility have been major foundations for Hong Kong’s success as a financial centre and a hub for money moving into and out of China.

China rarely comments on the peg, but in 2014 its cabinet said the government would “firmly support” Hong Kong in maintaining the peg and the stability of the city. The Hong Kong Monetary Authority (HKMA) says it has “no need and no intention” to change the system, and sufficient reserves to defend the peg.

The HKMA maintains the peg by moving interest rates in lockstep with the United States, and by currency intervention, which drains cash from the system and is designed to drive local rates up until inflows stabilise the currency.

Trades betting against the peg, perhaps encouraged by spectacular examples of broken pegs in the past in places such as Switzerland or Argentina, seem to resurface every time U.S. interest rates go up, and investors’ reasoning varies.

One possible outcome, rather than a clean break, is a re-pegging from dollars to China’s yuan currency.

Yet Chinese and Hong Kong officials have never given any inkling that change is being considered, and analysts do not think the discomfort outweighs the peg’s usefulness.

“As long as capital controls still remain in China…Hong Kong still provides a good window for the inflow and outflow of money,” said Redmond Wong, Greater China strategist at Saxo Markets. “I don’t see why there is any immediate trigger … to change the status quo.”

Even wrong bets on the peg breaking can be profitable, and protected by the peg itself.

If, rather than options, traders bet against the peg using forwards – another contract where parties agree to trade currencies in the future – the position can earn money if the Hong Kong dollar doesn’t rise. Losses would also be capped by the strong end of the currency band.

In the short-term, the market is moving against this style of trade as local interest rates and the Hong Kong dollar go up.

But some investors still see value in longer-dated contracts. A one-year forward can stay profitable if spot prices are weaker than about 7.78 per dollar, where the currency traded on Friday, in a year’s time.

“The far forwards market still prices in higher U.S. rates than Hong Kong rates,” said Mukesh Dave, founder and CIO at Aravali Asset Management in Singapore, which in theory ought to contain gains in the Hong Kong dollar.

The cost of notional $1 million one-year U.S. dollar call option with a strike price of HK$7.95, for comparison, is about 55 basis points or $5,500, according to Dave.

Although costlier up front, and without the prospect of profit if the peg remains, bettors seem to be preferring the options route and say it offers a better risk-reward.

John Floyd, who runs his own hedge fund from New Jersey and recommended options to short the yuan and Hong Kong dollar in February, said a forwards position is dangerously exposed should China end the peg with a conversion to yuan at a price stronger than the currency band.

“The only way to express this trade that both controls downside risk and allows for the upside profit … is through outright long option exposure.”