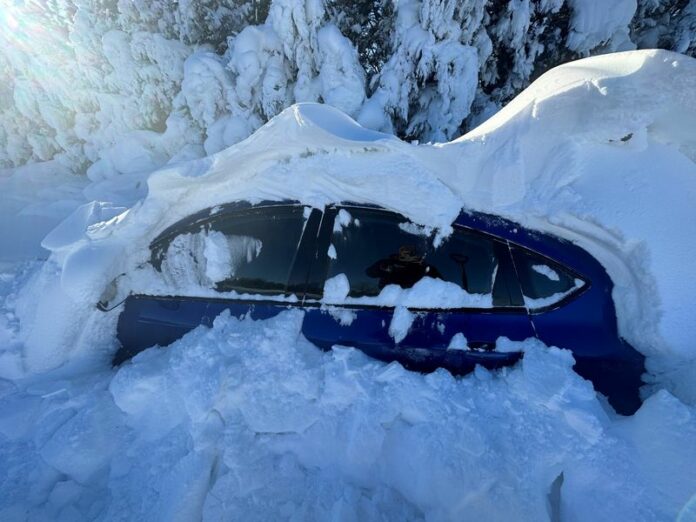 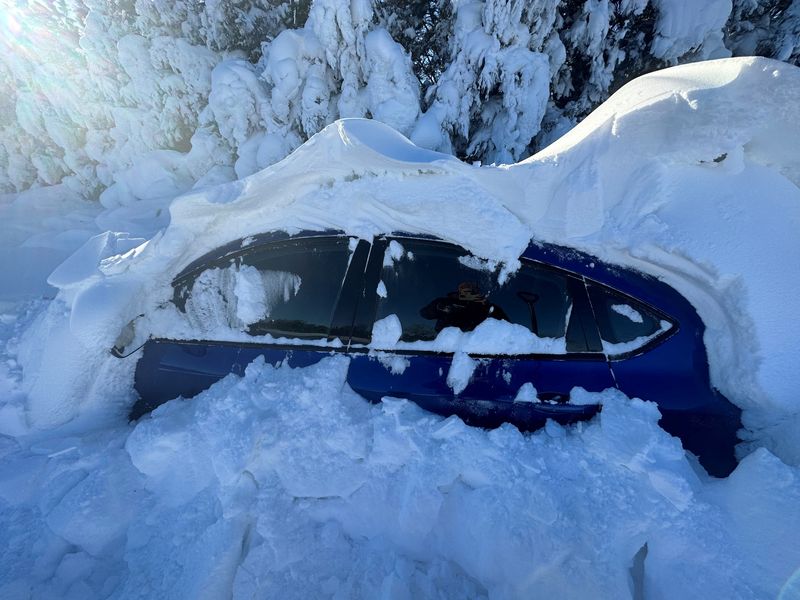 © Reuters. A view of a car covered in snow after heavy snowfall in Regent, North Dakota, U.S. December 23, 2022, in this picture obtained from social media. Blake Rafferty/[email protected]/via REUTERS

(Reuters) – An arctic blast gripped much of the United States on Saturday driving power outages, flight cancellations and car wrecks, as plummeting temperatures were predicted to bring the coldest Christmas Eve on record to several cities from Pennsylvania to Georgia.

Temperatures are forecast to top out on Saturday at just 7 degrees Fahrenheit (minus 13 Celsius) in Pittsburgh, surpassing its previous all-time coldest Christmas Eve high of 13 F, set in 1983, the National Weather Service (NWS) said.

Cities in Georgia and South Carolina – Athens and Charleston – were likewise expected to record their coldest daytime Christmas Eve high temperatures, while Washington, D.C., was forecast to experience its chilliest Dec. 24 since 1989.

The flurry of yuletide temperature records were predicted as a U.S. deep freeze sharpened by perilous wind chills continued to envelope much of the eastern two-thirds of the nation into the holiday weekend.

The freeze already produced fatal car collisions around the country with CNN reporting at least 14 dead from weather-related accidents.

The arctic cold combined with a “cyclone bomb” of heavy snow and howling winds roaring out of the Great Lakes region on Friday and into the Upper Mississippi and Ohio valleys wreaked havoc on power systems, roadways and commercial air traffic.

Extreme winter weather was blamed for at least five deaths on Friday.

Two motorists were killed, and numerous others injured, in a 50-vehicle pileup that shut down the Ohio Turnpike in both directions during a blizzard near Toledo, forcing an evacuation of stranded motorists by bus to keep them from freezing in their cars, officials said.

Three more weather-related fatalities were confirmed in neighboring Kentucky – two from car accidents and one a homeless person who died of exposure.

Freezing rain and ice from a separate storm in the Pacific Northwest made travel treacherous there as well on Friday.

From the Canadian to the Mexican border and coast to coast, some 240 million people in all were under winter weather warnings and advisories of some sort on Friday, according to the weather service.

The NWS said its map of existing or impending meteorological hazards “depicts one of the greatest extents of winter weather warnings and advisories ever.”

With energy systems across the country strained by rising demand for heat and storm-related damage to transmission lines, as many as 1.8 million U.S. homes and businesses were left without power as of early Saturday morning, according to tracking site Poweroutage.us.

The disruptions upended daily routines and holiday plans for millions of Americans during one of the busiest travel periods of the year.

The American Automobile Association had estimated that 112.7 million people planned to venture 50 miles (80 km) or more from home between Friday and Jan. 2. But stormy weather heading into the weekend likely ended up keeping many of them at home.

The city of Buffalo and its surrounding county on the edge of Lake Erie in western New York imposed a driving ban, and all three Buffalo-area border crossing bridges were closed to inbound traffic from Canada due to the weather.

The severe weather prompted authorities across the country to open warming centers in libraries and police stations while scrambling to expand temporary shelter for the homeless. The challenge was compounded by the influx of migrants crossing the U.S. southern border by the thousands in recent weeks.

Bitter cold intensified by high winds extended through the Deep South to the U.S.-Mexico border, plunging wind chill factors to single digits Fahrenheit (minus 18 to minus 13 Celsius) in El Paso, Texas. Exposure to such conditions can cause frostbite within minutes.