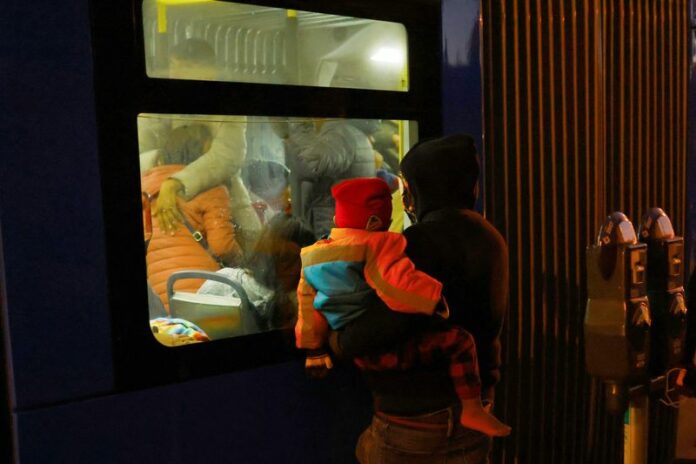 ‘Where else can I go?’: Migrants face freezing Christmas at U.S.-Mexico border 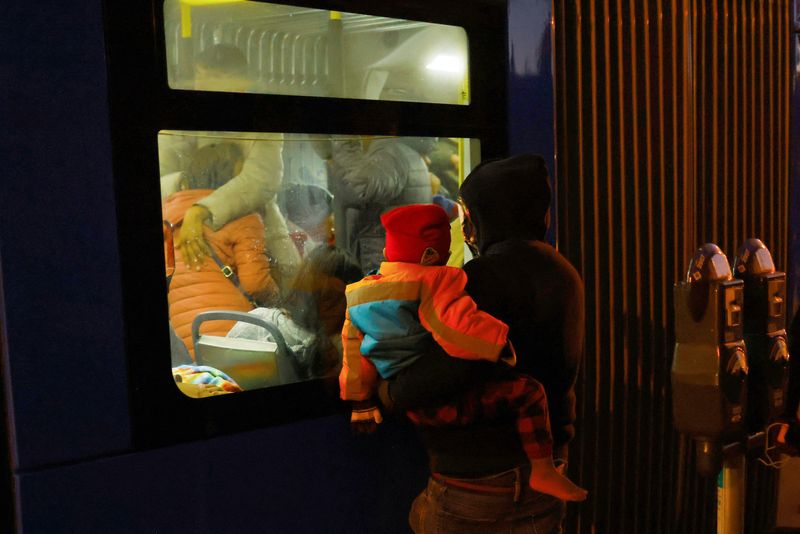 © Reuters. Migrants, mostly from Venezuela, take refuge from the cold on a public transport bus during a night of low temperatures, while another migrant with his son watches them from outside, in downtown El Paso, Texas, U.S., December 23, 2022. REUTERS/Jose Luis G

MATAMOROS, Mexico (Reuters) – Hundreds of migrants prepared to camp in the cold at Mexico’s northern border over Christmas, hoping for a swift reversal in U.S. migration restrictions as they endure the bite of a winter storm ravaging the United States.

After the U.S. Supreme Court this week ruled that restrictions known as Title 42 could stay in place temporarily, many migrants are facing a Christmas weekend of what Mexico’s weather service called a “mass of arctic air.”

“I’m staying here, where else can I go?” said Walmix Juin, a 32-year-old Haitian migrant preparing for the weekend in a flimsy tent in the city of Reynosa, across the border from McAllen, Texas. “I never thought I would spend a Christmas like this.”

Temperatures in the border cities of Matamoros and Reynosa, where several thousand people are camping outside or in bare-bones shelters, are expected to hover around freezing on Saturday and only slightly improve on Sunday.

Further west in Ciudad Juarez, where hundreds of migrants have been lining up to seek asylum at the border with El Paso, Texas, temperatures are forecast to drop to minus six degrees Celsius (21 degrees Fahrenheit). Many have been sleeping in the streets.

Officials have provided more space in shelters in recent days, but some migrants are wary.

Wearing a baseball hat and jacket zipped to the chin, 29-year-old Venezuelan Antony Rodriguez has tried to stay warm in Matamoros by huddling under blankets in a tent with five relatives, he showed in a video shared with Reuters.

After an arduous trek across Central America and Mexico, Rodriguez said he turned down the offer of a shelter because he feared authorities would bus them south.

“We feel they’ll send us back,” he said.

Another Venezuelan in Matamoros, Giovanny Castellanos, said he was camping out in a tent on the border, wrapped up in blankets, to keep abreast of developments.

“If you go to shelter you’re further from here where the real information is,” the 32-year-old said.

Title 42 allows the United States to return migrants to Mexico or certain countries without a chance to request asylum. It had been due to end on Dec. 21 before the court ruling. Without clarity on when it will finish, some officials worry their cities could be overwhelmed if more migrants turn up.