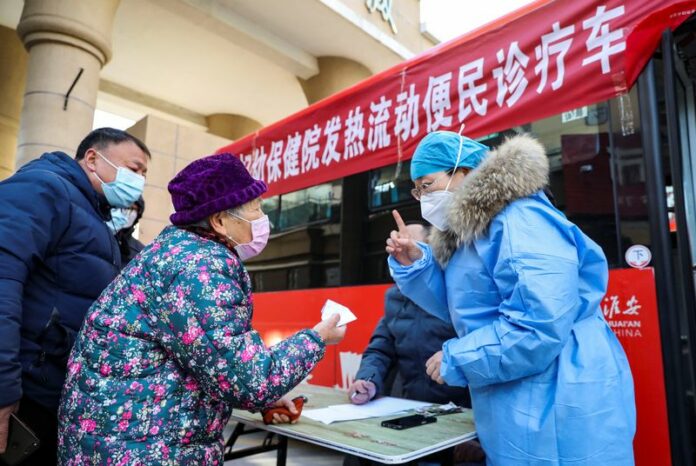 Beijing, Shanghai residents back to work as China limps towards living with COVID 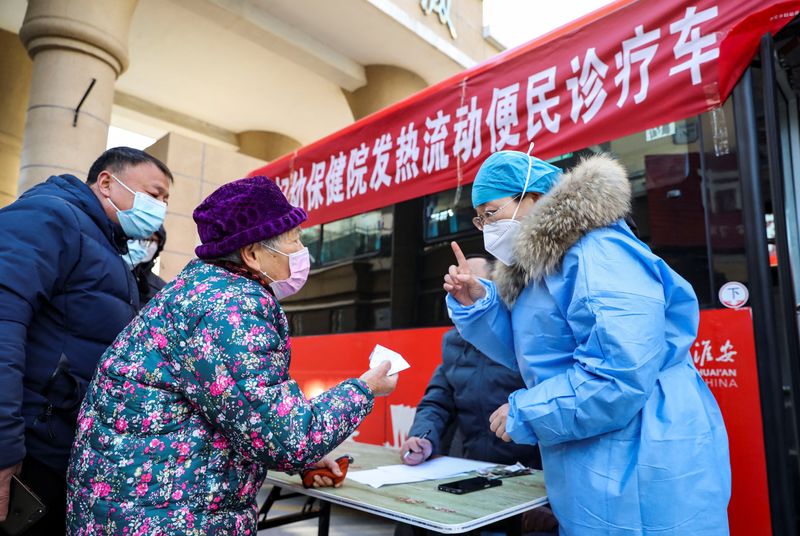 © Reuters. A medical worker provides instructions to a resident at a mobile fever clinic converted from a bus amid the coronavirus disease (COVID-19) outbreak, in Huaian, Jiangsu province, China December 25, 2022. cnsphoto via REUTERS

By Bernard Orr and Xihao Jiang

BEIJING/SHANGHAI (Reuters) -Mask-wearing Beijing and Shanghai commuters crowded subway trains on Monday, with China’s two biggest cities edging closer to living with COVID-19, as millions have been infected with the largely unchecked virus across the country.

After three years of ruthless anti-coronavirus curbs, President Xi Jinping scrapped the country’s zero-COVID policy of lockdowns and relentless testing this month in the face of protests and a widening outbreak.

Health experts and residents worry that China’s statistics, which show no new COVID deaths reported for the six days through Sunday, do not reflect the actual number of fatalities, and that the country’s fragile health system is being overwhelmed.

After the initial shock of the policy U-turn, and a few weeks in which people in Beijing and Shanghai stayed indoors, either dealing with the disease or trying to avoid it, there are signs that life is on track to returning closer to normal.

Subway trains in Beijing and Shanghai were packed, while some major traffic arteries in the two cities were jammed with slow-moving cars on Monday as residents commuted to work.

“I am prepared to live with the pandemic,” said 25-year-old Shanghai resident Lin Zixin. “Lockdowns are not a long-term solution

This year, in an effort to prevent infections from spiralling out of control across the country, the 25 million people in China’s commercial hub endured two months of bitter isolation under a strict lockdown that lasted until June 1.

Shanghai’s lively streets were a sharp contrast with the atmosphere in April and May, when hardly anyone could be seen outside.

An annual Christmas market held at the Bund, a commercial area in Shanghai, was popular with city residents over the weekend. Crowds thronged the winter festive season at Shanghai Disneyland and Beijing’s Universal Studios on Sunday, queuing up for rides in Christmas-themed outfits.

The number of trips to scenic spots in the southern city of Guangzhou this weekend increased by 132% from last weekend, local newspaper The 21st Century Business Herald reported.

“Now basically everyone has returned to a normal routine,” said a 29-year-old Beijing resident surnamed Han. “The tense atmosphere has passed.”

China is the last major country to move toward treating COVID as endemic. Its containment measures had slowed the $17-trillion economy to its lowest growth rate in nearly half a century, disrupting global supply chains and trade.

The world’s second-largest economy is expected to suffer further in the short-term, as the COVID wave spreads toward manufacturing areas and workforces fall ill, before bouncing back next year, analysts say.

Tesla (NASDAQ:TSLA) suspended production at its Shanghai plant on Saturday, bringing ahead a plan to pause most work at the plant in the last week of December. The company did not give a reason.

The world’s most populous country has narrowed its definition for classifying deaths as COVID-related, counting only those involving COVID-caused pneumonia or respiratory failure, raising eyebrows among world health experts.

The country’s health care system has been under enormous strain, with staff being asked to work while sick and retired medical workers in rural communities being rehired to help, according to state media.

The provincial government of Zhejiang, a big industrial province near Shanghai with a population of 65.4 million, said on Sunday it was battling about a million new daily COVID-19 infections, a number expected to double in the days ahead.

Health authorities in the southeastern Jiangxi province have said infections would hit an apex in early January, adding that there could be other peaks as people travel next month for Lunar New Year celebrations, state media reported.

They warned that the wave of infections would last three months and that about 80% of the province’s 45 million residents could get infected.

The city of Qingdao, in the eastern Shandong province, has estimated that up to 530,000 residents were being infected each day.

Cities across China have been racing to add intensive-care units and fever clinics, facilities designed to prevent the wider spread of contagious disease in hospitals.

The Beijing municipal government has said the number of fever clinics in the city had increased from 94 to almost 1,300, state media said. Shanghai has 2,600 such clinics and has transferred doctors from less-strained medical departments to help out.

Worries remain about the ability of less-affluent cities in China to cope with a surge in severe infections, especially as hundreds of millions of rural migrant workers are expected to return to their families for Lunar New Year.

“I am worried the flow of people will be huge … (and) the epidemic will break out again,” said Lin, the Shanghai resident.