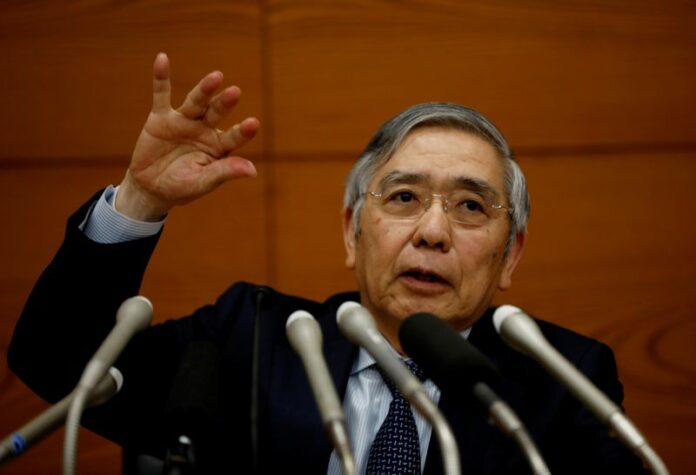 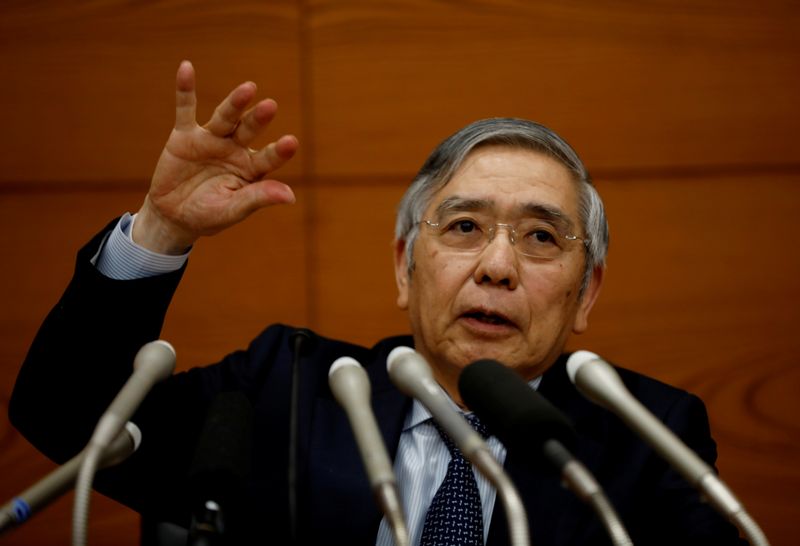 TOKYO (Reuters) -Bank of Japan (BOJ) Governor Haruhiko Kuroda on Monday brushed aside the chance of a near-term exit from ultra-loose monetary policy but voiced hope that intensifying labour shortages will prod firms to raise wages.

Kuroda said the BOJ’s decision last week to widen the allowance band around its yield target was aimed at enhancing the effect of its ultra-easy policy, rather than a first step toward withdrawing its massive stimulus programme.

“This is definitely not a step toward an exit. The Bank will aim to achieve the price target in a sustainable and stable manner, accompanied by wage increases, by continuing with monetary easing under yield curve control,” Kuroda said in a speech delivered to a meeting of business lobby Keidanren.

He also said Japan’s average consumer inflation will likely slow below the BOJ’s 2% target in the next fiscal year as the effects of soaring import costs dissipate.

But Kuroda said wage growth will likely increase gradually due to intensifying labour shortages and structural changes in Japan’s job market, which are leading to higher pay for temporary workers and a rise in the number of permanent workers.

“Labour market conditions in Japan are projected to tighten further, and firms’ price- and wage-setting behaviour is also likely to change,” Kuroda said.

“In this sense, Japan is approaching a critical juncture in breaking out of a prolonged period of low inflation and low growth,” he said.

The strength of wage growth is seen as key to how soon the BOJ could raise its yield curve control (YCC) targets, which are set at -0.1% for short-term interest rates and around 0% for the 10-year bond yield.

The BOJ shocked markets last week with a surprise widening of the band around its 10-year yield target. Kuroda had described the move, which allows long-term rates to rise more, as aimed at easing some of the costs of prolonged stimulus rather than a prelude to a full-fledged policy normalisation.

With inflation exceeding its 2% target, however, markets are rife with speculation that the BOJ will raise the yield targets when the dovish governor Kuroda’s term ends in April next year.

While more companies are starting to hike prices to pass on higher costs to households, the BOJ must examine whether such changes in corporate price-setting behaviour will take hold as a new norm in Japan, Kuroda said.

The outcome of next year’s spring wage negotiations between big companies and unions will also be key to the outlook for wage growth, he said.

Japan’s core consumer inflation hit a fresh four-decade high of 3.7% in November as companies continued to pass on rising costs to households, a sign that price hikes were broadening.

But wages have barely risen for permanent workers, as companies remained cautious about increasing fixed costs amid an uncertain economic outlook.