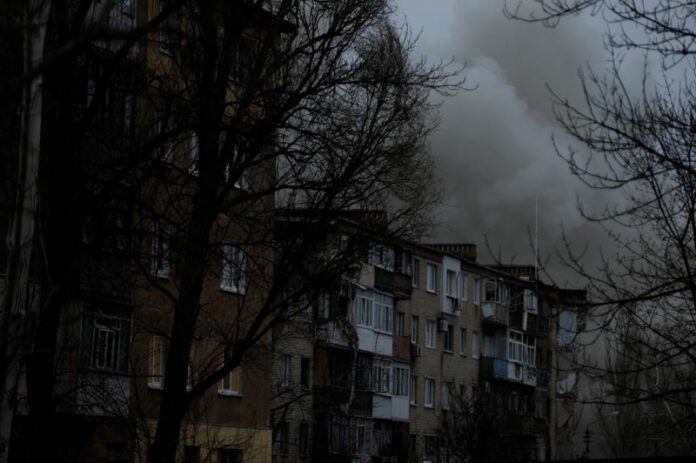 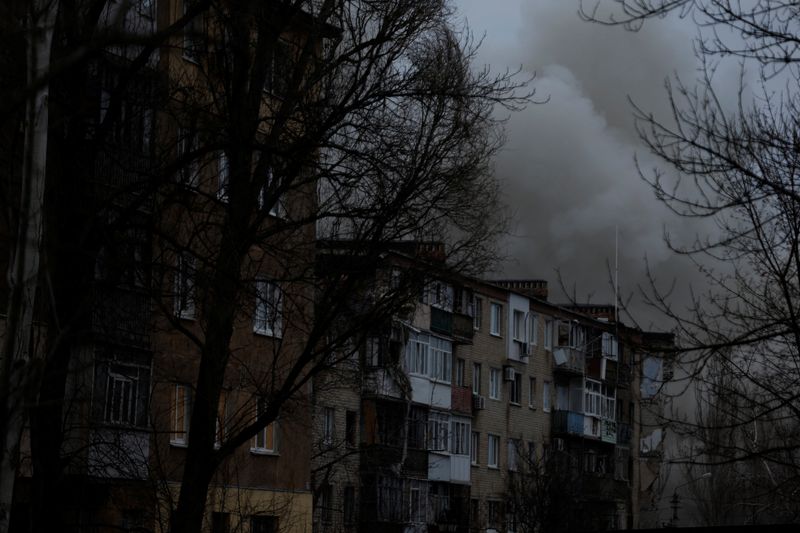 By Pavel Polityuk and Guy Faulconbridge

KVIV/MOSCOW (Reuters) -Russian forces bombarded scores of towns in Ukraine on Christmas Day as Russian President Vladimir Putin said he was open to negotiations, a stance Washington has dismissed as posturing because of continued Russian attacks.

Russia on Sunday launched more than 10 rocket attacks on the Kupiansk district in the Kharkiv region, shelled more than 25 towns along the Kupiansk-Lyman frontline, and in Zaporizhzhia hit nearly 20 towns, said Ukraine’s top military command.

Russia’s defence ministry said on Sunday that it had killed about 60 Ukrainian servicemen the previous day along the Kupiansk-Lyman line of contact and destroyed numerous pieces of Ukrainian military equipment.

Reuters was not able to independently verify the reports.

Putin’s Feb. 24 invasion of Ukraine – which Moscow calls a “special military operation” – has triggered the biggest European conflict since World War Two and confrontation between Moscow and the West since the 1962 Cuban Missile Crisis.

Despite Putin’s latest offer to negotiate, there is no end in sight to the 10-month conflict.

“We are ready to negotiate with everyone involved about acceptable solutions, but that is up to them – we are not the ones refusing to negotiate, they are,” Putin told Rossiya 1 state television in an interview broadcast on Sunday.

An adviser to Ukrainian President Volodymyr Zelenskiy said Putin needed to return to reality and acknowledge it was Russia that did not want talks.

Russian attacks on power stations have left millions without electricity, and Zelenskiy said Moscow would aim to make the last few days of 2022 dark and difficult.

“Russia has lost everything it could this year. … I know darkness will not prevent us from leading the occupiers to new defeats. But we have to be ready for any scenario,” he said in an evening video address on Christmas Day.

Ukraine has traditionally not celebrated Christmas on Dec. 25, but Jan. 7, the same as Russia. However, this year some Orthodox Ukrainians decided to celebrate the holiday on Dec. 25 and Ukrainian officials, starting with Zelenskiy and Ukraine’s prime minister, issued Christmas wishes on Sunday.

The Kremlin says it will fight until all its territorial aims are achieved, while Kyiv says it will not rest until every Russian soldier is ejected from the country.

Asked if the geopolitical conflict with the West was approaching a dangerous level, Putin on Sunday said: “I don’t think it’s so dangerous.”

Kyiv and the West say Putin has no justification for what they cast as an imperial-style war of occupation.

Russian-supplied Iskander tactical missile systems, which are capable of carrying nuclear warheads, and S-400 air defence systems have been deployed to Belarus and are prepared to perform their intended tasks, a senior Belarusian defence ministry official said on Sunday.

“Our servicemen, crews have fully completed their training in the joint combat training centres of the armed forces of the Russian Federation and the Republic of Belarus,” Leonid Kasinsky, head of the Main Directorate of Ideology at the ministry, said in a video posted on the Telegram messaging app.

“These types of weapons (Iskander and S-400 systems) are on combat duty today and they are fully prepared to perform tasks for their intended purpose,” Kasinsky added.

It is not clear how many of the Iskander systems have been deployed to Belarus after Putin said in June that Moscow would supply Minsk with them and the air defence systems.

The news follows Putin’s visit to Minsk on Dec. 19 amid fears in Kyiv he would pressure Belarus to join a fresh ground offensive and open a new front in his faltering invasion.

Russian forces used Belarus as a launch pad for their abortive attack on the Ukrainian capital, Kyiv, in February, and there has been a growing flurry of Russian and Belarusian military activity in recent months.

The Iskander-M, a mobile guided missile system code named “SS-26 Stone” by NATO, replaced the Soviet-era “Scud”. The guided missiles have a range of up to 500 km (300 miles) and can carry conventional or nuclear warheads.

That range reaches deep into neighbours of Belarus: Ukraine and NATO member Poland, which has very strained relations with Minsk.

Blasts were heard at Russia’s Engels air base, hundreds of kilometres (miles) from the Ukraine frontlines, Ukrainian and Russian media reported on Monday.

There was no immediate official confirmation and Reuters was not able to independently verify the reports.

The air base, near the city of Saratov, about 730 km (450 miles) southeast of Moscow, was hit on Dec. 5 in what Russia said were Ukrainian drone attacks on two Russian air bases that day. The strikes dealt Moscow a major reputational blow and raised questions about why its defences failed, analysts said.