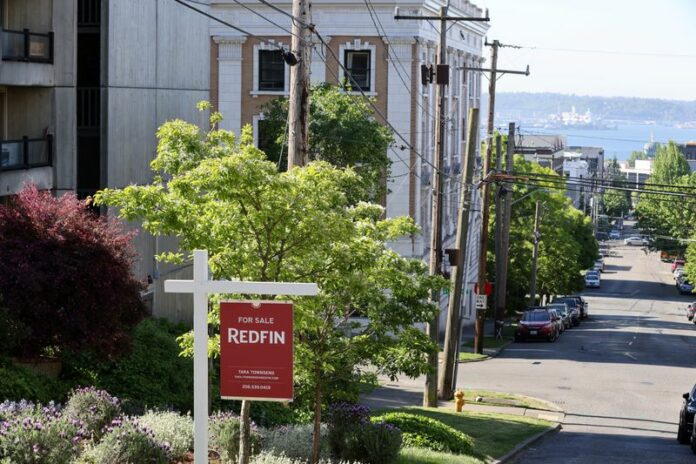 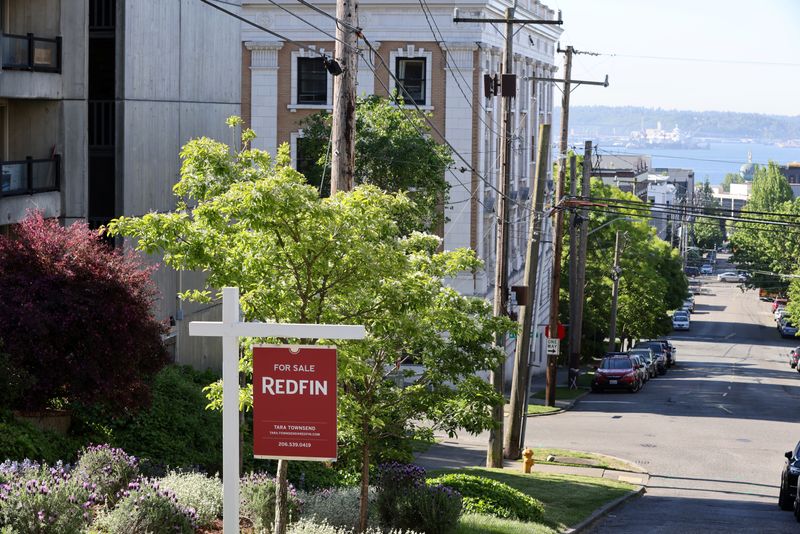 © Reuters. A “For Sale” sign is posted outside a residential home in the Queen Anne neighborhood of Seattle, Washington, U.S. May 14, 2021. REUTERS/Karen Ducey/File Photo

(Reuters) – Annual price growth in the increasingly fragile U.S. housing market slid into the single digits in October for the first time in about two years when mortgage rates that month surged above 7% and further stifled demand, a pair of closely watched surveys showed on Tuesday.

On a month-over-month basis, S&P Case Shiller’s index fell for a fourth straight month, while FHFA’s gauge was unchanged.

“As the Federal Reserve continues to move interest rates higher, mortgage financing continues to be a headwind for home prices,” Craig Lazzara, managing director at S&P DJI, said in a statement.

The housing market has suffered the most visible effects of aggressive Fed interest rate hikes that are aimed at curbing high inflation by undercutting demand in the economy. This month the Fed raised rates again by half a percentage point, capping a year that saw its benchmark rate shoot from near zero in March to between 4.25% and 4.5% now – the swiftest rates have risen since the early 1980s. Fed officials projected rates would climb further in 2023, likely topping 5%.

Unlike other parts of the economy – many of which have yet to show a significant impact from the Fed’s actions – the housing market reacts in near real-time to the jump in borrowing costs engineered by the central bank.

The 30-year fixed mortgage rate breached 7% in October for the first time since 2002, more than doubling in the span of nine months, pulling the rug out from what had been a red-hot housing market fueled by historically low borrowing costs and a rush to the suburbs during the coronavirus pandemic.

Data last week showed the combined annual sales rates of new and existing homes through November had slumped by 35% since January – among the fastest falls on record – to the slowest since late 2011. New single-family housing starts and permit issuance skidded to a two-and-a-half-year low last month as well.

While mortgage rates have retreated since early November to an average 6.34% last week, according to data from the Mortgage Bankers Association, they remain well above the 3.31% a year ago at this time and will continue to weigh on the housing sector.

“Given the continuing prospects for a challenging macroeconomic environment, prices may well continue to weaken,” S&P DJI’s Lazzara said.

Economists do not, however, see a repeat of the housing price crash witnessed in the financial crisis when prices by S&P Case Shiller’s measure fell year-over-year for a full five years from March 2007 through April 2012. Unlike then, the supply of homes on the market remains extraordinarily limited and should keep a floor under house prices.

The National Association of Realtors earlier this month projected prices for existing homes – by far the largest part of the market – should remain more or less flat in 2023.