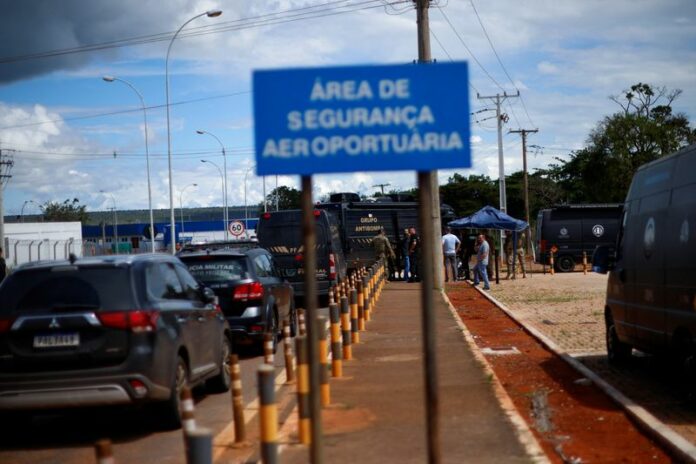 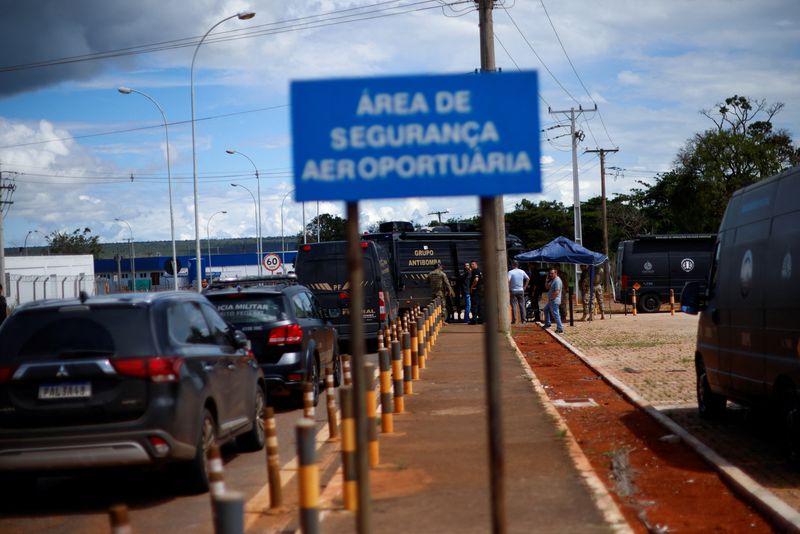 © Reuters. A vehicle of the anti-bomb group of the Federal Police is pictured as a robot of the squad is seen near what is believed to be an explosive artefact in Brasilia, Brazil, December 24, 2022. REUTERS/Adriano Machado

A small business owner from the deep interior of Brazil, Baldin, 55, joined thousands of hardcore Bolsonaro supporters who had set up an encampment outside army headquarters, from where they were urging the military to stage a coup.

On Nov. 26, Baldin took to the camp’s stage and made a call to gun-owners across Brazil, a group that has surged to nearly a million people since Bolsonaro began loosening gun laws in 2019. He asked them to join him in Brasilia to protest against Lula’s electoral certification.

“Come here and show your presence,” Baldin said, adding that Brazil’s yellow-and-green flag “may well end up red – but with my blood.”

Baldin’s battle cry sparked a chain of events in and around the camp that culminated several days later in a violent mob of Bolsonaristas trying to invade the federal police headquarters on Dec. 12, according to over a dozen camp-dwellers, family members and police interviewed by Reuters, as well as previously unreported documents from the Supreme Court, which is overseeing sealed probes into Brazil’s post-election protests.

Baldin’s journey – from the country’s sleepy agricultural heartland to being a protagonist in an armed, grass-roots movement accused of undermining democracy – is indicative of a broader radicalization in Brazil under Bolsonaro that Lula will have to contend with when he takes office Jan. 1.

A few days after his speech, Baldin was arrested inside the camp on the orders of Supreme Court Justice Alexandre de Moraes, who has led contentious probes into Bolsonaro and his allies. Baldin is suspected of attempting to violently overthrow the democratic state and create a paramilitary force.

Baldin’s detention sparked fear among camp-dwellers, who thought Bolsonaro and the army would protect them from the Supreme Court, according to protestors and police.

But by the following week, after Moraes ordered the arrest of a second camp-dweller who had questioned Lula’s victory, indigenous leader Jose Acacio Serere Xavante, their initial fear had turned to anger, sparking a violent rampage that left downtown Brasilia littered with burned-out buses and cars.

“With the arrest of Baldin, there was a feeling of vulnerability. Lots of people realized this wasn’t a safe place,” said Lucas Mello, a 22-year-old TikToker who has lived in the camp since Dec. 5. “With the Indian, Serere, it wasn’t fear. It was rage.”

Three days after the riots, Moraes released Baldin, sent him home with an ankle bracelet, and barred him from talking to the media. Moraes said there was a clear link between his call to arms and the subsequent rampage.

“The heavily violent (protests) … occurred in exactly the same context that motivated the temporary arrest of Milton Baldin,” Moraes wrote in his sealed ruling. “That is, the criminal and coup-mongering dissatisfaction with the results of the 2022 general elections.”

The Dec. 12 riots marked the start of a menacing new turn in and around the camp.

Two weeks later, police found a bomb by Brasilia’s airport, and arrested George Washington Sousa, who confessed to making the device and plotting with other camp-dwellers to explode it.

Sousa, who drove to the camp with eight firearms, 1,000 bullets and five sticks of dynamite in his trunk, said he hoped the bomb would “provoke a military intervention … to prevent the installation of communism in Brazil.”

Baldin’s journey to Brasilia was years in the making.

He voted twice for Lula during his 2003-10 presidency, and also backed his hand-picked successor Dilma Rousseff, but became disenchanted with the left’s corruption and economic mismanagement, Baldin’s wife, Adelia Silva, told Reuters.

By 2018, when Lula was jailed for graft, the couple were increasingly receptive to Bolsonaro, a nationalist disrupter who was elected that year with a pledge to turbocharge agribusiness, the dominant industry in their home state of Mato Grosso.

The Bolsonaro years were good to the Baldins.

A booming agricultural sector boosted Milton’s heavy machinery business, allowing him to buy himself and his wife two new cars. Silva said he also became a registered gun-owner, acquiring two pistols that he used to compete at a local gun club.

He kept abreast of the news via pro-Bolsonaro Youtube channels, some of which have been targeted by federal courts for allegedly peddling election disinformation.

The president has suggested, without evidence, that Brazil’s electronic voting system is liable to fraud. Many in Mato Grosso, a bastion of Bolsonaro support, believed him.

After Lula’s victory, the Baldins’ hometown of Sinop became a national epicenter of dissent, with truckers blocking a crucial grains-exporting highway. Baldin joined a camp in the town’s soccer stadium before heading to Brasilia on Nov. 10, where he pitched his tent with other Sinop “patriots.”

Xavante, an indigenous leader and evangelical pastor, is also from Mato Grosso. It was unclear if he and Baldin crossed paths within the Brasilia camp, which has fluctuated in size from 2,000 to 20,000 people, but has thinned in recent days.

“Lula will not be inaugurated (on Jan. 1),” Xavante insisted at one protest.

Although the armed forces enjoyed a prominent role in Bolsonaro’s government, they have ignored calls for a coup.

Yet some army officers quietly supported protestors, according to Oswaldo Eustáquio, a one-time camp-dweller, and to a federal cop with knowledge of the situation.

Protestors have been allowed to shower inside the building of POUPEX, a military mortgage lender whose main office sits within the grounds of the army headquarters, said Eustáquio, who left the camp amid fears he too was going to be arrested.

POUPEX said no “strangers” had used its internal showers. The army said it was unaware of such actions, for which there was no institutional support.

Baldin’s speech landed him in hot water with Moraes, who signed his temporary arrest warrant.

Undercover police swept the camp for three days before they identified Baldin in the Sinop section, the federal cop said, arresting him after nightfall on Dec. 6. They entered in plain-clothes, the officer added, or “there would have been war.”

Baldin told police he was “scared he would have to return his firearms due to the will of the new government;” he hadn’t meant to threaten Lula, nor impede him from taking office. He said “he had little schooling” and had worked since adolescence.

“It was very symbolic,” said the federal cop, as it took place outside the army HQ: “a stronghold where they thought they were untouchable.”

It also stoked resentment of Moraes among Bolsonaro’s supporters.

The crusading justice’s investigations have needled the president and jailed his allies. He has also policed social media, temporarily suspending access to messaging app Telegram and fining platforms that fail to remove fraudulent content.

Bolsonaristas deride Moraes as an unelected despot who has censored free speech and trampled on the president’s executive power. “He thinks he owns Brazil,” said Mello, the TikToker.

Moraes’ office did not respond to a request for comment. The judge has defended his actions as necessary steps to protect Brazil’s democracy.

On Dec. 9, Bolsonaro broke weeks of post-election silence with an ambiguous message many viewed as encouragement to his protesting supporters. “We will win,” he told them.

Three days later, Xavante was arrested at the request of Moraes for alleged-anti-democratic threats.

His detention was a tipping point.

Xavante’s followers chased the police vehicle carrying him back to the force’s headquarters. Others from the camp, including bomb-plotter Sousa, soon joined them and together they attempted to invade the building.

Xavante’s lawyer, Jessica Tavares, said her client had been incited by others and regretted his actions.