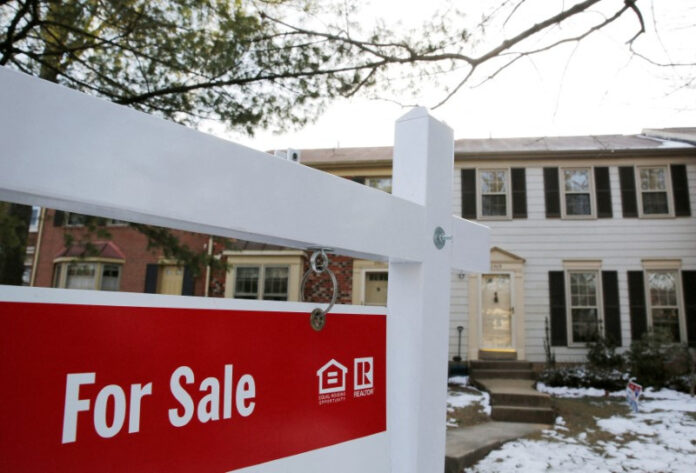 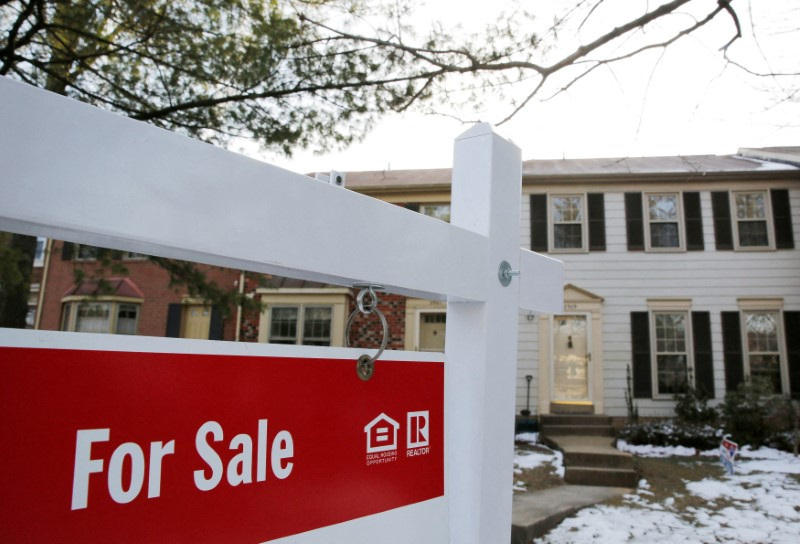 © Reuters. FILE PHOTO: A home for sale sign hangs in front of a house in Oakton in Virginia March 27, 2014

(Reuters) – Contracts to buy U.S. previously owned homes fell far more than expected in November, diving for a sixth straight month in the latest indication of the hefty toll the Federal Reserve’s interest rate hikes are taking on the housing market as the central bank seeks to curb inflation.

The National Association of Realtors (NAR) said on Wednesday its Pending Home Sales Index, based on signed contracts, fell 4% to 73.9 last month from October’s downwardly revised 77.0. November’s was the lowest reading – aside from the shortlived drop in the early months of the pandemic – since NAR launched the index in 2001.

Economists polled by Reuters had forecast contracts, which become sales after a month or two, would fall 0.8%. Pending home sales dropped 37.8% in November on a year-on-year basis.

“Pending home sales recorded the second-lowest monthly reading in 20 years as interest rates, which climbed at one of the fastest paces on record this year, drastically cut into the number of contract signings to buy a home,” said NAR Chief Economist Lawrence Yun. “Falling home sales and construction have hurt broader economic activity.”

Contracts declined in all four regions, led by a 7.9% drop in the Northeast. All four regions also recorded double-digit declines on a year-over-year basis, with contract signings in the West down by 45.7%, by far the largest regional drop.

“The Midwest region — with relatively affordable home prices — has held up better, while the unaffordable West region suffered the largest decline in activity,” Yun said.

The overall decline in signed contracts suggested that existing home sales would continue to fall after posting their 10th straight monthly decrease in November.

The housing market has suffered the most visible effects of aggressive Fed interest rate hikes that are aimed at curbing high inflation by undercutting demand in the economy. By the Fed’s preferred measure, inflation is still running nearly three times its 2% goal, having risen earlier in 2022 at its fastest pace in 40 years.

This month the Fed raised rates again by half a percentage point, capping a year that saw its benchmark rate shoot from near zero in March to between 4.25% and 4.5% now – the swiftest rates have risen since the early 1980s. Fed officials projected rates would climb further in 2023, likely topping 5%.

Unlike other parts of the economy – many of which have yet to show a significant impact from the Fed’s actions – the housing market has reacted in near real-time to the jump in borrowing costs engineered by the central bank.

The 30-year fixed mortgage rate breached 7% in October for the first time since 2002, more than doubling in the span of nine months. This pulled the rug out from what had been a red-hot housing market fueled by historically low borrowing costs and a rush to the suburbs during the coronavirus pandemic.

Data last week showed the combined annual sales rates of new and existing homes through November had slumped by 35% since January – among the fastest falls on record – to the slowest since late 2011. New single-family housing starts and permit issuance skidded to a two-and-a-half-year low last month as well.