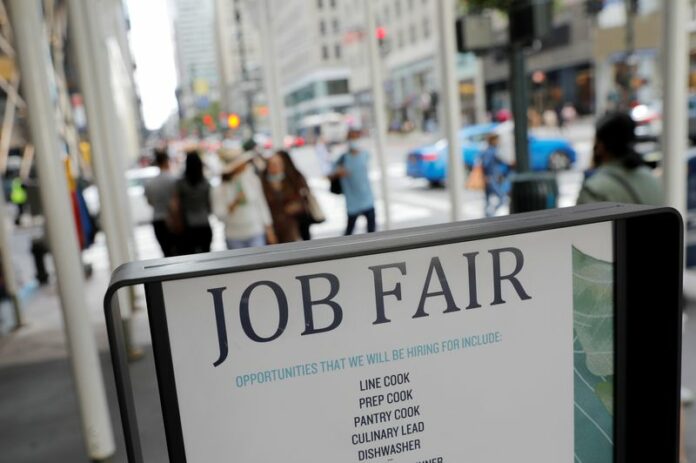 © Reuters. FILE PHOTO: Signage for a job fair is seen on 5th Avenue after the release of the jobs report in Manhattan, New York City, U.S., September 3, 2021. REUTERS/Andrew Kelly

(Reuters) – The number of Americans filing new claims for unemployment benefits edged higher last week but remain in a range indicating the U.S. job market remains tight, even as the Federal Reserve works to cool demand for labor as part of its bid to lower inflation.

Initial claims for state unemployment benefits rose 9,000 to a seasonally adjusted 225,000 for the week ended Dec. 24, the Labor Department said on Thursday. Economists polled by Reuters had forecast 225,000 claims for the latest week.

The claims figures have been choppy in recent weeks but have held well below the 270,000 threshold that economists see as a red flag for the labor market. A raft of layoffs in the technology sector and interest-rate sensitive industries like housing have yet to leave a notable imprint on claims as laid-off workers appear to cycle into new jobs with relative ease.

Federal Reserve Chair Jerome Powell – the chief architect of the central bank’s aggressive interest rate hikes aimed at bringing too-high inflation to heel – earlier this month said “it feels like we have a structural labor shortage out there.”

Indeed, the labor market’s resilience is a central focus for Fed policymakers, as the U.S. economy has minted an average of 392,000 new jobs a month this year despite rapid rate hikes and growing fears of a recession next year. Officials see that strength as providing ample room for them to continue to raise interest rates to bring down inflation, which by their preferred measure remains nearly three times their targeted level of 2% annually even if it has recently shown signs of heading lower.

Economists believe that companies are likely to cut back on hiring before embarking on layoffs. Employers have been generally reluctant to lay off workers after struggling to find labor during the COVID-19 pandemic.

The claims report showed the number of people receiving benefits after an initial week of aid rose 41,000 to 1.710 million in the week ending Dec. 17.

Those so-called continuing claims, a proxy for hiring, have drifted higher since early October, and the latest report is the first since February to show them reaching the trend level of 1.7-1.8 million that prevailed in the years leading up to the pandemic, a level seen then as emblematic of a tight labor market.