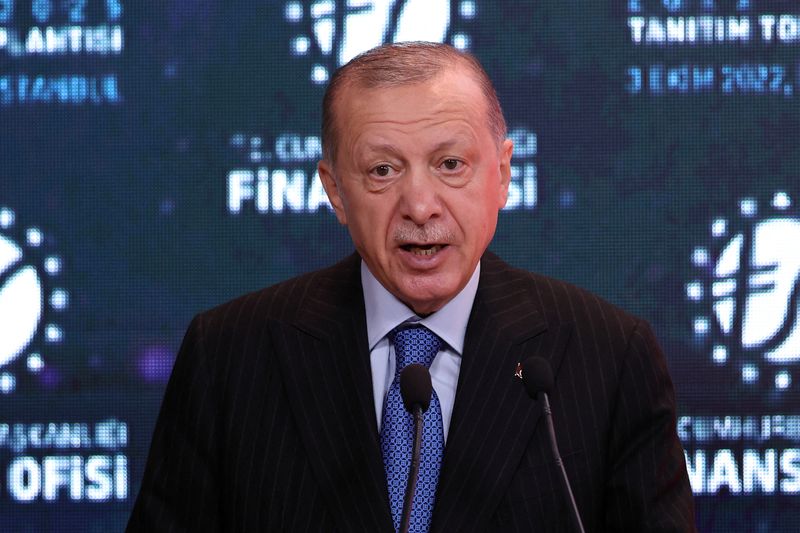 By Nevzat Devranoglu and Daren Butler

ANKARA (Reuters) – President Tayyip Erdogan’s decision to allow more than 2 million Turkish workers to retire early is his latest measure to ease economic hardships in the run-up to tight elections, and it will swell government spending to record levels.

The fiscal stimulus – also covering the minimum wage, gas bills and other areas – is seen directed at voters ahead of presidential and parliamentary elections that pose Erdogan’s biggest political test in two decades in power.

Opinion polls show the president and his ruling AK Party have shed support in recent years, as the currency tumbled and living costs rose. With inflation having touched a 24-year high, the vote in May or June is too close to call, the polls suggest.

Here is a snapshot of the economy, the budget, and the main measures Ankara has adopted so far:

The rate cuts sparked a lira currency crash a year ago and sent inflation soaring above 85% in October, leaving households struggling to afford basic needs such as food, energy and rent.

However, the lira has steadied in recent months, while inflation is expected to fall sharply next year, with Ankara forecasting end-2023 inflation of 24.9%. Economists and officials predict inflation of 40% at the time of the election.

Public finances are strong compared to Turkey’s emerging market peers, leaving plenty of room for stimulus. The 2023 budget includes 4.47 trillion lira ($239 billion) in spending and sees a deficit of about 3.5% of GDP for this year and next.

The record price tag for social aid accounts for 1.4% of the budget. Rollouts in the first days of 2023 will include winter energy subsidies, support for students, wage hikes for civil servants, a minimum wage increase and write-offs for some debt.

The raft of pre-election spending has been made cheaper by a slide in the government’s borrowing costs. A series of rules requiring banks to bulk up on treasuries drove 10-year yields down to single digits from a 26% peak.

Erdogan on Wednesday ditched an age requirement, enabling around 2.25 million people to retire immediately and delivering on a measure long sought by labour groups. It covers those who started working before September 1999 and who completed 20-25 years of social security-registered working life.

Bankers told Reuters they do not expect all those affected to retire immediately, and said the move could be inflationary.

Haluk Burumcekci, founder of Burumcekci Research & Consultancy, predicted an additional 1.8 million people would retire as a result of the change, on top of the 40,000-50,000 who already retire each month in Turkey.

“The annual salary burden is likely to reach approximately 150-180 billion lira, whereas the severance pay burden that will be shouldered by both the public and private sectors may exceed 300 billion lira,” he said.

Tera Yatirim said this would mean higher central government budget expenditure, potentially stoking more inflation. Yet the budget has outperformed expectations, with a headline deficit of just 1.2% of GDP as of November 2022, accompanied by a primary surplus of 1.0%, it added.

The hike, intended to blunt the sting of inflation, raised employers’ concerns over increased costs and layoffs. Ramazan Kaya, head of the Turkish Clothing Manufacturers’ Association, said prices would rise and jobs would be cut as a result.

Ismail Gulle, former head of the Turkish Exporters’ Association and current member of the Knitted Fabric Committee of the Istanbul Chamber of Industry, said the government would probably take steps to ease job losses including a possible short-term working allowance.

Spending on energy subsidies – especially fuel, electricity, natural gas – would reach 530 billion lira in 2023, up from 200 billion in 2021, according to a finance minister presentation.

A total of 142.9 billion lira has been earmarked for 2023 spending in the farm sector on support programmes and investment payments.