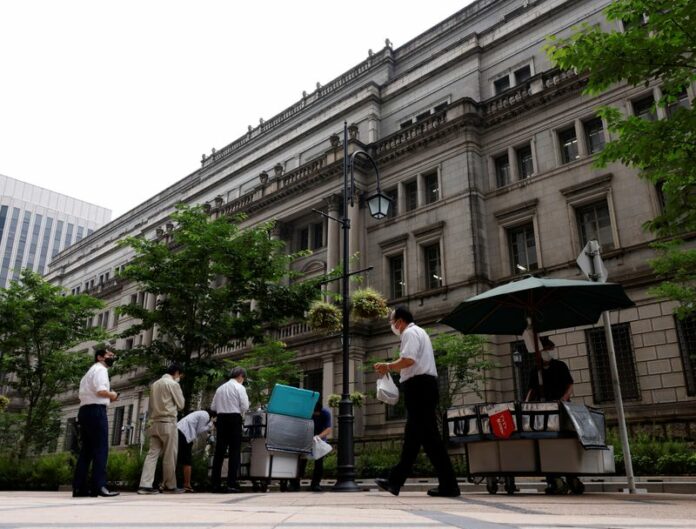 © Reuters. FILE PHOTO: People buy their lunches from street vendors in front of the headquarters of Bank of Japan in Tokyo, Japan, June 17, 2022. REUTERS/Kim Kyung-Hoon

TOKYO (Reuters) -The Bank of Japan is putting more emphasis on an inflation gauge that excludes fuel costs, and will likely raise its projections for the index’s growth in quarterly forecasts due this month, said three sources familiar with its thinking.

The upgrade would underscore the central bank’s growing conviction that robust domestic demand will allow firms to raise prices, and keep inflation sustainably around its 2% target in coming years.

But the upward revision alone was unlikely to trigger an immediate interest rate rise, because many BOJ officials saw a need to scrutinise annual spring wage negotiations and the fallout from U.S. interest rate hikes, the sources said.

“Price rises are broadening more than initially expected, a trend that could continue if wages rise enough,” one of the sources said.

“When stripping away one-off factors like government subsidies, trend inflation appears to be gaining momentum,” another source said, expressing a view that was echoed by the third.

The BOJ has traditionally used core consumer inflation, which excludes the effect of fresh food but includes energy costs, as a key gauge in producing forecasts and guiding policy.

But in April it also began issuing forecasts for “core-core” consumer inflation, which strips away the effect of both fresh food and energy costs, to better grasp the broad price trend driven by domestic demand.

With government fuel subsidies and scheduled utility bill hikes muddling this year’s price outlook, the BOJ was now focusing more on the core-core index in determining whether Japan could achieve sustained price rises, the sources said.

In fresh quarterly projections due this month, the BOJ would probably raise its core-core inflation forecasts for the current fiscal year ending in March and fiscal 2023, they said.

It might also slightly upgrade the forecast for fiscal 2024, depending on how the board viewed prospects for wage growth, the sources said.

The upgrades, which would push the outlook for core-core inflation closer to the BOJ’s target, will likely keep alive market expectations the central bank will phase out its ultra-loose policy when Governor Haruhiko Kuroda’s second five-year term ends in April.

In current forecasts, made in October, the board projected the average level of the core-core consumer price index this fiscal year will be 1.8% higher than in fiscal 2021. It expects fiscal 2023 and fiscal 2024 each to show rises in the index of 1.6%.

The BOJ will issue the quarterly forecasts after a two-day policy meeting that ends on Jan. 18.

Kuroda has dismissed the chance of a near-term interest rate hike on the view the BOJ must keep supporting the economy until the current cost-push inflation turns into a demand-driven one accompanied by higher wages.

But Japan’s long-term interest rates have crept up since the BOJ stunned markets last month by widening the band around its 10-year bond yield target, a move investors saw as a prelude to a future rate hike.

Core consumer prices in November rose 3.7% from a year earlier and analysts expect inflation to remain above the BOJ’s 2% in coming months, as companies continue to pass on higher costs to households.

Wage growth will be key to whether Japan’s fragile economy can withstand the hit from rising prices, and allow the BOJ to begin normalising monetary policy, analysts say.