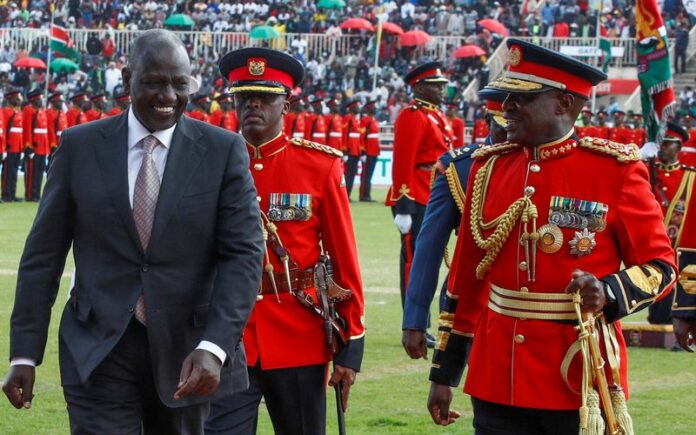 Kenya will not default on its debt payments -President Ruto 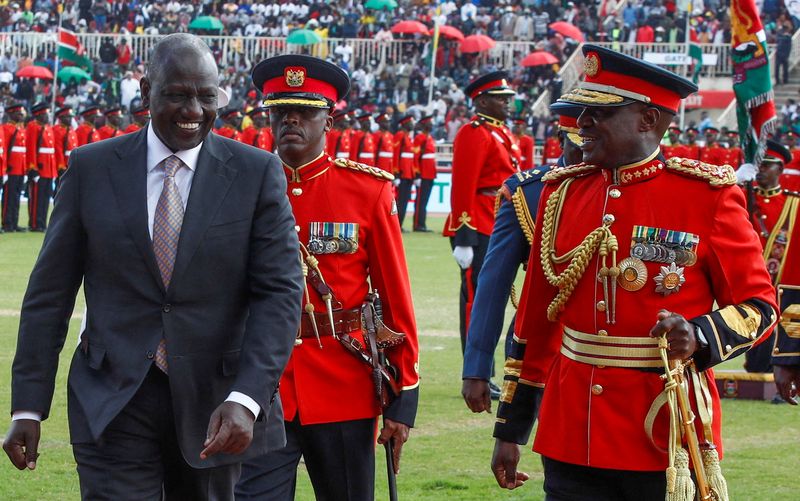 © Reuters. FILE PHOTO: Kenya’s President William Ruto is escorted by Robert Kibochi, Chief of Kenya Defence Forces, after inspecting a guard of honour by the Kenya Defence Forces during the country’s 59th Jamhuri Day or Independence Day celebrations at the Nyayo Nat

NAIROBI (Reuters) – Kenya will not default on its debt and plans to ramp up tax collection in the next two years, President William Ruto said on Wednesday.

Ruto’s government, which took over in September, has pledged to curb expensive commercial borrowing in favour of cheaper sources like the World Bank to reduce debt servicing pressures.

“This country of ours will not default. I want to give you my assurance. Our country will not default on our obligations. We have applied (the) brakes on any more borrowing,” Ruto said in a wide-ranging interview with Kenyan media outlets.

He added that the government aimed to collect an extra 1 trillion shillings ($8.11 billion) in taxes in the next 24 months, and reiterated plans to cut 300 billion shillings in borrowing in the current fiscal year that runs until the end of June.

Like other frontier economies, Kenya found it almost impossible to raise funds from international bond markets in 2022 due to a surge in yields.

In June it was forced to cancel the planned issuance of a Eurobond and is seeking alternative sources of funding.

In February last year, Fitch said rising government debt levels and global interest rates were increasing the risk of credit rating downgrades in as many as 10 African countries, with Kenya, Ghana, Lesotho, Namibia, Rwanda and Uganda most at threat.