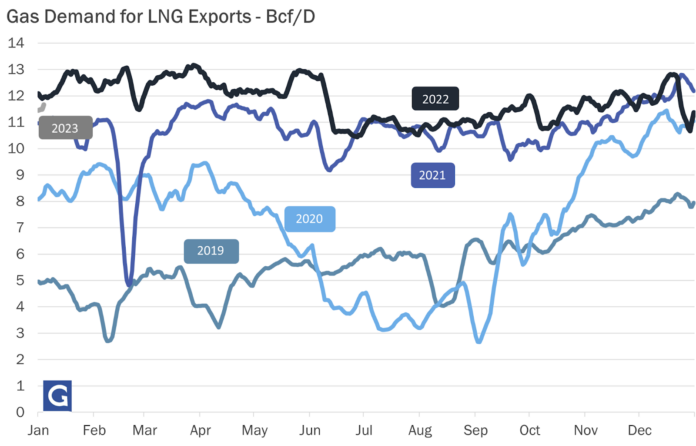 Unseasonable temperatures for the U.S. over the next fortnight, could stretch to February
Switzerland, Poland, Hungary, France and Germany also see warmer-than-usual weather
Weekly U.S. gas storage due today could be bullish due to strong late Dec heating draw

Gas bulls’ worst fears may have come true: Two weeks into the winter, and the U.S. feels like it’s in mild fall. Those in Europe, meanwhile, could be excused for thinking that the summer never went away.

Blame it on global warming or Vladimir Putin’s aspirations for a European freeze that has yet to happen. Whatever the case, natural gas, the primary fuel for heating in most Western countries, is getting little love at this time of the year on both sides of the Atlantic due to unseasonably high temperatures.

Hundreds of sites in Europe, from Switzerland to Poland, have seen their winter temperature records go awry in the past fortnight. Hungary registered its warmest Christmas Eve in Budapest and saw temperatures climb to 18.9 degrees Celsius (66.02°F) on Jan. 1.

In France, where the night of Dec. 30-31 was the warmest since records began, temperatures climbed to nearly 25°C in the southwest on New Year’s Day while normally bustling European ski resorts were deserted due to a lack of snow.

The Weather Service in Germany, where temperatures of over 20°C were recorded, said such a mild turn of the year had not been observed in the country since records began in 1881.

Czech Television reported some trees were starting to flower in private gardens, while Switzerland’s Office of Meteorology and Climatology issued a pollen warning to allergy sufferers from early blooming hazel plants.

The temperature hit 25.1°C at Bilbao airport in Spain’s Basque country. People basked in the sun as they sat outside Bilbao’s Guggenheim Museum or walked along the River Nervion. Bilbao resident Eusebio Folgeira, 81, said in comments carried by Reuters: “It always rains a lot here, it’s very cold, and it’s January, (but now) it feels like summer.”

In the United States, forecasters said expectations are high for unseasonably warm weather to continue into next week and the week after that – potentially stretching into February.

The result is a price plunge in gas futures, with an intensity not seen in a while. On the New York Mercantile Exchange’s Henry Hub, they tumbled beneath the $4 marker to touch lows not seen in almost a year.

In Europe, benchmark Dutch gas fell below $75 — down more than 50% from a month ago and plumbing a trough not seen before the start of the Ukraine war in February.
Europe’s natural gas storage surplus versus the five-year average is hovering near 549 billion cubic feet — or bcf.

European gas storage stocks remained above 80% capacity in the first week of January. Should this trend continue, European inventories could remain so well supplied that they might negatively impact U.S. exports of liquefied natural gas, or LNG, to the E.U. Houston-based energy markets consultancy Gelber & Associates said in a note to its clients in natural gas on Wednesday:

“The biggest driver behind the price weakness is that the near-term temperature outlook through mid-January lacks any meaningful below-average temperatures and is nearly devoid of any Arctic air.”

But what does this particularly mean for the Henry Hub?

It could mean more temperature-related snafus that could extend the pain of NYMEX gas bulls for another week said Gelber, adding:

“Because of this, the underlying supply/demand imbalance has shifted to the bearish side of the spectrum as projected daily natural gas storage withdrawals will remain bearish versus the five-year average through at least Jan. 12.

As such, it will be a hard-fought battle for estimated gas storage to fall below 2,700 billion cubic feet by mid-January, while it’s not out of the question that the storage deficit versus the five-year average could transition to a surplus in the same timeframe.”

Market participants will know later today what the storage picture for U.S. gas is looking like when the Energy Information Administration, or EIA, unveils its latest inventory report for the final week of 2022, ending Dec. 30.

In an anomaly to the warmth market participants are feeling, the EIA is expected to report that U.S. utilities likely pulled 228 bcf, or billion cubic feet, of natural gas from storage last week, drawing over twice the usual amount in the wake of a winter storm, a Reuters poll showed on Wednesday.

The forecast for the week ended Dec. 30 would cut stockpiles to 2.884 trillion cubic feet (tcf), about 9.8% below the same week a year ago and 6.9% below the five-year average.

There were around 196 heating degree days (HDDs) last week, which is higher than the 30-year normal of 186 HDDs for the period, according to data provider Refinitiv.
HDDs, which are used to estimate demand to heat homes and businesses, measure the number of degrees a day’s average temperature is below 65 Fahrenheit (18 Celsius).

Expectations for this relatively-bullish draw were what put a floor under the free-falling Henry Hub gas market on Wednesday, with the front-month February contract settling up more than 18 cents, or nearly 5% on the day, at $4.172 per mmBtu, or metric million British thermal units. Prior to that, February gas lost almost $1.30 over five days of trading, crashing below the $4 per mmBtu support on Tuesday.

But this EIA gas storage update could be followed by more bearish inventory reports due to conditions that would dampen demand and ease pressure on supplies in storage.
Mizuho Securities’ director of energy futures, Robert Yawger, said in comments carried by naturalgasintel.com that traders “are betting that 2023 storage will post smaller numbers in coming weeks that reflect the warm temperatures across the U.S., with a good chance storage switches to a surplus to the five-year average.”

What would be the price impact on the Henry Hub then if storage reports turned bearish again?

Consolidation from support areas can initiate a rebound towards $4.23, which upon finding buyers, can establish support above $4.50. But further upside will require firm acceptance at above $4.50.”