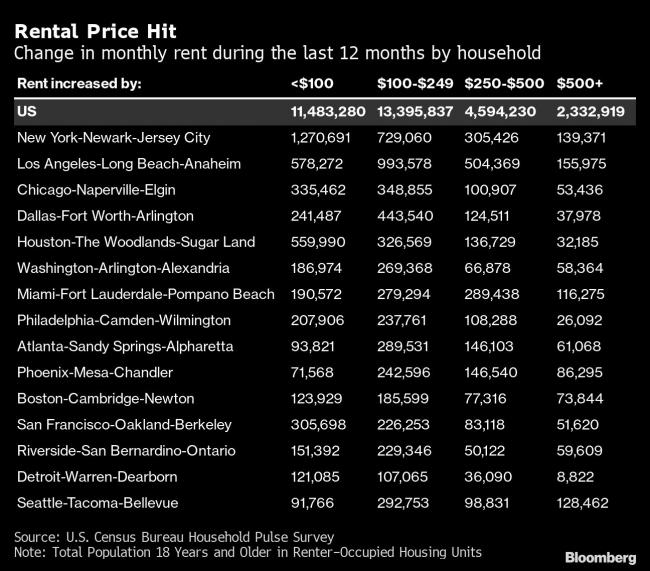 Most US Renters Say Annual Bill Climbed by More Than $1,000

(Bloomberg) — More than half of US renters say their annual bill climbed by at least $1,200 over the past year amid a housing-market squeeze, according to the Census Bureau.

About 55% of respondents, equivalent to about 32 million people, said their monthly rents are up at least $100 in the period, according to the bureau’s new Household Pulse survey published on Thursday. For some 2.3 million renters, the increase was more than $500.

The latest housing-market data suggests that the pandemic-driven surge in rental prices may be easing or even going into reverse in some markets. Still, for for millions of households the damage is already done: they’ve signed leases that lock in a steep increase in their shelter costs.

The biggest rent increases aren’t confined to high-income households, according to the Census report. More than 1.4 million renters with annual household incomes of less than $75,000 reported a monthly payment increase of $500 or more during the past 12 months.

Cities including Miami, Phoenix and Seattle had a relatively large share of jumbo rent hikes relative to their population, while in some major east-coast metropolises including New York the increases were typically smaller.

The Census Bureau’s Household Pulse survey, which has been conducted regularly since Covid-19 was declared a pandemic, is designed to provide timely data on how the health crisis has affected the lives of Americans.