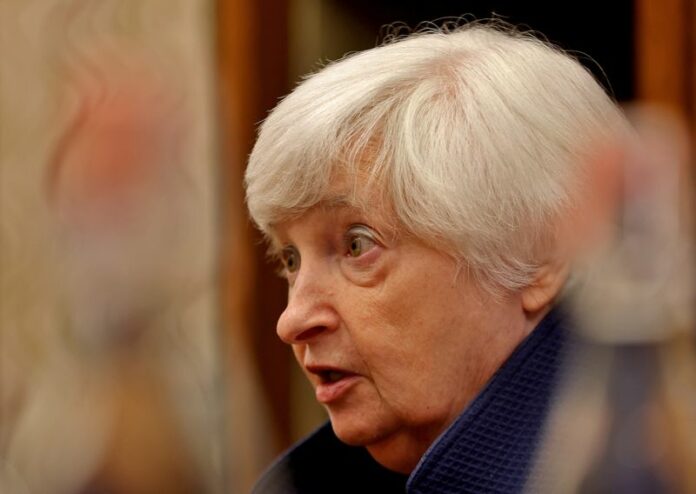 WASHINGTON (Reuters) – U.S. Treasury Secretary Janet Yellen is digging in to oversee billions of dollars in federal climate and infrastructure spending that she believes will transform the economy, close associates say, defying demands from Republicans to step down.

Yellen’s oversight of about $270 billion in tax credits for electric vehicles, home solar panels and other climate purchases contained in the Inflation Reduction Act have made her a pivotal climate figure in President Joe Biden’s administration.

But the high profile, as well as signals from markets and some economists of a coming recession, are expected to intensify demands from Republicans for Yellen, 76, to step down, citing her too-rosy inflation forecasts and her failure to rein in federal spending that they say is to blame.

Yellen has also clashed with Republican lawmakers over the statutory limit on U.S. debt, warning that a failure to raise the debt ceiling threatened America’s credit rating and could disrupt financial markets.

Yellen told CNBC late last year that she was “in good company” in misjudging inflation, and that Biden’s COVID spending plans were needed to boost the recovery.

She has publicly and repeatedly shaken off speculation that she would step aside midway through Biden’s four-year term, steeled by what close associates say is her confidence in Biden’s continuing support.

The White House and Treasury had no immediate comment on a Bloomberg report saying that Biden asked her personally to stay on.

White House and Treasury officials say inflation was spurred by supply chain problems and exacerbated by Russia’s invasion of Ukraine, but note that inflation is now easing and investments in manufacturing will reduce future supply chain log-jams.

“Secretary Yellen is all-in on making sure we achieve the dual goals of reducing emissions and rebuilding American industry,” Senator Ron Wyden, who chairs the Senate Finance Committee, told Reuters in an emailed statement.

The first woman to serve as Fed chair and Treasury secretary, Yellen in December presided over another milestone: the launch of the first U.S. banknotes signed by two women.

While Republicans broadly supported Yellen’s confirmation as Treasury Secretary, some say they are disappointed by what they see as her too-progressive agenda, including a drive to forgive student debt, which economists say could add $300 billion to $600 billion to the federal debt.

“Sadly, she is living proof that when financial aptitude is made subservient to ideology, even the talented fall from grace,” EJ Antoni, a research fellow at the conservative Heritage Foundation wrote in a recent blog post.

Republicans, who now control the House of Representatives, have launched a probe of Yellen’s advisory committee on racial equity, saying it would further politicize the department, and are eyeing an investigation into her proposal for a 15% minimum global corporate tax.

In a letter to Yellen in December, senior Republicans including Senator Jim Risch and Representative Kevin Brady said the tax would have a negative impact on U.S businesses and criticized Yellen for not responding to their concerns.

Treasury had no comment on the Republican concerns, but officials have previously said the department’s policies are overdue and urgently needed.

In addition to advancing Biden’s domestic climate agenda, Treasury officials say another key priority for Yellen in 2023 will be advancing reforms of the World Bank and other multilateral lenders to free up more resources for countries to address climate change and other priorities.

Yellen, who has logged about 100,000 miles of air travel in the job, leaves next week for Africa, with stops planned in Senegal, Zambia and South Africa, as part of a broader U.S. push to counter China’s outsized influence on the continent.

The secretary’s mounting frustration with Beijing – now the world’s largest creditor – for not moving forward more quickly to restructure the debt of low-income countries in Africa will be a key issue, especially in Zambia, Treasury officials say.

“Janet Yellen has restored the United States to the center of the multilateral system, in terms of global economics,” said Kevin Gallagher, who heads the Global Development Center. “Will it be perfect? No, but at least the United States isn’t facing 100% inward, which is the way it was a couple of years ago.”