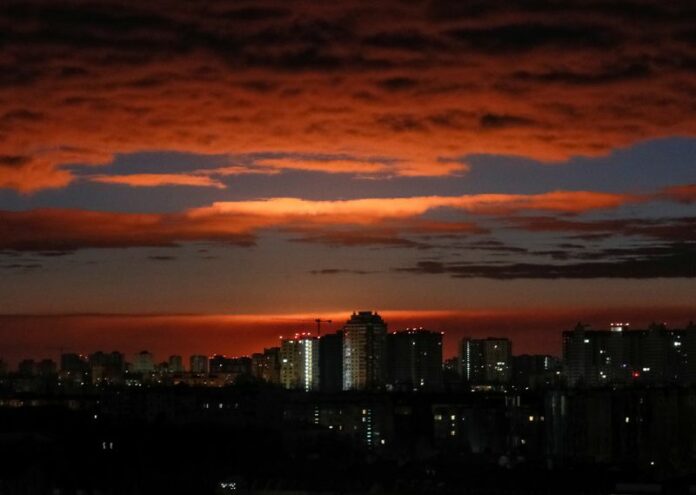 © Reuters. FILE PHOTO: A glow is seen over the city’s skyline during a shelling, following Russia’s invasion of Ukraine, in Kyiv, Ukraine February 28, 2022. REUTERS/Gleb Garanich

KYIV (Reuters) -Consumer price inflation in Ukraine rose to 26.6% in 2022 as the economy felt the impact of Russia’s invasion, but was lower than initially expected.

The government had said CPI could soar from 10% in 2021 to about 30% because of the war, which has disrupted supply chains and logistics, but State Statistics Service figures released on Tuesday showed inflation had stabilised at 0.7% in December.

The central bank has attributed the steadying of inflation to a government decision not to raise wartime utility tariffs – despite Russian attacks on energy facilities that have led to electricity shortages – and an improved supply of food products.

“Fuel prices had a significant impact on inflation in the first half of 2022 but they have stabilised since then despite a return of excise duties for petrol and diesel,” ICU investment house said in a research note.

“We think low domestic demand coupled with a gradual resolving of Union in 1991, but the logistics problems will lead to an easing of inflationary pressures.”

GDP data released last week also suggested the Ukrainian economy has adapted better than initially expected to the realities of war, thanks to high levels of foreign aid and the flexibility of Ukrainian businesses.

Despite these signs of resilience, electricity shortages are likely to be a challenge for businesses, keeping inflation pressures high.

Ukraine’s Institute for Economic Research said business sentiment had deteriorated at the end of 2022, with 78% of businesses saying that disrupted supplies of electricity, water and heat were a key problem for them.