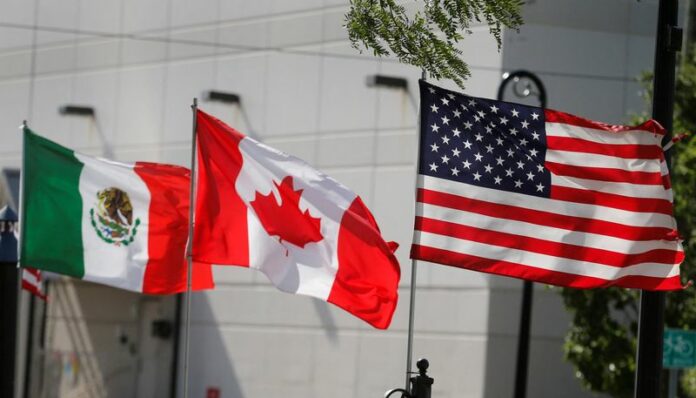 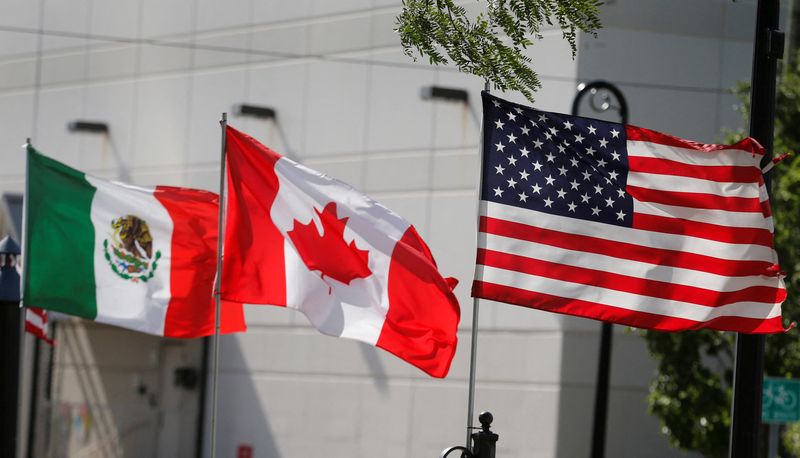 © Reuters. FILE PHOTO: Flags of the United States, Canada and Mexico fly next to each other in Detroit, Michigan, U.S. on August 29, 2018. REUTERS/Rebecca Cook/File Photo

OTTAWA (Reuters) – Canada and Mexico have won their challenge to the U.S. interpretation of content rules for autos under the new North American trade pact, a dispute panel ruled on Wednesday, a decision that favors parts makers north and south of the U.S. border.

A year ago Canada and Mexico filed a complaint against the United States over how to apply automotive-sector content requirements under the United States-Mexico-Canada (USMCA) free trade agreement, which came into effect in 2020.

The U.S. interpretation of the rules is “inconsistent” with the USMCA, the panel said in its ruling.

Canada “is glad to see that the dispute settlement mechanisms in place are supporting our rights and obligations negotiated in USMCA,” Canadian Trade Minister Mary Ng said in a statement.

“This is excellent news,” said Tatiana Clouthier, Mexico’s former economy minister in a video on Twitter. “That helps the entire automotive industry in the North American region enormously.”

The decision is “disappointing,” said Adam Hodge, a spokesperson for the United States Trade Representative’s office, adding that the decision could result in “fewer American jobs”.

Under the USMCA, the United States must now agree with Canada and Mexico on how to apply the panel decision, or face possible retaliatory tariffs.

“We are reviewing the report and considering next steps,” Hodge said. The USTR will now “engage Mexico and Canada on a possible resolution to the dispute,” Hodge said.

“In the coming days, Mexico will begin a process of dialogue and cooperation with its trading partners,” Mexico’s economy ministry said in a statement after the ruling.

The decision was announced amid a separate USMCA dispute centered on energy that has pitted the United States and Canada against Mexico. Ottawa and Washington argue Mexico’s energy policies are putting U.S. and Canadian firms at a disadvantage, while Mexico has defended its policies and said it has broken no laws.

Under USMCA, 75% of a vehicle’s components must originate in North America to qualify for tax-free status, but the United States disagreed with how to calculate that number.

Mexico and Canada said if a “core part,” such as the engine or transmission, has 75% regional content, the USMCA allows that number to be rounded up to 100% when calculating the broader requirement for an entire car’s regional content.

The United States said “core part” content should not be rounded up when determining the content of the entire car.

Volpe said the decision also is important because it demonstrates that disagreements can be settled under the rules of the new trade pact.

“It shows that the dispute-resolution vehicle within the USMCA works,” Volpe said.