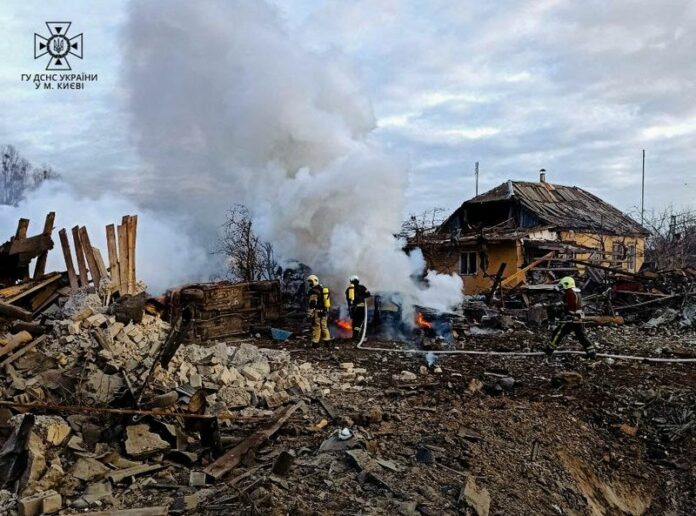 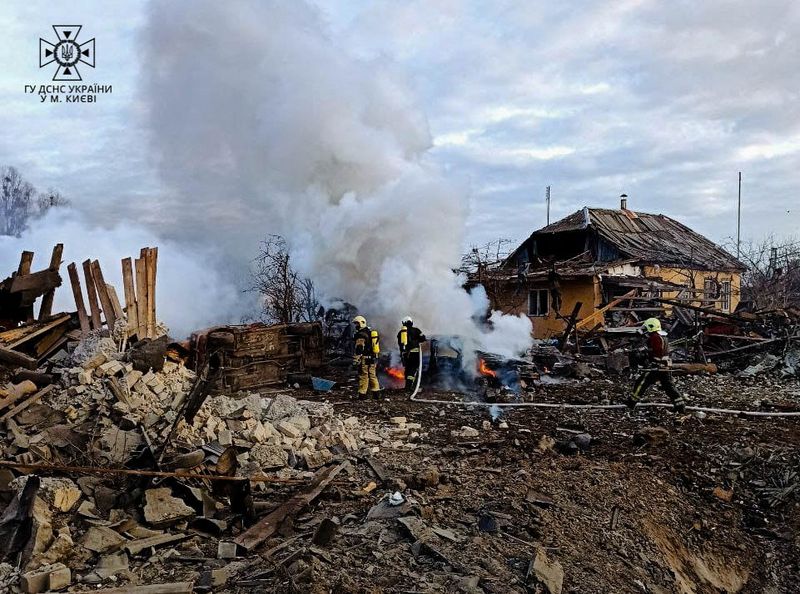 © Reuters. FILE PHOTO: Rescuers work at a site of private houses heavily damaged by a Russian missile strike, amid Russia’s attack on Ukraine, in Kyiv, Ukraine, in this handout picture released December 29, 2022. Press service of the State Emergency Service of Ukrai

DNIPRO/KYIV (Reuters) – Russia unleashed a new wave of major attacks on Ukraine on Saturday, hitting energy infrastructure across the country and killing at least 12 people in a missile strike on a nine-storey apartment building in the city of Dnipro, officials said.

Rescue teams toiled through the night in freezing temperatures in the aftermath of the Dnipro attack, in east-central Ukraine, with local officials saying people were still alive underneath the massive pile of wreckage.

“They keep sending SMS-es,” Mikhailo Lysenko, deputy mayor of Dnipro said in a social media video. “We stop our work now and then to keep silence and we hear people scream from underneath the rubble.”

Russian strikes also hit critical infrastructure in Kyiv and other places, with Ukraine’s energy minister saying the coming days would be “difficult” with threats to the supply of electricity, running water and central heating at the height of winter.

President Volodymyr Zelenskiy said the number of those killed in the Dnipro apartment attack was likely to rise and he issued a fresh appeal to his Western allies for more weaponry to end “Russian terror” and attacks on civilian targets.

“More security assistance is coming to help Ukraine defend itself,” Brink said on Twitter, calling the strike on Dnipro “horrifying.”

Kyrylo Tymoshenko, deputy head of Zelenskiy’s office, said 37 people had been rescued from the building and a total of 64 were injured. Zelenskiy said the second to ninth floors of the building’s damaged section had collapsed.

Pictures posted on Dnipro Mayor Borys Filatov’s Telegram account showed residents with no equipment desperately removing what remained of a wrecked car and combing through rubble against the background of a large pile of metal and concrete. Wounded people were carried away on stretchers.

“You used to come to our city! We treated you as normal people, as relatives. What have you done to my son?” a woman, restrained by rescuers, shrieked in a video from the scene.

Another person was killed and one wounded in the steel-making city of Kryviy Rih where six houses were damaged in Zelenskiy’s hometown, mayor Oleksandr Vilkul said.

Further east in Ukraine’s Donbas region – the focal point of Russia’s drive to capture more territory – Ukraine’s forces were battling to hold onto control of the small town of Soledar. Russia has sacrificed large numbers of troops and resources to try to secure a gain after months of setbacks.

In Soledar, where Russian forces have refocused attacks after failing to take the larger nearby centre of Bakhmut, Ukraine insisted that its forces were battling to hold the town.

Russia said on Friday that its forces had taken control of the town with a pre-war population of 10,000, in what would be a minor advance, but one holding psychological importance for Russian forces who have suffered months of battlefield setbacks.

But officials acknowledged the situation was difficult, that street fighting was raging and Russian forces were advancing from various directions.

“Our soldiers are constantly repelling enemy attacks, day and night,” Deputy Defence Minister Hanna Maliar said on Saturday. “The enemy is sustaining heavy losses but is continuing to carry out the criminal orders of their command.”

Reuters could not immediately verify the situation in Soledar.

In his nightly video address, Zelenskiy appealed to the West to supply more weapons and repeated Kyiv’s stance that the only way to end the war was on the battlefield.

“What’s needed for this? The kind of weapons that our partners have in stockpiles and that our warriors have come to expect. The whole world knows what and how to stop those who are sowing death,” he said.

Saturday’s attack comes as Western powers consider sending battle tanks to Kyiv and ahead of a meeting of Ukraine’s allies in Ramstein in Germany next Friday where governments will announce their latest pledges of military support.

Russia, which invaded Ukraine last February, has been pounding its energy infrastructure with missiles and drones since October, causing sweeping blackouts and disruptions to central heating and running water. Ukraine shot down on Saturday 25 of 38 Russian missiles of different types, the Air Force said.

Missiles struck infrastructure in Kharkiv in the east and Lviv in the west, officials said. Zelenskiy said Kyiv region and Kharkiv regions had suffered the worst power disruptions.

President Maia Sandu of Moldova, the ex-Soviet state to the west of Ukraine, denounced the strikes, which left missile debris strewn just inside the country’s border.

“We strongly condemn today’s intensified attacks of Russia & stand with those who lost loved ones in Dnipro & across Ukraine,” Sandu, strongly backed by Western nations, said on Twitter. “Peace must prevail.”

“Atrocities, mass killings, attacks on residential buildings – like today in Dnipro – will never be forgiven& forgotten,” Nausėda said on Twitter. “The time for accountability will come.”