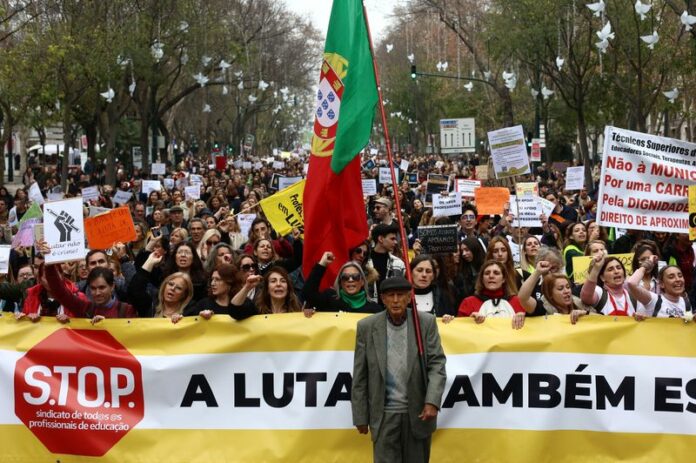 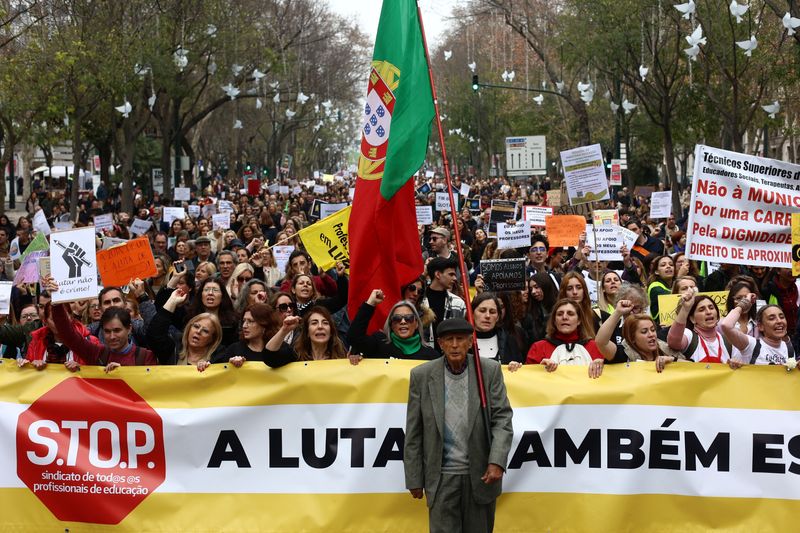 By Catarina Demony and Miguel Pereira

LISBON (Reuters) – In a fresh blow to Portugal’s government, tens of thousands of Portuguese teachers and school staff poured into the streets of the capital Lisbon to demand higher wages and better working conditions in one of the biggest protests of recent years.

During the peaceful demonstration, organised by the Union of All Education Professionals (STOP), protesters held banners and shouted slogans as they urged Education Minister Joao Costa to step down.

Teachers on the lowest pay scale make around 1,100 euros ($1,191.08) per month and even teachers in the top band typically earn less than 2,000 euros monthly. Protesters say current wages are too low, particularly given the cost of living crisis.

“Teachers deserve a fair salary because we’ve worked all our lives… we’ve never been corrupt and we’ve never stolen like the bad example that is unfortunately coming from politicians,” 62-year-old history teacher Maria Duarte said as waited for the march to kick off.

The Socialists, led by Prime Minister Antonio Costa, won an outright parliamentary majority in an election a year ago but the government has had a bumpy ride since then, with 13 ministers and secretaries of state leaving their roles, some over allegations of past misconduct or questionable practices.

“It would be good for the leaders who are watching this demonstration to think very carefully about what they are going to do next because we want this to have consequences; we want serious measures to be taken,” said maths teacher Aitor Matos.

The 47-year-old said teachers were “constantly losing income” and were often placed in schools far from home.

Protesters, some wearing black to mourn the state of the education sector, said the government has done little to improve their situation.

“We have to be respected,” said special needs teacher Lucinda Lopes, 52. “They must give us what is rightfully ours and they can’t take away the little we have.”

Teachers across the country have been on strike since early December, leaving many students unable to attend lessons. The education minister said on Friday he might force some teachers back to work by decreeing minimum services.