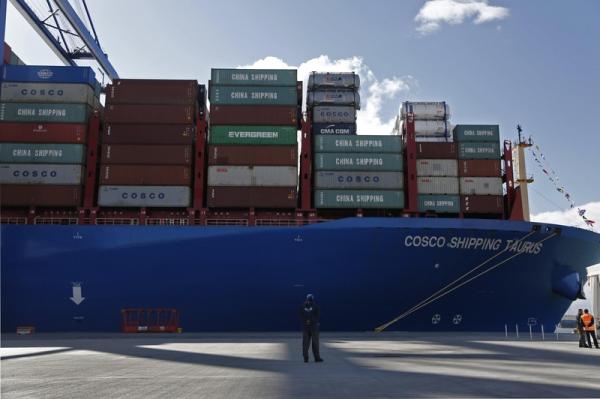 BEIJING (Reuters) – China’s exports growth is expected to have cooled only slightly in June, possibly further boosting a trade surplus with the United States in a test for Beijing as it tries to weather a volley of U.S. tariffs on its goods that many fear could harm its economy.

The Trump administration on Tuesday raised the stakes in its trade dispute with China, saying it would slap 10 percent tariffs on an extra $200 billion worth of Chinese imports, including numerous consumer items.

Washington’s latest move came only days after it imposed 25 percent tariffs on $34 billion of Chinese imports, drawing rapid retaliatory duties by Beijing on the same amount of U.S. exports to China.

All the same, given the most recent round of tit-for-tat tariffs went into effect only on Friday, there has been little impact on China’s overseas shipments to date.

“All in all, the trade impact of the first round of the tariff should have a very limited impact on China’s exports to the U.S., with the maximum loss of $5 billion,” Alicia Garcia Herrero, Chief Economist at Natixis Asia Research, wrote in a recent note.

That view was backed by the Reuters poll of 39 economists, which forecast Chinese exports growth of 10 percent year-on-year in June, cooling slightly from a 12.6 percent rise in May.

China’s Ministry of Commerce said last week it would encourage exporters to develop new export markets, and would also use funds collected from tariffs to ease the impact from U.S. trade actions on companies.

Imports growth was also expected to remain solid at 20.8 percent last month, the third straight month of 20-plus percent growth, albeit slowing again from the 26 percent surge in May.

FOCUS ON CHINA’S US TRADE SURPLUS

There is also likely to be considerable focus on the U.S.-China trade balance as U.S. President Donald Trump has railed against China’s sizable surplus with the world’s no. 1 economy and has demanded Beijing take measures to cut it.

The poll showed China’s overall trade surplus likely widened to $27.61 billion in June from $24.92 billion in May. There was no separate forecast on China’s trade surplus with the United States which has continued to grow even as its total surplus has narrowed over the last two years.

China ran a $375 billion goods trade surplus with the United States in 2017.

Worryingly, there have been few signs that either Beijing or Washington are prepared to ratchet down the trade frictions.

China said on Wednesday that the latest U.S. actions were “completely unacceptable” and that it would be forced to respond.

While there have been few signs the trade tussle is having a broader impact so far, analysts expect China’s export growth to slow in the second half of the year and fear that a prolonged row with the U.S. could put an already slowing economy on the skids.

The commerce ministry confirmed last month that Chinese exporters were front-loading shipments to the U.S. to get ahead of expected tariffs – a situation that could exacerbate any slowdown in shipments toward year-end.

“I think Chinese leaders do think they will obviously be hit significantly by all this damage from a trade war but they think they can probably ride it out economically,” said Louis Kuijs, Hong Kong-based Head of Asia Economics at Oxford Economics.